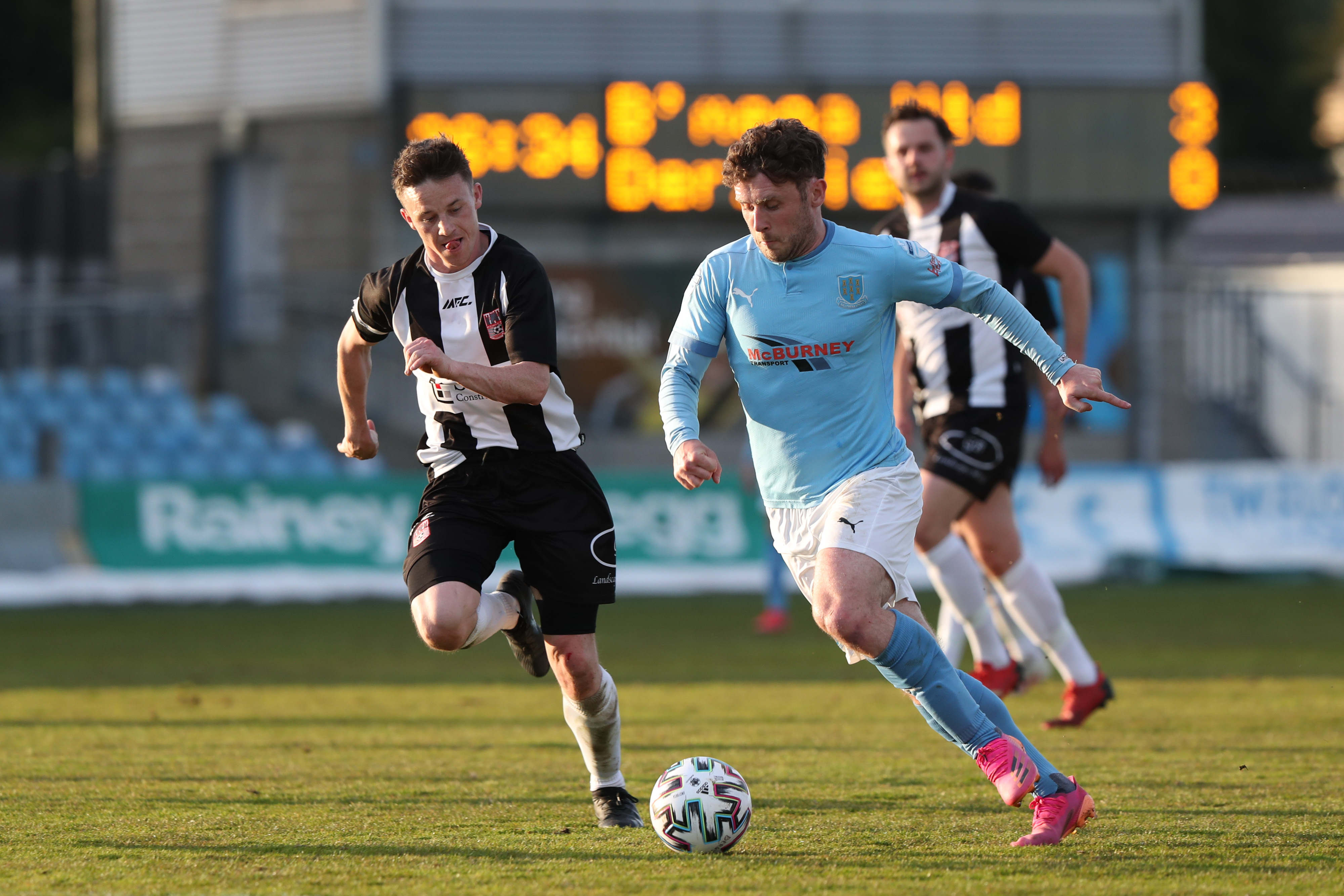 Ballymena United have secured a Sadler's Peaky Blinder Irish Cup semi-final spot after a comfortable 5-0 win over Dergview at the Showgrounds on Tuesday evening.

There was just one change to United's team from recent weeks and it came in goal as Ross Glendinning returned from injury to start. Just like the PSNI on Saturday, Dergview started well and early on Cathal Farren struck wide from distance and Sean McCarron curled one into Glendinning's arms.

United couldn't have come closer to leading in amongst Dergview's bright spell as Shay McCartan's run and ball in ended with Garth Falconer turning the ball onto his own post. The deadlock was broken on fifteen minutes as three United goals in five minutes all but put the tie to bed. Ross Redman's ball in found Leroy Millar but he took a swing and a miss, however the ball fell to Shay McCartan who calmly side-footed home.

Three minutes later it was 2-0 when the Braidmen won the ball back down the left flank and Redman found Ryan Waide in acres of space in the box, as he took his time to pick his spot and fire home.

On twenty minutes Dergview's night went from bad to worse as United extended the lead to three. Kofi Balmer had a header from a corner punched clear by the 'keeper, but it fell to Trai Hume who fired home his fourth of the season from the back.

With Ballymena now tormenting Dergview's back-line, Stephen Curry cleared off the line beford Millar's rebound effort deflected inches wide. Dergview kept themselves interested and almost had a goal back when Farran stayed onside from a long ball forward, but Glendinning did well to save.

After the frantic five minutes for the goal, the half rather expectantly petered out a bit with United possibly saving legs and Dergview deflated from the goal spree. Late on in the half McCartan went close and Waide cut the ball back for Josh Kelly who was denied by a good Paul Wells save, as the Sky Blues eased into half-time with a 3-0 lead.

Ballymena came back out for the second half well, but after Millar had tested Wells from distance, the visitors almost scored a screamer as Matthew Kirk's dipping volley from outside the box flew just wide.

On fifty-eight minutes United hit four goals for the third game out of three in the Irish Cup as Redman registered yet another assist in his stellar season. A ball from the right came right across the box to Redman at the far side, and he crossed for Paul McElroy who acrobatically smashed the ball home to give the front three a goal each.

On the hour mark Ballymena rattled the woodwork for the second time as, unsurprisingly, Redman crossed for Waide who whose shot came back strongly off the crossbar. It would be five shortly afterwards with more than one United player claiming the goal. Andy McGrory's corner from the left was eventually bundled home on the line, with Paul McElroy claiming the final touch, but it seemed to come off Balmer for his third in two games.

After Millar had again worked Wells, United used the final twenty minutes to get fresh legs on as Owen McKeown and Kenny Kane entered the fray, as well as Conor Keeley who returned from injury.

Kane could've grabbed himself a goal shortly after coming on when the ball ricocheted into his path, but in a decent position he skewed his effort wide. Late on in the piece McGrory almost got in on the act when he was picked out by Kane, but his looping header was well saved again by Wells, who tipped over the crossbar.

However it was another comfortable nights work for United in the cup, who made it fourteen goals in their three games to book their semi-final spot at Mourneview Park a week today, when they'll face league Champions elect Linfield.