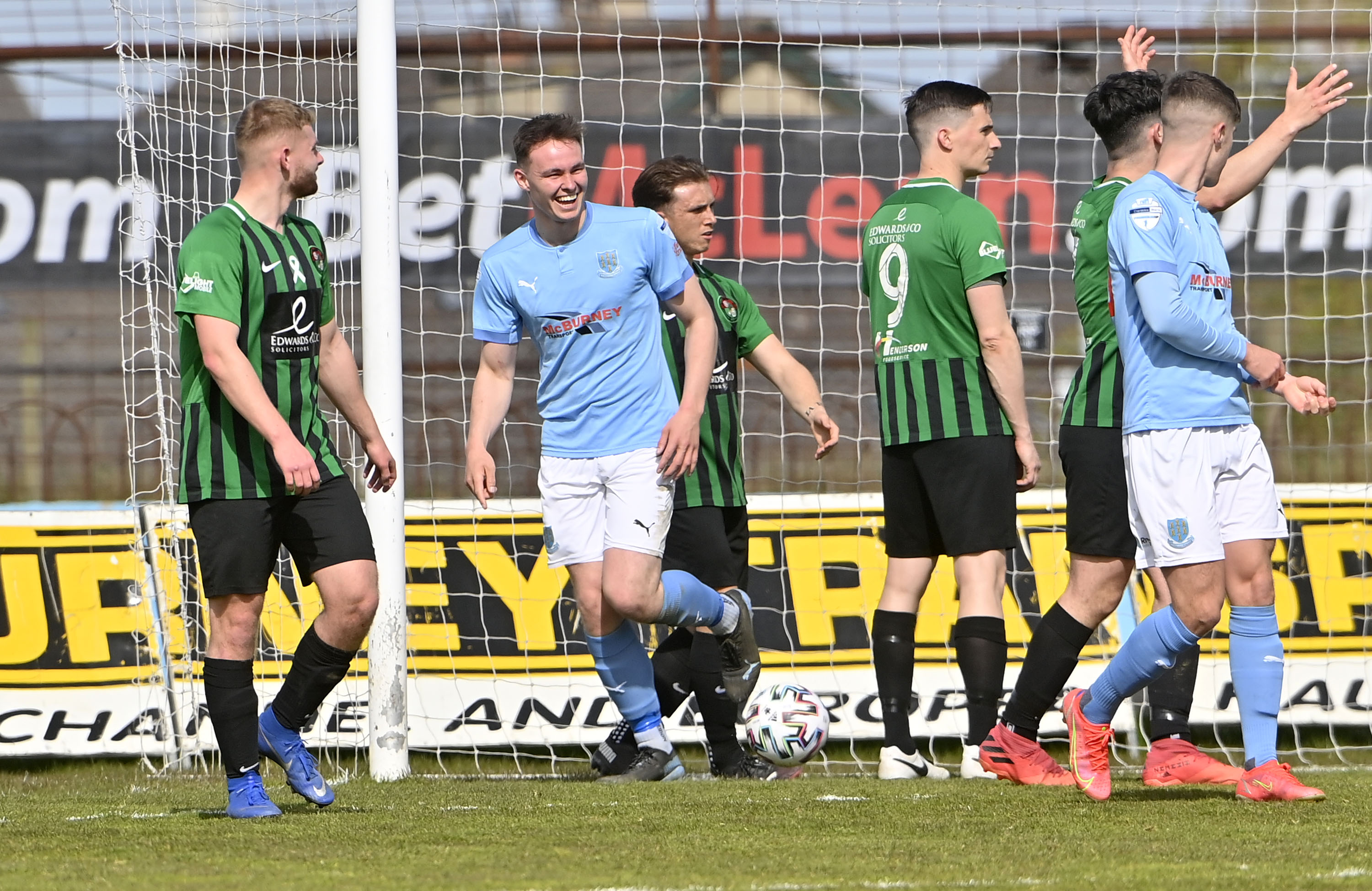 Ballymena United cruised into the quarter-finals of the Sadler's Peaky Blinder Irish Cup with a routine 5-0 win over PSNI at The Showgrounds this afternoon.

United were again unchanged as they looked to progress past a PSNI who had played just one competitive game since the pandemic began over thirteen months ago, but to the away side's credit, they started on the front foot.

The closest the lower league side came however was a cross from Paul McDowell that Jordan Williamson had to come and gather well, and at the other end Ballymena were creating. After Andy McGrory had stabbed a good chance wide, Leroy Millar had a header at the back post go across goal where Shay McCartan looked set to tap it in, but he decided to leave and it drifted wide.

McCartan was given a chance to quickly put it right when two minutes later his free kick struck the hand of PSNI captain Tony Tumelty in the wall in the box to give United their fourth penalty in four games. Shay McCartan stepped up again, and just like the last three spot kicks, he calmly dispatched it, sending Ben Nicholl the wrong way.

Three minutes later it was 2-0 as United looked like they could pull away into the sunset. Ross Redman's free kick from wide left somehow missed everybody in the crowded box and fell to Ryan Waide who sweetly caught the ball at the back post to fire it into the far bottom corner.

Just short of the half hour mark Ballymena should've made it 3-0. Millar had a shot blocked at the back post, but straight after his header across goal fell to Waide after a scramble, but in the heart of the goal he mishit it over. In the middle of the scramble Mark Johnston took a heavy hit and had to go off with a nasty looking injury, with his replacement Dylan Smiley only lasting seven minutes himself before going off.

Ballymena will have expected the police to tire in the second half after such a long break without competitive action, and it was the case as United ran riot in terms of second half chances. Before the hour mark Ballymena could've had six, but they were kept at bay by an outstanding Nicholl in the PSNI goal. In the opening minute Millar stung Nicholl's gloves with a long range half volley, with McCartan somehow putting the rebound wide at close range.

Then, after Waide had let a good chance pass him by, Nicholl pulled off a string of top drawer saves to deny Paul McElroy once and Waide twice, with the second stop from Waide a stunner.

Eventually Ballymena did find a way past Nicholl again to make it three and put the game to bed. After the 'keeper had denied McCartan with another fine save, from the corner McGrory's in-swinging ball was met by Kofi Balmer who arrived right on cue to meet the ball and head home.

The Braidmen thought they had a second penalty on sixty-five minutes when Waide went down under Andrew Ferguson's challenge, but despite the linesman flagging for a penalty, the referee had other ideas.

It would be 4-0 less than a minute later with an identical goal to the third. On a split screen it would be hard to tell the difference as again McGrory's corner from the left was met on the same spot by Kofi Balmer to head home his second. Come the final fifteen minutes it was all the Sky Blues and more chances came and went as Waide missed a chance begging to be finished after good feet from sub Joe McCready, before fellow sub Ryan Harpur hit the crossbar with a header.

With five minutes left United did bring up five as Joe McCready added his name to the score-sheet. A simply stunning through ball from McCartan deep inside his own half found Waide, who played in McCready, and he cruised in on goal before easily slotting home.

Another super Nicholl save kept McGrory out in added time after a tidy team move, but for United it's nine goals in two Irish Cup games, as they progress to the quarter-finals, despite a spirited PSNI showing, and set up a date with Dergview at home on Tuesday night.