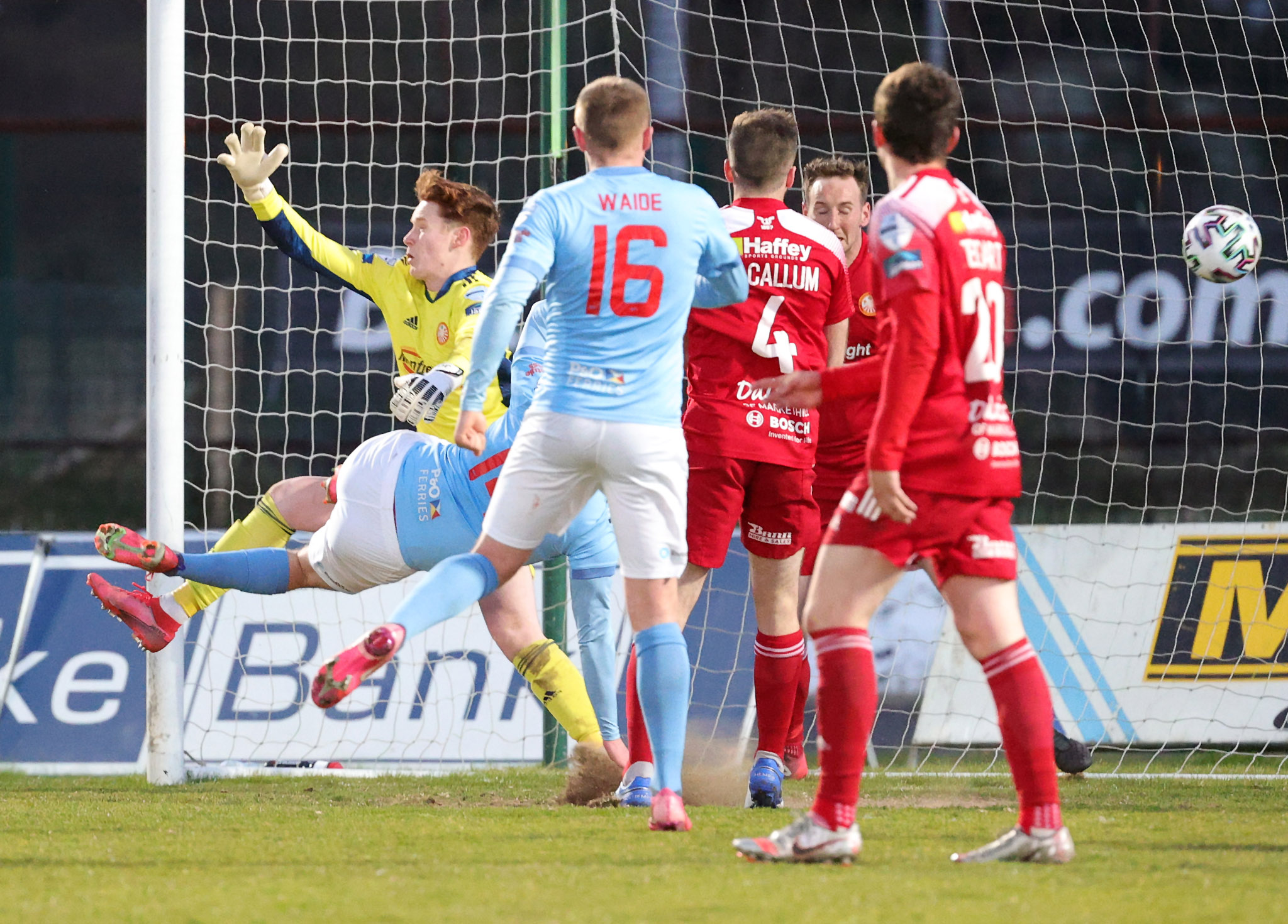 Ballymena United eased into the second round of the Sadler's Peaky Blinder Irish Cup with a 4-1 victory over Portadown at the Showgrounds in Tuesday night's first round encounter.

After Andy McGrory, Kofi Balmer and Leroy Millar all returned from long injury lay off's to make the bench at the weekend, all three started this evening, with Ryan Waide's inclusion the last of four changes from the derby day defeat.

In extremely blustery conditions, United had the ideal start to their quest for a first Irish Cup in thirty-two years as they moved in front within five minutes of the start. Paul Finnegan's back-pass to his goalkeeper was short and intercepted by Paul McElroy, who rounded the 'keeper and slotted home into the empty goal to give United the early advantage.

The Ports weren't far away from an equaliser from their first chance on nine minutes when George Tipton picked out Lee Bonis for a free header, but he couldn't hit the target. Shortly afterwards a cross from Greg Hall looked to be going out before it skimmed the woodwork, but in an open start to proceedings Ballymena almost went 2-0 ahead, only for Jacob Carney to save McElroy's bicycle kick.

In an evenly matched and tightly contested half, the Braidmen had a great chance to double their lead when Ryan Waide was played through between the lines, but as he rounded Carney his touch took the ball away from him and the chance was gone.

The first half chances seemed to have been mostly used up early on, as a really scrappy cup tie broke out until five minutes from the break when Portadown levelled in style in a frantic few minutes. One long ball over the top took United's defence out of it, but with a lot to do from a bit of an angle, Lee Bonis hit a delightful half volley that sneaked in off the far post.

The game was level for less than two minutes as Ballymena quickly regained the lead with a fantastic goal of their own through Waide. With a bit of space on the left hand side of the box following a knock down, and with Carney off his line, Ryan Waide lobbed the ball over the 'keeper and into the back of the net for 2-1.

Portadown still had time in the half to try and level and when Bonis evaded the offside trap his powerful strike was stopped by a top drawer, one handed Jordan Williamson save. From the resulting corner, Ben Tilney used the wind to direct the ball goalwards, but it came back of the crossbar, as an all-round eventful half was just shaded by the Sky Blues.

The second half took a while to get going, with the first chance for Josh Kelly easily saved, after he'd been found by a tidy McElroy cross. Twelve minutes into the half United had clear daylight for the first time as McElroy's second of the evening made it 3-1.

Ross Redman's ball into the box was taken down by Shay McCartan who went down, but as play continued Paul McElroy smashed home from close range in amongst a crowd of bodies.

The home side's third seemed to take the sting out of the game as Portadown struggled to find a way back into the tie, and that struggle became mission impossible as United made it 4-1 from the spot with thirteen minutes left. After McElroy had been nibbled at one or twice in the box, he was finally knocked over by Adam McCallum. It was Shay McCartan's who stepped up to take the spot kick, and despite Carney going the right way, the ball was nestled beautifully into the bottom corner.

As the Sky Blues looked to add some further style to the scoreline Andy McGrory had an effort blocked by Hall, before his second effort went just over. In added time the woodwork took another hit as McCartan's inswinging free kick came back off the post, as did sub Ryan Harpur, but it was a comfortable nights work for United who safely progressed into the last sixteen.