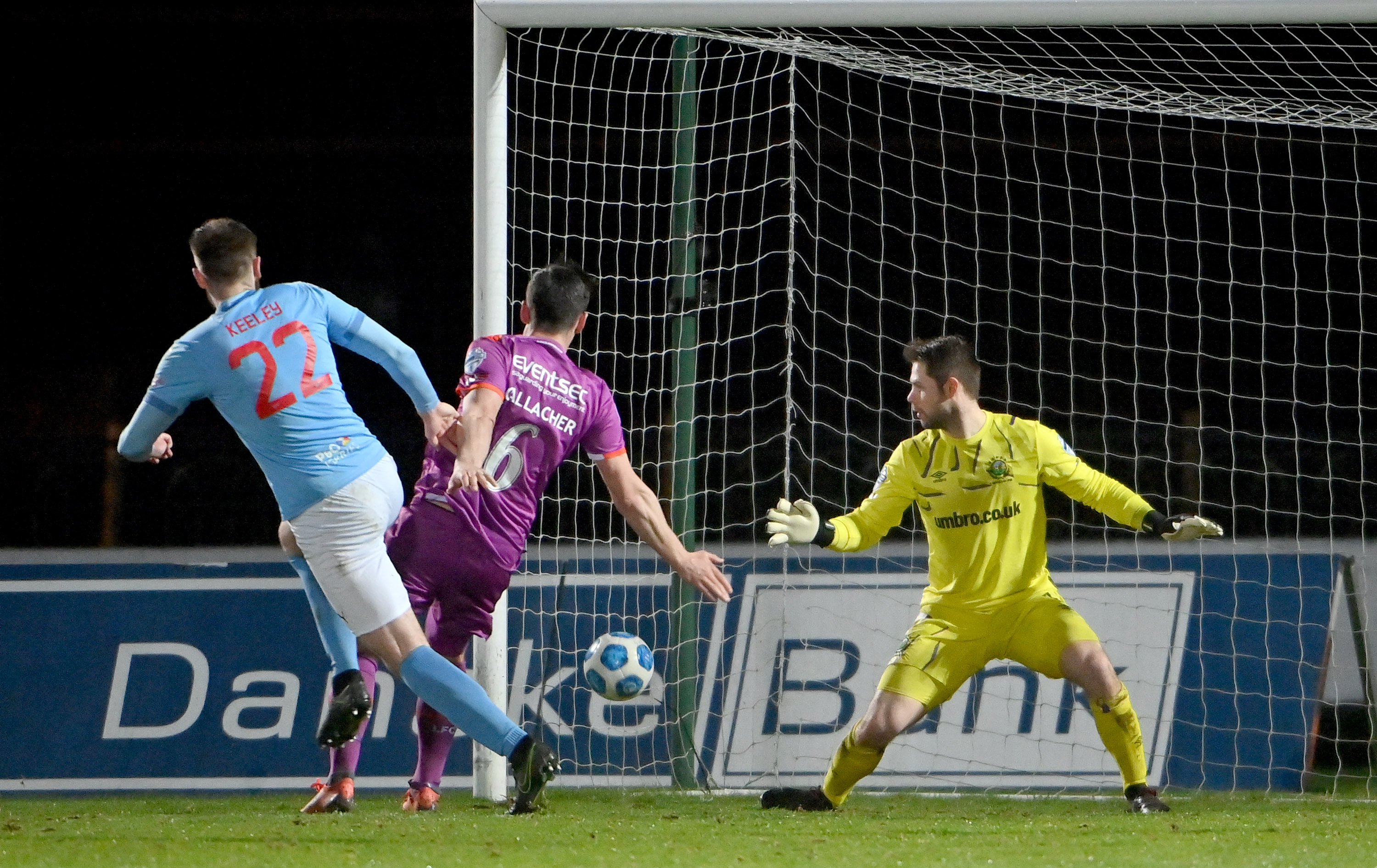 A last minute winner from double scoring Conor Keeley helped Ballymena United to a huge 2-1 win over champions Linfield at the Showgrounds on Tuesday evening.

After two visits to Warrenpoint in five days, international call ups and injuries meant United were forced into five changes for their return to Warden Street. Among the changes Ross Glendinning returned to take the gloves against his former side, while Owen McKeown made his first home league start.

The early stages of the game were mainly dictated by the table topping Blues, but neither 'keeper had any cause for concern early doors in a quiet start. Linfield did manage to put plenty of deliveries into the box, but most, if not all, were diverted away from danger via the head of Conor Keeley. When Linfield did finally turn possession into chances, Jordan Stewart bent an effort narrowly wide from the D, before Joel Cooper cut in from the left and forced Ross Glendinning into a save.

Ballymena were given plenty of chances to try and build an attack, but failed to keep hold of the ball for long enough to really threaten, and they could've went behind when a cross fell to Cameron Palmer at the back post, but in a great position he sliced his effort well wide. Minutes later another Palmer shot deflected perfectly into the path of Kirk Millar who struck on the volley on the edge of the box and it was well hit, but just wide.

In the final five minutes of the half The Sky Blues started to grow into the game and in the final minute of action they had the best chance of the half to go ahead. Joe McCready got in behind but after dragging Chris Johns off his line he opted to pass for Josh Kelly instead. Kelly arrived on the run to strike just inside the box, but he was thwarted by Mark Haughey who cleared the ball off the line. The Braidmen still had time for another chance before the break, as Ross Redman's free kick was met by McCready, who forced a good, low save out of Johns, as the sides went into half-time with nothing to split them.

The second half produced a far more open encounter and it was United who started the half the better, though carving out chances was easier said than done. At the other end both Cooper and Andy Waterworth looked likely to get in on goal, only for some high quality defensive work on both occasions from a flawless Jim Ervin. Around the hour mark the open first ten minutes seemed to have ended as Linfield began to embark on a sustained spell of heavy pressure on the United back line. A cross-cum shot from Cooper was the visitors best chance, and it looked to be creeping in, only for a fine Glendinning save.

With the pressure mounting United were glad to gain a moment to breathe with a free kick deep in the Linfield half, and the hosts were able to turn that free kick into the game's first goal. Tony Kane's ball in was into the perfect area in the box for Conor Keeley, who was on hand to neatly send the ball home with a tidy touch to grab his first goal in sky blue.

The lead would only last seven minutes as the league leaders quickly levelled. Substitute Navid Nasseri was clipped in the box by McKeown, and seconds after referee Shane Andrews seemed to have no interest in the penalty claims, he eventually decided on a delayed spot kick. Andrew Waterworth took the penalty and squeezed the ball in low past Glendinning to equalise.

With an open game once again in full flow, Ballymena had a massive penalty claim of their own five minutes later. The ball seemed to quite clearly strike a raised Linfield hand in the box, but much to a lot of disbelief in the United ranks, no foul was awarded. Moments after the claims Shay McCartan struck over from a good position. A minute later McCartan had another chance and it was a huge one. Kane did exceptionally well to flick a header on and put McCartan racing through on goal, but with only Johns to beat it didn't appear the greatest of strikes and Johns was able to save with his legs.

With a penalty decision not going their way and a big chance passing them by, Ballymena could've retreated back for a tough final five minutes, but they did the opposite. Kelly brought the hosts forward on the counter before feeding Paul McElroy who had a shot tipped wide three minutes from time.

Just as two minutes was about to go up for added time, Linfield were reduced to ten men when Cooper saw a straight red for a late lunge and two minutes later, with the last kick of the ball, Ballymena found a dramatic winner. On the second of two corners, Kane, who impressed all evening, turned provider again. This time his fantastic ball into the six yard box was scrambled home by the outstanding Conor Keeley, with the ball just about clambering over the line. It cued Covid compliant celebrations from those in the ground, and gave United a deserved three points in their biggest scalp of the season.