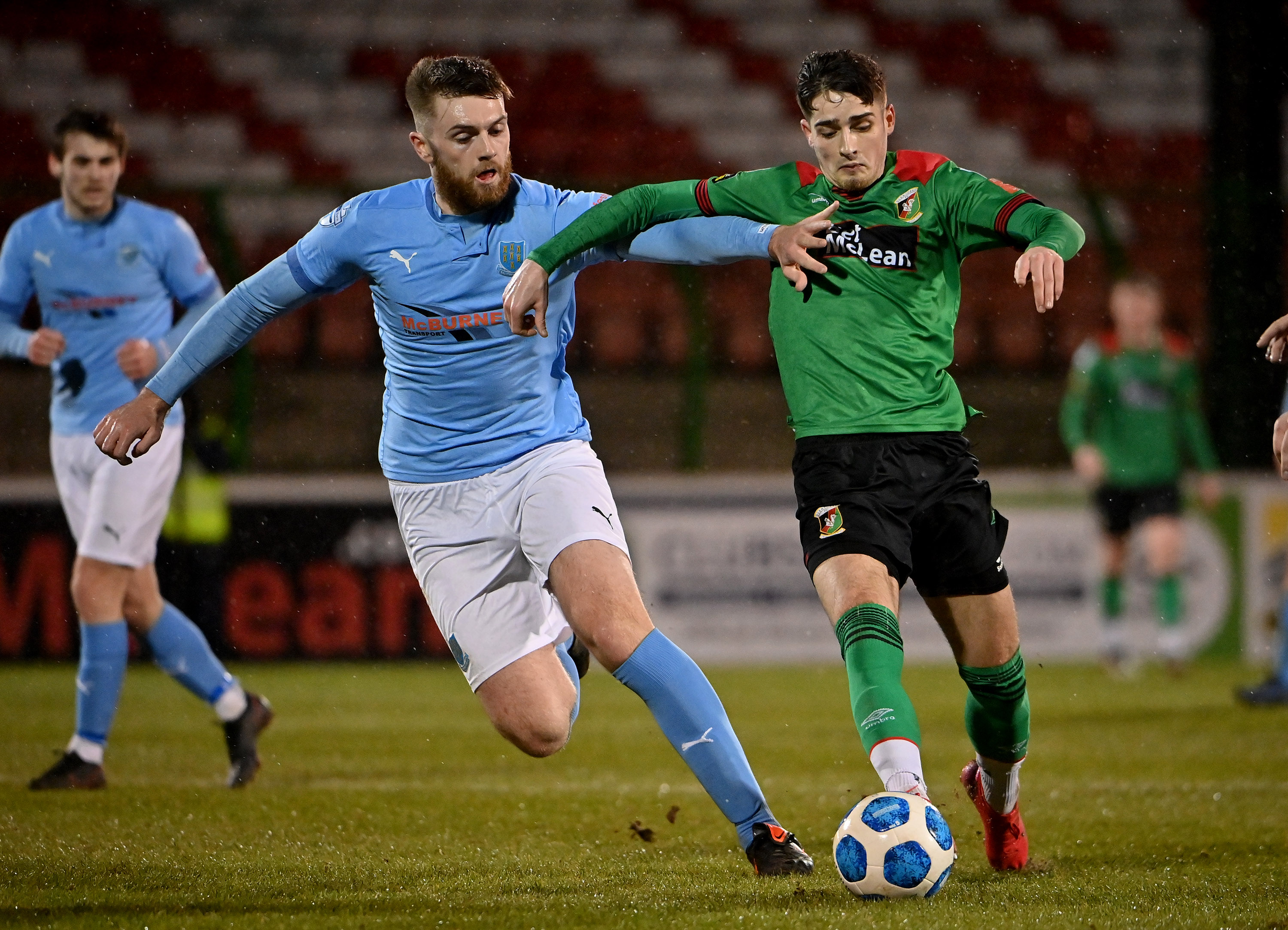 Ballymena United put in one of their performances of the season to defeat Glentoran 2-0 at The Oval on Tuesday evening.

Ballymena mixed things up for the trip to East Belfast with five changes to the starting XI, including starts for Jim Ervin and James Knowles against his former club.

In a damp and blustery capital, the much changed United side started well against their full time opponents. Glentoran threatened as expected and Jay Donnelly struck high and wide early on, but a good deal of the play was in the Glens' half. Ross Redman caused his old team a problem with a free kick onto the penalty spot which was pin-balled about before being cleared.

After the Braidmen's bright opening twenty minutes, Glentoran took a foothold in the game and cranked up the pressure on United, who stood firm. Conor McMenamin called Jordan Williamson into his first piece of action with a well hit strike from 25 yards, but Williamson was equal to it with a fine diving save to tip it over. Not long after a McMenamin cross deflected off Trai Hume and had Williamson scrambling, with the ball looping just wide.

Williamson was alert to deny McMenamin again with his feet at his near post, but as Ballymena saw out a difficult ten minutes, they came again themselves and took the lead in style. After the hosts had just about avoided an own goal by putting the ball narrowly over the crossbar, Tony Kane took the resulting corner which went through everyone, including the Glens 'keeper to go directly in at the far post.

It prompted a strong final ten minutes in the half for David Jeffrey's side who were playing with the strengthening wind. Knowles tried his luck from a long way out, with his well struck effort almost creeping in. In added time Conor Keeley headed a corner back across goal, with Dayle Coleing just about stopping the ball deflecting into the net, as a fantastic opening forty-five minutes from the Sky Blues saw them lead at the break.

With Glentoran in a rich vein of winning form, United may have expected a second half onslaught, but it didn't come as Ballymena continued to impress all over the park. Joe McCready playing one of the starring roles and tested Coleing early on in the half, but it was easily saved.

Glentoran were no doubt seeing more of the ball, but Ballymena's outstanding back line prevented many chances and on sixty two minutes it was Ballymena who grabbed a second. Again it came from a Kane corner, but this time it was Kane's cross which was flicked on at the near post, before Ross Redman popped up to bundle the ball home from close range.

Glentoran could've and maybe should've halved the deficit when Ruaidhri Donnelly picked out McMenamin in the six yard box, but he could only head wide. With Glens' chances still at a premium, the away side could've settled it when sub Jude Winchester played in Paul McElroy who raced in on goal, but under pressure from two Glenmen he struck his shot millimetres wide.

Glentoran had half chances late on with Ciaran O'Connor striking wide, Robbie McDaid doing similar and then Dale Gorman firing straight at Williamson, but in the end Ballymena comfortably saw the game out for a huge three points and a massive all round performance for ninety minutes.