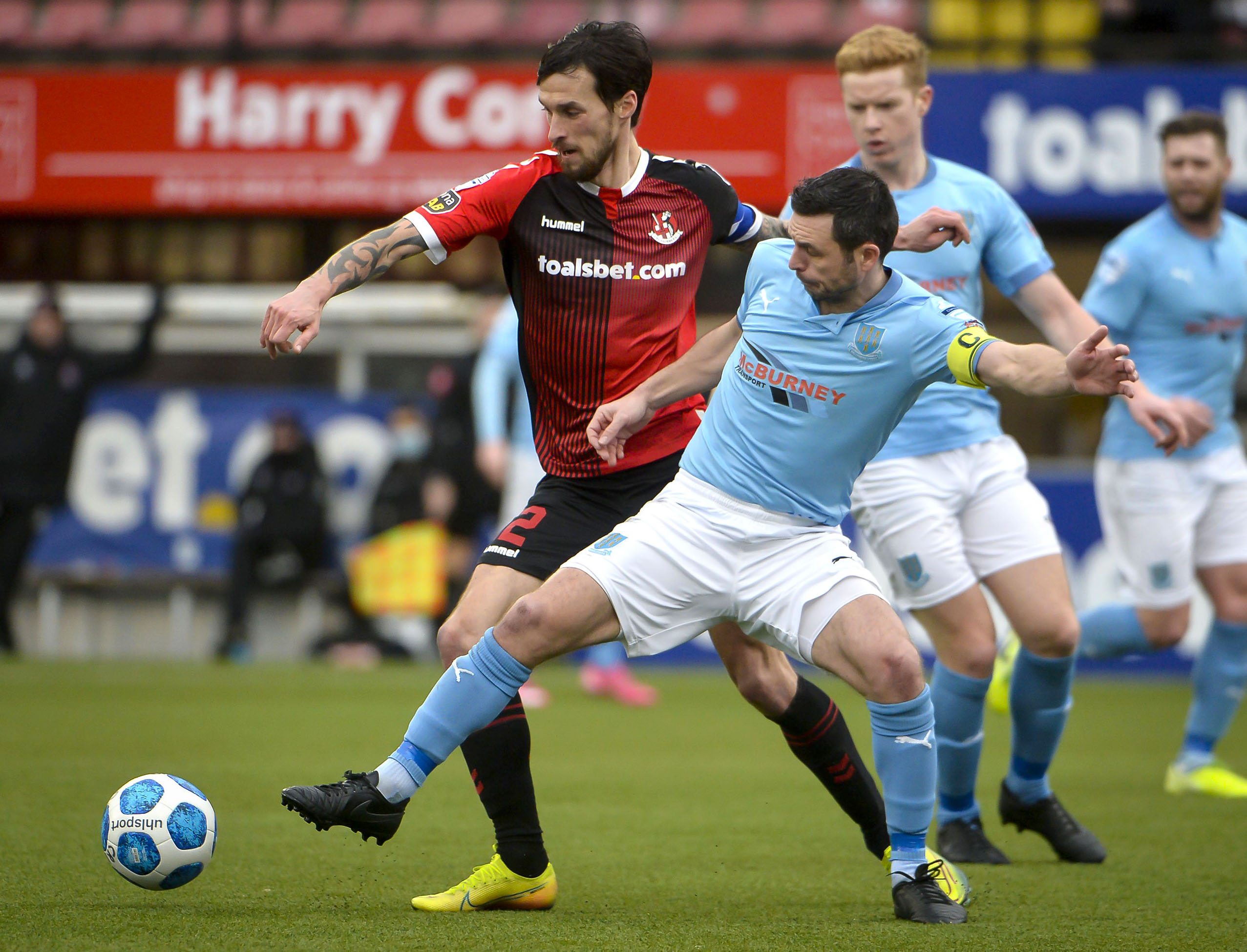 Ballymena United's league struggles continued as they surrendered a lead to lose 2-1 to Crusaders at Seaview this afternoon.

There were a number of changes to the United side that lost out to Coleraine during the week, as Ross Glendinning replaced the suspended Jordan Williamson, while James Knowles, Ryan Waide and Joe McCready all came in to start as well.

In extremely strong winds in the capital, both sides unsurprisingly struggled to settle in the conditions, however United did have advantage of the wind. And that advantage almost paid dividends when the wind got Daniel Larmour in a spot of bother as he tried to shield the ball through to his goalkeeper, but Jonny Tuffey was out to smoother Paul McElroy who was almost in.

On 13 minutes Ryan Waide went close when his cross from the right ended up goal bound, coming off the base of the near post before being cleared, but a minute later The Sky Blues went ahead. Knowles had the time to whip a cross into the host's box and a mixture of wind and slack defending allowed the ball to land at the feet of Joe McCready whose side footed finish from close range looped into the back of the net.

The Braidmen will have felt the goal was deserved with the away side pressing high and forcing The Crues into mistakes. Crusaders themselves had done little to bother Glendinning, with a long range effort from Robbie Weir easily gathered by the returning shot-stopper. After a fairly eventful opening 20 minutes, there was little to go on from then till the end of the half.

Surely looking to use the wind to their advantage, Ballymena still posed a good threat going forward, and were enjoying as much possession as their opponents, but neither could fashion a chance at goal.

When a chance did come, it fell Crusaders' way and it finished with the ball in United's goal as the home side, rather fortuitously, leveled. Initially it looked like Paul Heatley would score, only for some quality defending from Trai Hume to deny him.

However, Crusaders kept possession and eventually Weir teed up Jamie McGonigle on the edge of box, and what was surely a cross from Jamie McGonigle caught the wind and looped over Glendinning and in, to take the sides level into half time.

If the first half had ended badly for the Braidmen, the second half started equally as bad as Crusaders moved ahead inside two minutes of the restart. Billy Joe Burns' ball into the box was helped on by the boot of Jim Ervin and landed straight to the feet of Paul Heatley who, with his back to goal, very neatly hooked the ball over himself, Glendinning and Conor Keeley on the line to put Crusaders in front.

Following on from the quick fire double either side of the break, Crusaders took firm control of the game and began to dominate play, as Ballymena struggled to get a real hold of the ball. However, despite having most of the ball, the North Belfast side weren't doing much to trouble Glendinning. When Glendinning was called into action, it was to come well outside his box to try and claim the ball, with it eventually falling to Heatley who tried his luck from just inside the Ballymena half, and the ball dropped just wide from goal.

The Braidmen's first chance of the half didn't come until the 68th minute, and it was from an unlikely source from open play. Good work from Josh Kelly allowed Hume to deliver an inviting cross into the box, where unexpectedly Keeley was waiting, before heading just wide. After the chance Ballymena brightened up and began to pose more of a threat in the Crusaders half. A change also allowed Sean Graham to come on for his Sky Blue debut, as he replaced Knowles.

Not long after his first chance, Keeley caused more problems for the hosts as he went close again, this time from a corner, as Ross Redman's ball found Keeley's head, but it was nodded off the line by Chris Hegarty.

Late on Heatley looked like he would go clear on two occasions to seal the deal for The Crues, but he was denied both times by outstanding defending from Hume, who impressed all afternoon, but it wasn't enough for United who went on to suffer a fourth straight defeat.