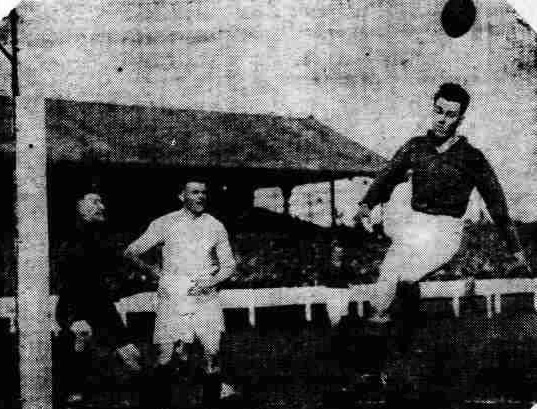 Ballymena contested the final of the Irish Cup last Saturday for the second year in succession, and taking all things into consideration were distinctly unlucky not to retain the trophy.

IT was anybody's game right up to the closing stages. With only ten minutes to go, and the teams on level terms, everyone was fully prepared for a reply, but misfortune befell Ballymena when Kilpatrick was carried off with a nasty head injury. It was shortly after this that Bambrick scored the winning goal.

The final aroused the greatest enthusiasm in Northern Ireland football circles, and no surprise was occasioned that the crowd, estimated at over 20,000 was a record one. About 1,500 people travelled from Ballymena and district. The gate receipts, amounting to £1,597, constituted an Irish Cup record.

The match compelled a steady interest from start to finish. With the wind in their favour in the first half Linfield scored twice. The first goal should never have occurred, and as for the second it was definitely off-side; all the newspapers both English and Irish, agree on this point. Two minutes before the interval Davy Reid hooked the ball into the net for Ballymena's first goal.

With the wind advantage Ballymena drew level early in the second half per Shiels. So well did they shape after this, and so consistent was their attack, that it only seemed a matter of time until they would take the lead, and once they got that the issue seemed certain.

In the first twenty minutes of this half Linfield had only about two good runs, and there was general surprise when Bambrick capped the second one with a goal, mainly owing to slack defensive work. Nothing daunted, Ballymena tried harder than ever, and again Shiels levelled the scores. The absence of Kilpatrick for the last ten minutes of the game handicapped Ballymena considerably. With only six minutes to go Bambrick scored a beauty with not an opponent near him. And so the Cup was won and lost.

The crowd began to arrive at Celtic Park early. An hour before the kick-off quite a large crowd had assembled and people kept simply streaming through the turnstiles. Accommodation in the grand stand, where most of the seats had been reserved, and the standing room immediately in front, was taxed to its utmost capacity, the crowd being packed together like sardines in a tin.

The unreserved side was was one solid block of humanity. Community singing, arranged by the 'Daily Express'. was indulged in under the direction of Mr. Thomas P. Radcliffe, London (conductor at the English Cup Final) and led by the R.U.C. Band. Shortly before the teams entered the field a sharp shower swept across the ground, but it was of short duration, and fortunately the match was favoured with dry overhead conditions.

Linfield were first to appear, and they received a rousing cheer, and then Ballymena emerged from the dressing room at the other end of the stand, and they too, were accorded a hearty reception. After the customary presentation of mascots. the Press photographers got busy, and then the decks were cleared for action.

Linfield's first slice of luck came with Sloan winning the toss. With the breeze in their favour they raced off for goal at once and Gough handled in the first minute. Then they forced a couple of corners, and from the second Shiels shot off on his own, but was fouled. Reid took the resultant 'free', but a nice passing bout was spoiled when Murphy was unable to keep the ball in play.

Then Reid upset McCracken unfairly, and Jones placed the 'free' well for McCaw to dash in and head past. The Ballymena end continued to be at the scene of the action. Gough pushed out a shot and Gilmore cleared, and in another minute Linfield forced a further corner, but 'hands' spoiled their chances.

A fast run by Kilpatrick up the right wing found the Ballymena forwards pounding up the field, but the winger's pass went behind. In a twinkling Gough was again in action, and Bambrick forced a corner, but Gilmore headed clear, and Shiels transferred play out of the danger zone. By this time Ballymena had found their feet and gradually they settled down to their work in good style. A nice movement on the left enabled Murphy to lift the ball well into centre, and Cassidy just failed to head in. Gilmore and Howard cooperated in another movement, which ended in Murphy forcing a corner, from which Gilmore headed past.

A 'free' to Linfield was taken by Brown, who shot straight for goal, but Gough was ready. Linfield increased their efforts, but good work by Reid and the defence prevented a score. Cassidy initiated a clever movement in which he drew the defence and then placed the ball right in front of goal, where Howard shot, but Lawson saved. Afterwards when Murphy had possession Shiels nipped in and, taking the ball himself, sent it in hard across goal, but no Ballymena forward was up to take advantage of the opening.

Bassnett was injured and went to the line for a few minutes for repairs. In a Linfield raid McNinch miskicked and the force of the wind sent the ball right across the field, so that Howard was obliged to concede a corner to save the situation. The crowd got a real thrill when McCaw flashed in a great shot which Gough brought down, but failed to hold, and Grice pounced on the ball, but his effort went wide.

It was now Ballymena's turn to attack, and from Cassidy's pass Kilpatrick drove the ball into goal, but Lawson punched out. Cassidy headed back again, but once more Lawson came to the rescue. At the end of twenty-six minutes Linfield drew first blood. Jones lobbed the ball well up, and with both McNinch and Gough in the vicinity Joe Bambrick, with his back to the goal, somehow managed to get the ball into the net.

It seemed all due to a misunderstanding between Gough and McNinch, and should never have occurred. This reverse put new life into Ballymena, and Cassidy brought Lawson to his knees with a magnificent drive. There was more sparkle in the play now, thrill following upon thrill. McCracken fired in a pile-driver, and Gough was applauded for a splendid save. Sloan went away limping after a tackle by Bassnett, and the referee had something to say to the offending player.

At the moment Linfield were on top, and it took all the combined efforts of the Ballymena halves and backs to stem the tide. Then came Linfield's second goal, the one which the Press unanimously rules off-side. McCaw dropped in a centre and Joe Bambrick steered the ball into the net. It was a glaring off-side goal, and Gough ran out to remonstrate with the referee, but Mr. Josephs was adament.

However, consolation soon came to Ballymena. Following a clever attack by Cassidy and Murphy, which they all but managed to cap with a goal, the Ballymena front line came away again, to be stopped by Watson fouling. Kilpatrick took the 'free' and placed the ball just in front of goal, where David Reid hooked it into the net.

Ballymena resumed in fine style, Gilmore sending Kilpatrick off on the wing, and the latter, after a good run, turned the ball in well, but it was past before Shiels got his head to it. Further pressure by the Light Blues made the Linfield defence look alert, but no tangible result was forthcoming, mainly owing to Ballymena's forwards crowding together.

Cassidy, who was the means of starting many promising movements, sent out to Murphy, whose subsequent shot Lawson found some difficulty in saving, having to concede a corner. From another corner Cassidy caught the crossbar, with Lawson well beaten. Still another corner fell to Ballymena, who were now doing all the pressing, and Jamie Shiels headed the ball into the net for the equaliser.

Ballymena's supporters became optimistic at this stage, and rightly so, for everything pointed to them taking the lead. They had the wind behind them and were attacking consistently and methodically, and it only seemed a matter of time before another goal would be registered. From a 'free' taken by Kilpatrick the Linfield goal had another escape when Cassidy grazed the bar. Then Gilmore tested Lawson, and later Shiels had a pot at goal, but all to no avail.

Play was more strenuous than ever now, with Ballymena still foremost in the picture. There was some surprise when the referee failed to give a 'free' when Watson brought Shiels down, rather unfairly it seemed. Instead the referee scrambled the ball about twenty yards away from the spot where Shiels lay. More pressure by Ballymena brought another corner, but the defence held out.

With seventeen minutes of this half gone Linfield took the lead again, Joe Bambrick scoring a snap goal totally against the run of play. In the play leading up to the goal Gough had cleared his charge, but the backs failed to get the ball away and Jones placed for Bambrick to beat Gough. It was a tremendous shock to Ballymena.

A 'free' to Linfield just outside the penalty area gave Bambrick another opportunity, but Gough saved the header. Then Reid took a Ballymena 'free' but he failed to allow for the wind, so that the ball went careering past at a terrific speed.

Ballymena went all out for the equaliser, which came when this half was twenty-five minutes old Davy Reid lifted the ball well up the field, and it dropped just in front of goal for Jamie Shiels to drive it home. Play veered quickly from end to end for a period, and once Howard cleared from the Ballymena goal line. At the opposite end Cassidy, Gilmore and Murphy had shots in turn, only to miss narrowly.

Just when everything seemed to point to a drawn game Watson and Kilpatrick collided violently, and the Ballymena player was carried off, blood streaming from a nasty cut in the forehead. The absence of Kilpatrick was undoubtedly a determining factor in the subsequent play for when the ball went to the right wing Sloan had an easy passage, as he had no competition.

Still, Ballymena played so effectively that they forced a corner, from which Bassnett sent over. Six minutes from the end Houston swung across a lovely centre, and Joe Bambrick wasted no time in lodging the ball safely in the net. The pace never slackened right up to the end.