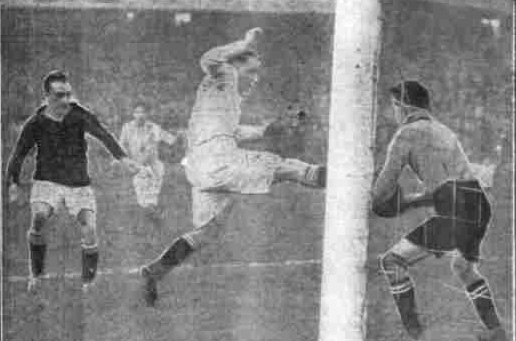 Before a crowd of international proportions at Windsor Park, Belfast, on Boxing Day, Ballymena inflicted on Linfield the severest defeat they have sustained for many a long day.

The great crowd watched Ballymena's football with undisguised delight and even the most rabid Linfield supporter had to acknowledge that their favourites were badly outclassed not only in the matter of goals, but as far as football craft was concerned also.

Gough again appeared in the Ballymena goal, and Nelson displaced McNinch at right-back. The size of the crowd which saw the match may be imagined when we considered the 'gate' receipts amounted to close on £540.

Ballymena took command of the game right from the start, and at the end of eleven minutes had opened the score per James McCambridge after a fine forward run by Shiels.

The Linfield end of the field continued to be the scene of action, the Ballymena halves and forwards working like a well-balanced machine, so that no surprise was occasioned at the end of eighteen minutes when Shiels crossed the ball out to Murphy, and the latter returned in for Joe Cassidy to score the second.

Ballymena were playing extraordinary football now, the tactics of the forwards, with Cassidy as the perfect schemer, being absolutely brilliant. The third goal came five minutes after the second, when Howard put forward to Murphy, who placed to an inch for James McCambridge to steady himself and beat Rainey all the way.

Up to this time the Linfield forwards had not had a solitary try for goal, so well were they by the Ballymena halves and backs. Indeed, it was twenty-four minutes from the start before they essayed a try, McCaw lobbing a long shot over the bar. Just after this Linfield received a 'free' just outside the penalty area, and Tommy Frame scored with a beautiful kick. They came within an ace of scoring a short time afterwards, but Gough ran out and conceded a corner.

Play swung to the other end again, where fine work by McCambridge and Murphy ended in the latter sending narrowly over the bar. These two players were again to the fore in the next attack, and when McCambridge's shot had been blocked Joe Cassidy turned in a dandy which found the net for Ballymena's fourth goal.

Following a corner to Linfield, from which Dalrymple cleared, Cassidy led the Ballymena forwards away on another race and placed neatly for Kilpatrick to centre to James McCambridge, who trapped the ball, steadied himself and netted Ballymena's fifth.

A short-lived attack by Linfield on the resumption was followed by the Ballymena forwards, led by Shiels, racing for goal. Shiels passed out to Kilpatrick, who made a fine return, and Murphy lifted the ball over the bar. Again the Light Blues made excellent progress, but just at the critical moment Frame eased the pressure. Then when the Linfield forwards were well away Bambrick ran in after the ball, but Gough was too quick for him.

Howard opened up the way for Shiels to have a shot, which Rainey saved. Fortunately for Linfield a great drive for goal by Cassidy was blocked by the ball accidently bouncing off an opponent's back for a corner. Then Murphy missed with an attempt with the head from close in, and afterwards McCambridge forced another corner.

Linfield were being completely overrun by a line of forwards which made them look like novices. Joe Cassidy, who was playing sparkling football, was almost through on his own when he was brought down unfairly. However, he had the pleasure of scoring Ballymena's sixth goal following the resultant 'free' after good play by McCambridge and Murphy.

At long last the Linfield front line got moving again, but their attack ended feebly. When the ball had been bustled away from a corner at the Ballymena end, Shiels raced away on his own down the centre of the field. When tackled by Watson he crossed the ball out to Kilpatrick, who placed it neatly in front of goal, where Jamie Shiels beat a trio of opponents and scored Ballymena's seventh.

With such a fine lead Ballymena were evidentially satisfied, and thereafter they contented themselves with playing largely a defensive game, a policy which brought them no good results, for before the finish Linfield scored three more goals. William McCreery was the first to score, with a shot which Gough should have saved without much trouble.

Linfield's third goal came through a misunderstanding on McDiarmid's part, for when he thought the ball was going over the line Ferguson lobbed it into the centre, for Joe Bambrick to head past Gough. In the closing stages Nelson was injured and had to retire to the line for treatment, but he soon resumed play.

With the last kick of the game Joe Bambrick scored Linfield's fourth goal. The ball was not recentred, and in the excitement the spectators left the ground not knowing whether the whistle had sounded before the ball had reached the net. However, it did not matter for Ballymena had won by a handsome enough margin.