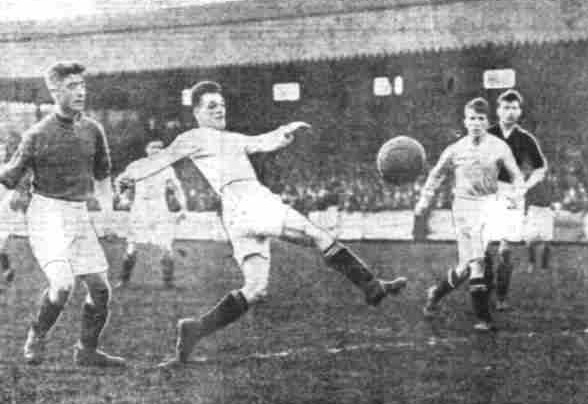 Ballymena's return to form against Bangor was followed by even greater success last Saturday, when they met and defeated Glentoran at the Oval by the odd goal in three.

A big crowd saw the game, the result of which was only determined in the last few minutes, when Girvan sealed the fate of the points by scoring the winning goal for Ballymena with a splendid drive from about forty yards range. The gate receipts amounted to £126.

Winning the toss, Glentoran set Ballymena to play against a strong wind. Despite this adverse factor the Light Blues were first to get to close quarters, Ward being brought into action when Girvan shot after he had run the ball about a foot over the line, a breach which escaped the notice of the referee.

Back they came again, and this time Cassidy had a try, his shot flashing past the outside of an upright. Afterwards Glentoran moved towards the visitors' goal and forced a corner, from which Gough cleared. Gough was in action soon again, and after he had saved and cleared the ball came back out of a ruck of players, and just when a goal seemed certain Reid saved the situation at the expense of a corner.

Ballymena made several short-lived attacks, which fell flat chiefly owing to Girvan's unsteadiness on the right wing. With the breeze at their backs Glentoran made full use of it, slinging the ball out to the wings, but in the face of a stalwart Ballymena defence the efforts of the home forwards failed to fructify.

Roberts sent the ball out to Casey, who made a quick return, and out of the melee which ensued in front of goal ultimately came a corner. In the next attack McKeague was going well until he came the length of McNinch, who put a stop to his career.

Cassidy figured prominently in several Ballymena forward movements, but a vigilant Glentoran defence prevented the attacks developing as they might have. At the opposite end Crooks belted the ball in to the danger zone, and when Gough came running out to clear, Montgomery drove hard over the bar.

Murphy, who was not getting enough to do to keep himself warm, made a great breakaway on the left wing and forced a corner, which still left the score-sheet blank. Good work by Cassidy brought the Ballymena front line well up, but a 'free' against a Glentoran player stopped the attack. After the kick had been taken, Cassidy worked for position to shoot, but he was none too gently shouldered off the ball.

Glentoran paid a short visit to the Ballymena end, but the visitors made ground again, and Allen got his head to a 'free' taken by Reid when the ball was going straight for the net. Activity on the Ballymena left brought McCambridge and Murphy into the limelight, McCambridge placing neatly for Murphy to beat his man and shoot the ball over to Cassidy, who placed it in Wards's arms.

Roberts had a glorious chance in the next few minutes to open the scoring when he led right up to goal but shot erratically from about a yard from the post. A corner to Glentoran gave them another opportunity, but the defence prevailed.

A sharp raid by Ballymena on the restart saw Cassidy push the ball out to Girvan, who ran it over the line. Both ends were visited in turn. At one end Cassidy lobbed the ball over the bar by inches, and at the other Gough cleared his lines following a corner.

When McCambridge was going strong Firth had to foul him in order to spoil the movement. At he end of two minutes Casey got across a fine centre, and Johnny Geary lodged the ball safely in the net for the opening goal, amidst an outburst of applause.

After this the game assumed a more lively aspect, but unfortunately a certain amount of roughness crept in. In a tussle fr possession Roberts injured Davy Reid so severely about the head that he had to be carried to the line for attention. Bassnett came in to fill the centre half position, but hardly was the ball in motion again when Roberts laid out Bassnett, who was also carried to the line.

With their two out-halves injured on the line, and a goal down, things began to look black for Ballymena, but fortunately, the injured men were soon able to resume play. Then began a great battle royal, with the excitement rising every minute. A chorus of 'Ohs' went up as Cassidy struck the face of the crossbar, and the ball bounced straight down. An inch lower would have made all the difference, as Ward was nowhere within reach of the ball at the time.

At this stage of the game Ballymena were playing excellent football, and for a considerable period kept Glentoran on the defensive. Two corners fell to them in quick succession but both were abortive. Then Ballymena had their efforts rewarded when after a lovely piece of play in which he tricked opponent after opponent McCambridge slipped the ball to John Murphy, who was well placed, and who sent it careering into the net for the equaliser well out of Ward's reach.

Ballymena were easily worth the equaliser, and after this they continued to play with spirit, the neat movements on the Ballymena left evoking to admiration of their supporters. Once more McCambridge led the attack, passing to Cassidy, who pushed the ball onto Girvan, the last-named player returning for McCambridge to head narrowly past.

Then Glentoran woke up again, and a determined attack culminated in three successive corners. They continued to press for a time, and were awarded another corner, but it brought no tangible result. In their next attack they received a 'free' just a foot outside the penalty area. In a melee Crooks was injured and had to receive attention on the line.

In the closing minutes Ballymena attacked more vigorously than ever for the winning goal. On the left McCambridge and Murphy were playing an outstanding game, and each had tries for goal which narrowly missed their objective.

With only three minutes to go William Girvan met the ball on the wing about forty yards out and drove straight for goal, and the ball flashed into the net as Ward, who had run back to his play between the sticks, was just about to steady himself. Nothing of incident occurred in the remaining minutes of the game.