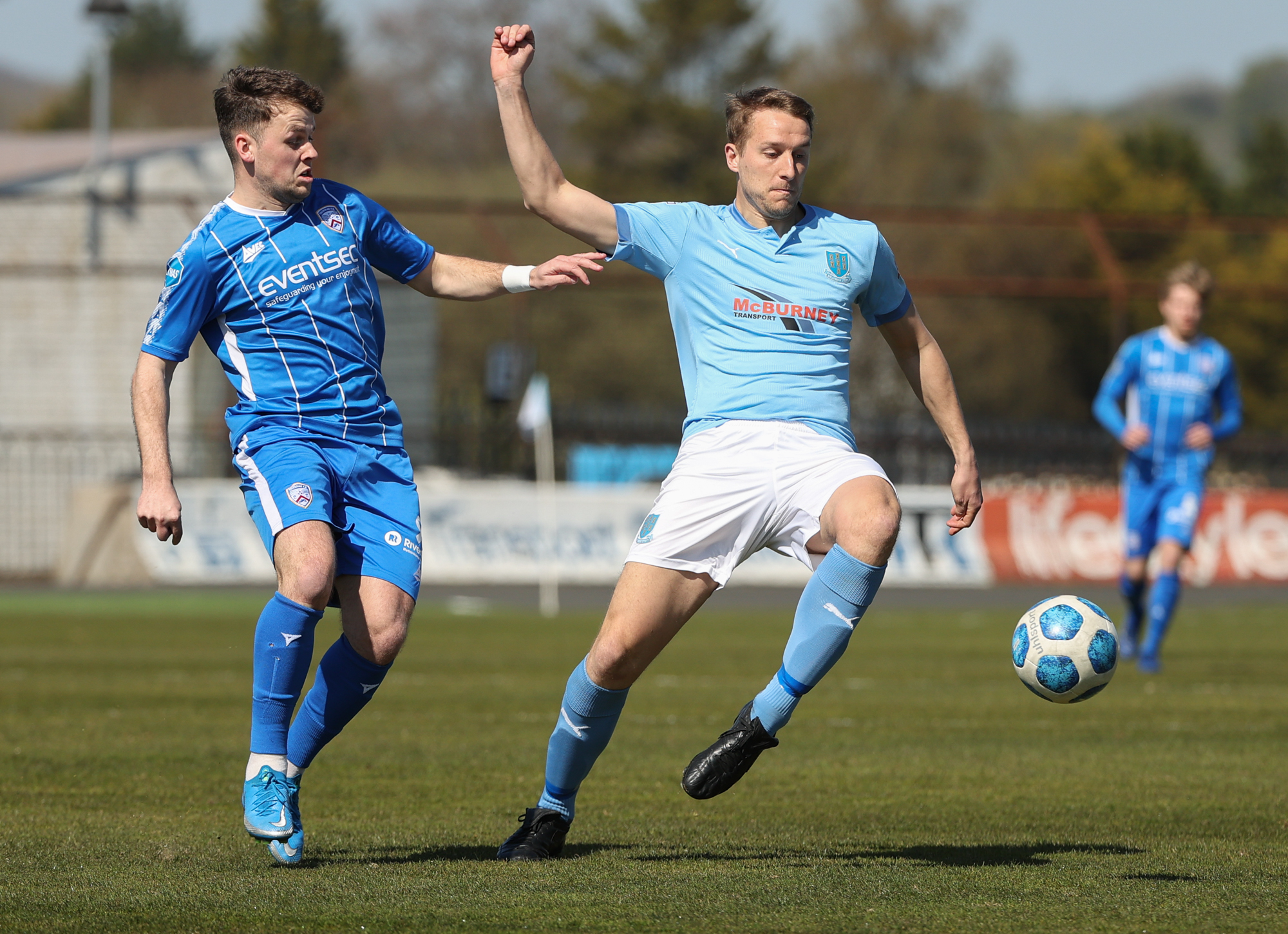 Ballymena United's last pre-split game ended in a 2-1 home defeat at the Showgrounds to Coleraine on the final derby day of the season.

United made three changes from last Saturday's game against league leaders Linfield, including a timely return in goal for Jordan Williamson. In more good news for the Sky Blues, Joe McCready came back from illness, while Leroy Millar, Kofi Balmer and Andy McGrory all made welcome returns to the bench after lengthy lay offs.

Ballymena started well in glorious sunshine on Warden Street and early doors Josh Kelly tested Marty Gallagher on the edge of the box, before Paul McElroy pulled a shot wide from a similar distance.

The Bannsiders grew into the half as it progressed and came close when Eoin Bradley glanced a header wide from an Aaron Traynor cross. Then, on twenty-five minutes former United man Matthew Shevlin got a powerful shot away but was kept out by Williamson, with the rebound coming off Jim Ervin, but thankfully back into the arms of his goalkeeper.

Towards the end of the opening half neither side could really gain an upper hand with a scrappy match up played predominantly in the middle of the park.

The impasse was broken four minutes from the break as the visiting side opened the scoring through Traynor. The full back made his way into the heart of the box and saw his first effort blocked by Owen McKeown, but it fell to Aaron Traynor for a second bite at the cherry and this time he fired past Williamson to give Coleraine the advantage at the break in the derby.

The second half couldn't have got off to a worst start for United as they fell two goals behind inside two minutes. Bradley held the ball up well to find Stephen Lowry and from an acute angle almost on the goal-line he slid the ball under the legs of Williamson and into the far corner.

Looking to get back into the game, David Jeffrey made a triple substitution as Millar and McGrory made their long awaited returns in place of McKeown and Wylie, while McCready replaced Sean Graham. The sub's injected some life into United and Kelly tried his luck again, this time on the half volley from a good twenty-five yards, but his effort flew narrowly wide.

Any hopes Ballymena harbored off getting something from the game almost ended on sixty-four minutes when a free kick from Bradley came off the top off the wall and clattered back into play off the crossbar, before the Braidmen cleared their lines.

With the game opened up more than it had been all day, United went as close as they'd come when Trai Hume glanced a Ross Redman corner wide, before Millar hit a weak shot in a good position straight at Gallagher. At the other end, Coleraine went close again as Josh Carson's low ball across goal missed the boot of Jamie Glackin by the smallest of margins.

On seventy-nine minutes Ballymena pulled one back after an exciting three minutes for Redman ended in the full back finding the back of the net after hitting the woodwork twice. First, an inviting cross from Redman almost went in as it dipped onto the crossbar, and a minute later he struck the post after meeting a cross at the back stick. However, Ross Redman wasn't to be denied and at the third time of asking in as many minutes he powered a header home from a Shay McCartan cross.

As the game entered into an unknown amount of injury time due to no working board, a far cry from any European Super League, United had Coleraine boxed in, but from a number of crosses the Sky Blues were unable to create a big chance to level as Coleraine held on for a second straight derby day win.