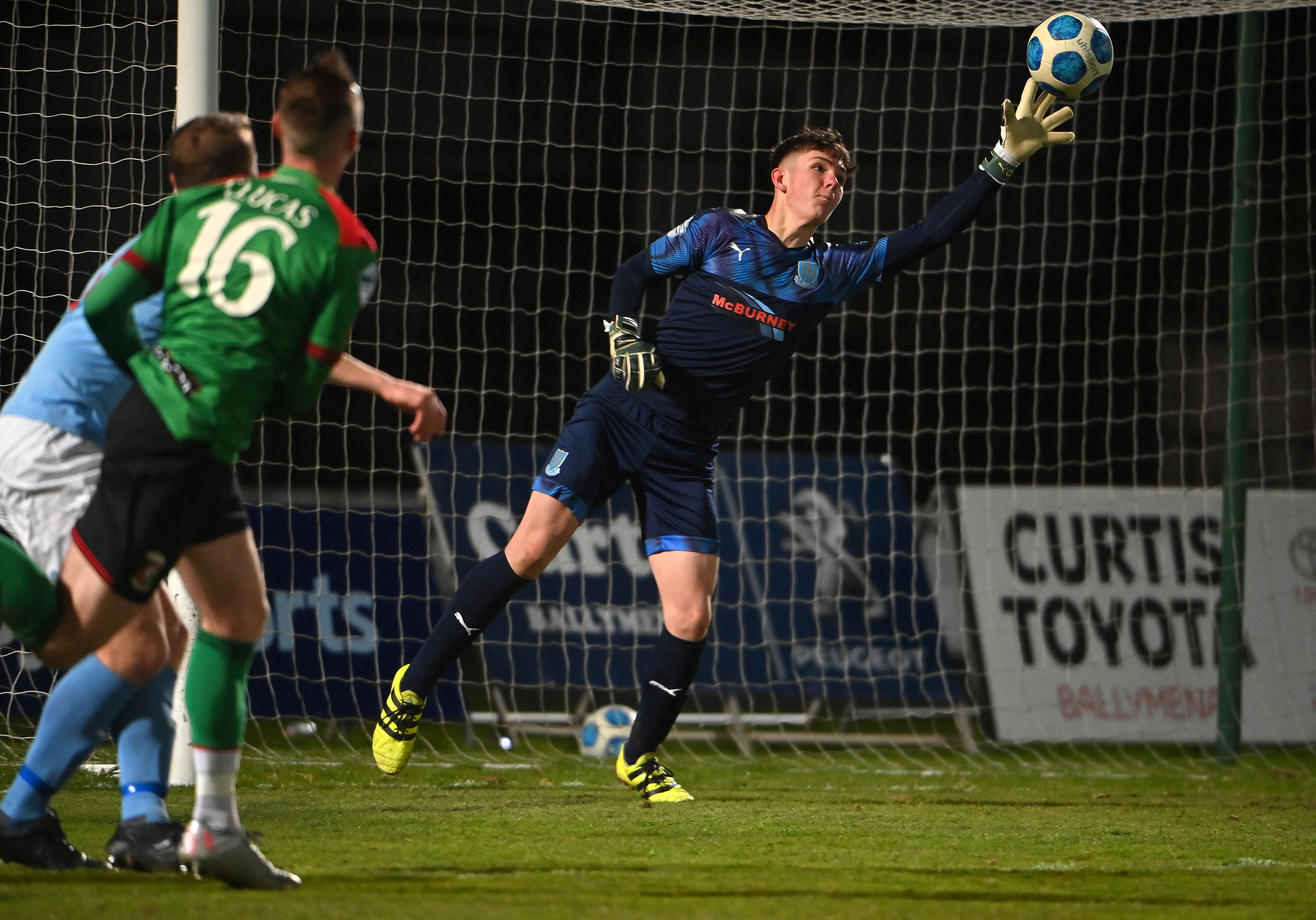 A late Shay McCartan double helped Ballymena United come from two goals down to draw 2-2 with Glentoran at the Showgrounds on Tuesday evening.

An injury ravaged United made five changes to the side that lost on Good Friday to Crusaders, including a debut for goalkeeper Dylan Graham, at the age of just sixteen.

The youngster in goals did well in the opening minutes to come out and catch a cross in a sea of bodies, but on fourteen minutes The Glens broke the deadlock with a helping hand from United's defence and 'keeper. On the goal-line Seanan Clucas eased past an already booked and injured Tony Kane and passed Jim Ervin in the six yard box, before his fairly weak effort went through the legs of Graham from close range.

Shortly afterwards Kane was replaced by Sean Graham, adding to the ever growing injury list on Warden Street.
Ballymena had to do a lot of defending in the first half but had half a chance to level when Ross Redman's free kick fell to Ryan Waide at the back post, but with a host of Glentoran players in front of him he fired over.

Despite it being mostly Glentoran, the East Belfast side weren't doing a great deal to trouble the youthful debutant in Ballymena's goal and in the final twenty minutes of the half only one chance of any real note was registered, but it was one the visitors should've took. Ruaidhri Donnelly's low ball across the box from the left fell to Robbie McDaid who really should've done better as he fired his effort over the crossbar.

Ballymena came into the half a bit more towards its conclusion, but still gave Glentoran no real cause for concern, with the Sky Blues probably satisfied to go into the break just a goal behind.

Ballymena showed a good deal of intent from the start of the second half in a much improved showing. Shay McCartan had been unusually quiet in the first half but a great solo run inside two minutes ended with a shot that could've been finished off at the back post, had any United player been alert enough to the chance.

Not long after Ballymena had a good penalty shout turned down when Paul McElroy went down in the box in the middle of a Glentoran player sandwich, and straight up the other end it could've been 2-0, only for skipper Ervin to head Jay Donnelly's header off the line. With a bit of an end to end feel to the game for a spell of play Ballymena had the next chance when Ben Wylie, a standout player in the second half, did well to find Waide, who cut in but saw his shot saved by Rory Brown.

On sixty-six minutes the Braidmen had Ervin's centre back partner Jonny Addis to thank for a big clearance of his own to keep a McDaid effort out, but on seventy-four minutes another defensive error from United cause another Glentoran goal. Josh Kelly tried to play his way out of danger on the edge of the box, but was quickly dispossessed by Seanan Clucas, who made his way towards goal before bending his shot home for his and Glentoran's second.

Glentoran had created very little in the second half, but many watching on the BBC Sport NI stream would've thought it was game over after Clucas' second. However, Ballymena rallied in style and pulled one back inside four minutes with another stunning goal for McCartan's collection. The forward picked the ball up on the halfway line and charged his way to the edge of the box, where he looked to be fouled. Play continued and the ball eventually fell back to Shay McCartan as he picked himself up off the floor, and he neatly fired a low effort out of the reach of Brown to give Ballymena a glimmer of hope.

The hosts continued to take the game to Glentoran and with five minutes left Graham was brought down in the box by Clucas to give Ballymena the perfect chance to dramatically level as a penalty was awarded. After a couple of misses recently by McElroy from the spot, it was Shay McCartan who took this one, and he sent Brown the wrong way to pull United level.

Glentoran dominated the three minutes added on but a shot that flew well wide from Rhys Marshall was the closest they came due to resolute United defending, as Ballymena saw it out for a fantastic comeback and a vital point.