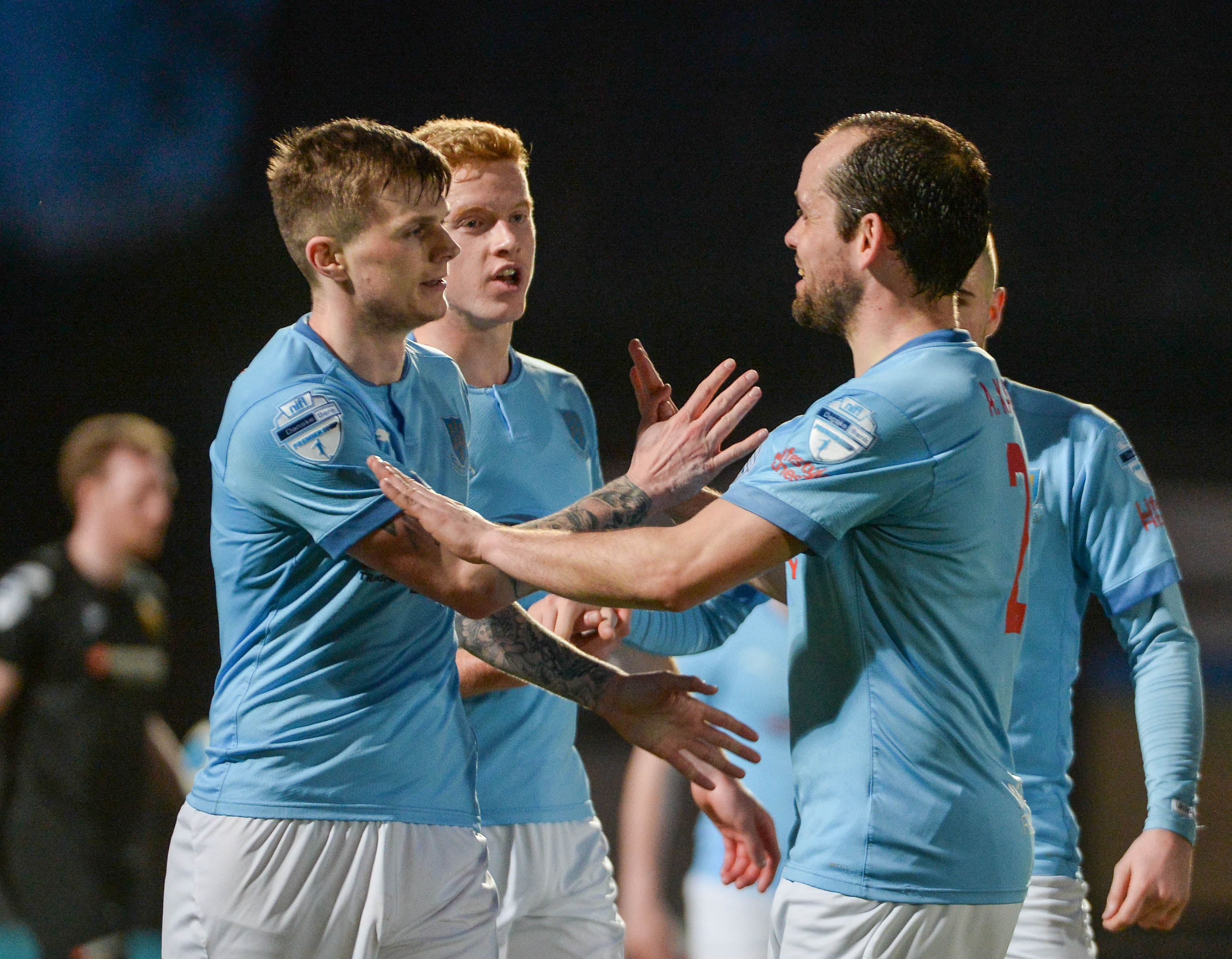 Ballymena United made it ten in a row unbeaten with a very hard fought 2-0 win over Carrick at the Showgrounds on Tuesday night.

For the second game running it was just the one change for United, with the injured Conor Keeley coming out of the side and being replaced by Jonny Addis. The first half at The Showgrounds wasn't always an easy watch, with very little chances and the ball spending less time than usual on the ground.

The first opportunity did come early however, and it fell Carrick's way when Jordan Gibson hit one straight at Ross Glendinning after Lee Chapman had passed up a good chance at the back post just beforehand.

The Braidmen's first chance to work Aaron Hogg came on ten minutes when Ryan Waide, one of United's bright sparks all evening, held the ball up well to find Paul McElroy, and his shot was well hit, but well saved. That would effectively be that in terms of chances for the best part of half an hour as neither side could put together a period of control and any play came nearer the centre circle than either box.

United did have a scare around the half hour mark when Jordan Jenkins went down on the line of the penalty box under pressure from the last man, but after Ross Dunlop seemed to be lifting the whistle to his mouth, no foul was given, much to Carrick's annoyance.

On thirty-six minutes the deadlock was broken out of nowhere and it was perhaps apt that an own goal broke it. McElroy latched onto a good ball through the lines and raced into the box before putting a dangerous ball across the six yard line. His ball was narrowly missed by the outstretched Hogg and it was the unfortunate Steven Gordon who could only turn it into his own net.

At the end of the half Carrick could've got themselves into the break on level terms, but for a fantastic Glendinning save. A cut back ball from Lloyd Anderson found Gibson who was denied by the dangling leg of Glendinning at full stretch, with the follow up acrobatically turned over by Jenkins.

The first twenty minutes of the second half followed the blueprint of the first with both goalkeepers again virtual spectators. If either team was edging it, it was probably the visitors, which may be why David Jeffrey brought on Ryan Harpur to sure up the midfield, as he replaced Owen McKeown near the hour mark. Inside a minute Harpur had the first chance of the half, but his header from a Ross Redman corner was well over.

In the middle of the half Ballymena had to ride out a tricky ten minute spell as Carrick began to apply pressure. The closest the away side came in that spell was a long range Caolan Loughran free kick that was too hot for Glendinning to keep hold off, but the 'keeper was fouled as he tried to gather the spillage. As Carrick continued to push, Ballymena did well to restrict any real chances, but as the Sky Blues struggled to get a hold of the ball, Carrick's threat remained.

It was just as Carrick were still probing with a corner, that Ballymena countered and double their lead with ten minutes to go. Waide was the man to hook the ball away from danger with a long clearance back into the Carrick half. Great pressure from Shay McCartan forced Chapman into a mistake forty yards from goal, and Shay McCartan took over, bearing in on goal before delightfully dinking the ball over Hogg for 2-0.

The 'Gers should've pulled a goal back almost instantly when Reece Neale's ball went the whole way to an unmarked Chapman at the back post, but when he really should've scored, he fired into the side netting.
Late on Ballymena could've added a third when a neat McElroy touch found sub Ben Wylie and his ball across the face of goal was almost turned in by Harpur, but he could only slide in too late to touch the ball home.

Then, in added time, McCartan had a free kick fired into the wall, but as the ball came back to him, his second effort on the half volley was rifled goalwards and came back off the post, but Ballymena were able to ease home for a hat-trick of 2-0 wins over Carrick this season, with United having to work extremely hard for every one, but especially tonight.