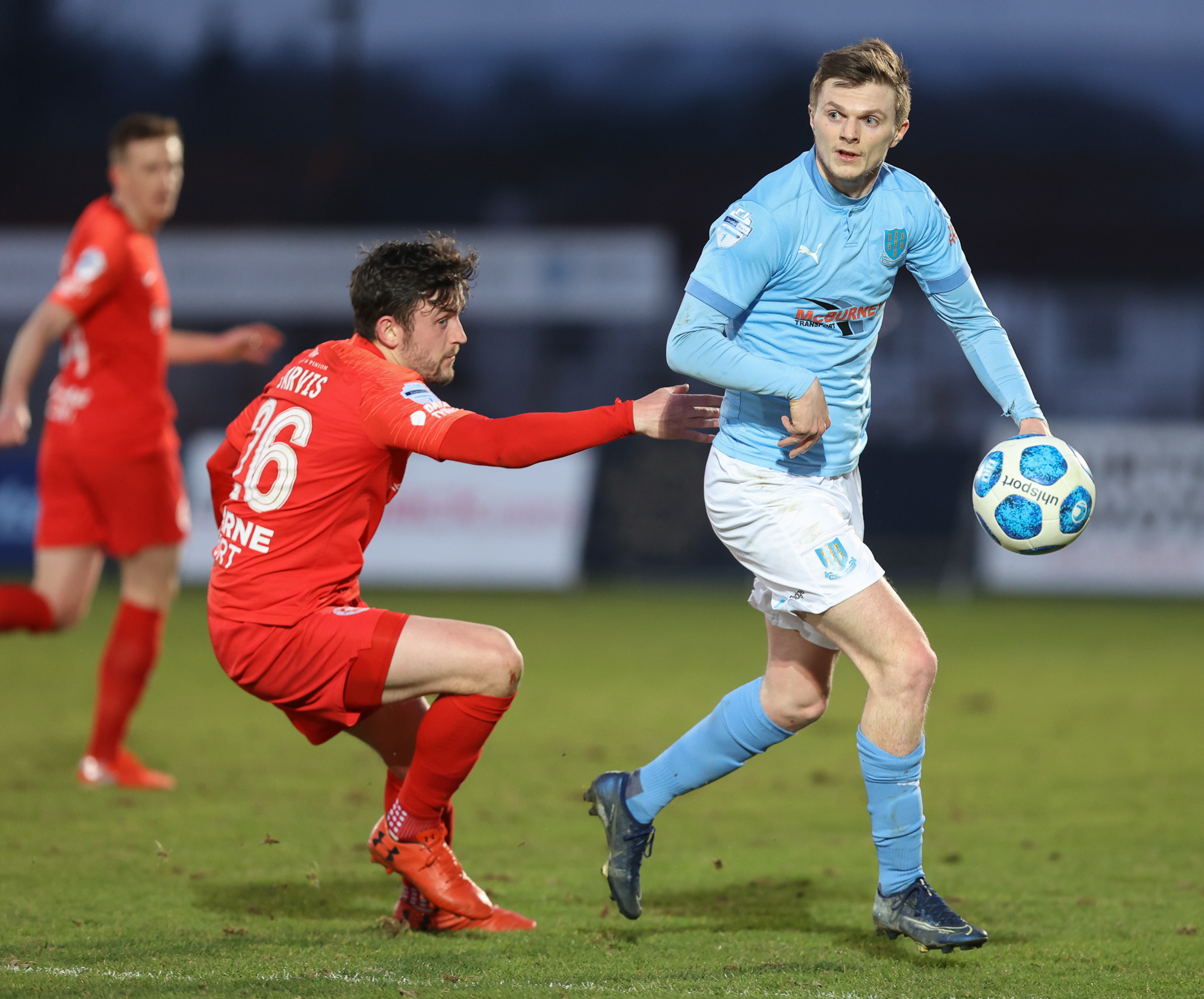 Ballymena United and Larne played out a 1-1 draw on Saturday evening in the first Shane's Hill derby at the Showgrounds this season.

The latest derby for Ballymena to be played behind closed doors started in a quiet and even fashion, but Ballymena had a good half chance inside two minutes. Joe McCready did well to fizz a ball in from the left and it found Ben Wylie, but in a decent position he mishit his shot.

On nine minutes Larne looked like they would break the deadlock when Tomas Cosgrove surged down the right and put a ball in for former Sky Blue Johnny McMurray, but his goal bound shot was wonderfully blocked on the line by Andy McGrory. The half continued to remain tight with nothing to split them, as Jude Winchester fired over at one end, while McMurray's turn and shot at the other was gathered by Williamson.

Nearing the end of the half Larne were probably seeing more of the ball but were unable to create any real danger and after Joe McCready had missed a good chance for Ballymena, shortly after it was the home side who opened the scoring. It came from a second cross in quick succession from Winchester, with his second ball in from the right a sensational cross into the six yard box, where Albert Watson could do nothing but put the ball into the back of his own net before McCready would've finished.

Ballymena kept up the pressure on the Inver Reds after the goal as a long range free kick from Shay McCartan was held by Conor Devlin and Wylie flicked a header wide after a smart free kick routine. With the last kick of the half United were given a scare when Trai Hume, who again barely put a foot wrong, missed the ball allowing McMurray in one on one, but Ballymena were happy to see the flag go up, however Williamson pulled off a top save regardless, as United took a lead into the break.

Larne tried something different straight from kick-off in the second half as Andy Mitchell tried his luck from the centre circle instantly and it wasn't a million miles away from being on target. As probably was expected, Larne would go on to see a great deal of the ball in the second half but on fifty minutes Ballymena had a good chance to make it 2-0 when Winchester switched play beautifully to put Paul McElroy in, and opted for the early shot but it was straight at Devlin.

By the hour mark the visitors were beginning to really probe for an equaliser and influential sub Lee Lynch could've ended a good team move with a goal, but shot at Williamson, before fellow sub Ronan Hale also tested Williamson. Ballymena's strong resilience was finally broken on sixty-eight minutes when Ronan Hale leveled. Cosgrove had time in a good position and he slid a good ball through Ballymena's defence to find Hale and he slotted the ball past Williamson.

Despite United conceding, they reacted well in a well contested final twenty minutes. McCartan almost put Ballymena back in front in his typical style as he picked the ball up on the halfway line and a pacy and powerful run ended with him firing narrowly over. Ballymena then had a penalty appeal waved away when Wylie was taken out, however no free kick or card was given.

Larne then had a couple of big chances come quickly after each other as first Davy McDaid failed to get contact on the ball when any solid touch would've surely sent the ball home, and then Lynch had a deflected effort go just over. In the closing stages United brought on Ryan Waide and James Knowles, who made his 50th club appearance, but in the end a well fought and even throughout contest ended in a draw and decent point for Ballymena.