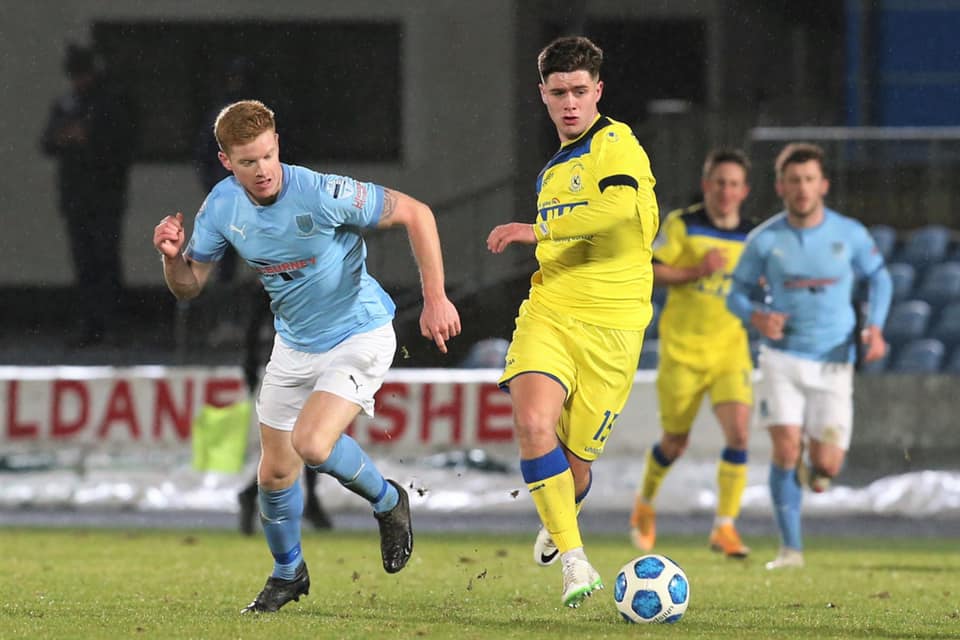 Ballymena United's eight game unbeaten run came to an end following a 1-0 defeat to Dungannon at a dreary Showgrounds this evening.

United handed a debut to recent signing Ben Wylie who came in for the injured Jude Winchester. Injury also forced Leroy Millar out, with Tony Kane taking his place and the armband. Andy McGrory and James Knowles also made welcome returns to the matchday squad.

On a cold and blustery night on a wet Showgrounds surface, the opening half an hour produced precious few chances. The visitors did start well and had half an opening in the first minutes of the game when a free kick wasn't dealt with by the hosts, before Kane eventually cleared the dangerous in the six yard box.

The Sky Blues' first chance was a good one, after some great build up play. Shay McCartan started the move on halfway and eventually could've finished it, after Wylie and Paul McElroy added some neat play, but McCartan failed to connect with McElroy's ball when ummarked on the penalty spot.

Another half chance fell Dungannon's way when Ryan Mayse tried a volleyed finish on his return to Warden Street, but his strike ended up finding the bodies in the middle of the box rather than the target, and United cleared.

After Callum Byers had headed narrowly wide for the Swifts, Ballymena had a huge chance to open the scoring through Wylie, as they finished the half well. Another piece of good build up play ended with Wylie getting in over the top by Kane, but Roy Carroll was out quick and made a top stop with his legs to come out on top in the battle of the debutants.

Shortly after, Conor Keeley looked to mark his Showgrounds debut with a goal when he drove forward with the ball and had a pop, and despite his effort always going wide, it wasn't a million miles from goal.

Shortly after, Conor Keeley looked to mark his Showgrounds debut with a goal when he drove forward with the ball and had a pop, and despite his effort always going wide, it wasn't a million miles from goal.

United continued to try and take advantage of their bright spell and Trai Hume did well to stand a cross up to the back post for Ross Redman, but under a lot of pressure he headed wide, as a fairly quiet and extremely cold half ended scoreless.

It was a pretty actionless start to the second half as well for both sides, with two refereeing decisions the pick of the opening 15 minutes. First, McElroy pounced on the ball after Dougie Wilson was hesitant, and as McElroy looked to go through Wilson, already on a yellow, brought him down. A free kick was awarded, but much to the disbelief of the Ballymena players, no red was shown. Minutes later, McCartan looked to have been brought down in the box by Byers and despite McCartan's adamant claims he was fouled, referee Christopher Morrison said no penalty.

A stop-start game began to develop as both teams unsurprisingly struggled in what was now almost monsoon like rain and strong winds. United turned to McGrory and Ryan Waide from the bench to try and get things going, but it was Dungannon who were next to go close when a corner routine saw Caolan McAleer peel off from the pack and shoot wide.

As the game entered its final 15 minutes Kofi Balmer flicked a half chance wide before Josh Kelly was denied by a truly wonderful Carroll save. From around 20 yards Kelly let fly with a sweetly struck shot first time effort that was destined to go in, before Carroll produced an incredible one handed save to put the ball wide.

That save would prove vital for the away side who took the lead on 81 minutes. From a free kick Jordan Williamson parried it out, before a spot of pinball saw Mayse denied first by Balmer and then by Glendinning, but the ball dropped kindly for Rhyss Campbell who fired home.