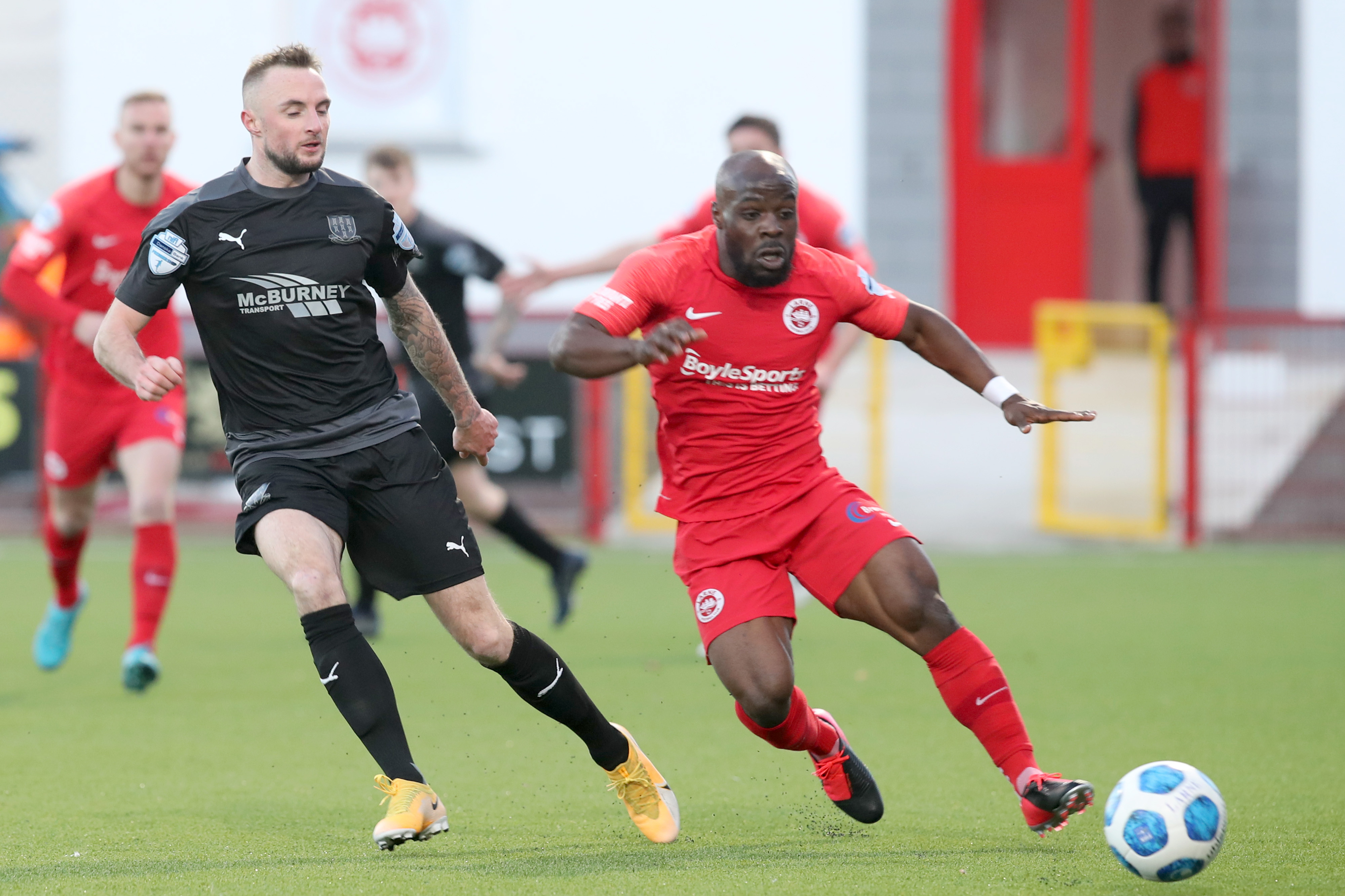 Ballymena United kicked off 2021 in style with a 1-0 victory over table topping rivals Larne at Inver Park this afternoon.

After the latest Covid-19 restrictions brought an early end to action in 2020, United returned against their derby rivals after the two week lay off, and named an unchanged side from the last of 2020.

As expected, it was high flying Larne who started better and looked to control the game. Early doors Davy McDaid cut in from the left and fired narrowly over, before Mark Randall put Marty Donnelly in with a defence splitting ball through the middle, but Kofi Balmer defended well.

Larne's possession play was almost their downfall for United's first chance, with Conor Devlin trying to do too much and losing the ball, but he recovered to deny Jude Winchester. A minute later a dazzling run from his own half by Ciaran Kelly, a run that wouldn't have looked out of place in La Liga, ended with him being fouled on the edge of the box. Shay McCartan took the free kick, but fired just over.

Despite the hosts continuing to control the play, the game became a bit scrappy at times and the Sky Blues posed a threat on the break. Within a minute Ronan Hale had looped an effort just over, and at the other end Trai Hume's miscued shot fell for Paul McElroy in acres of space in the box, but it came quickly at an awkward height and he fired over.

In the final minutes of the half it was mostly all the Inver Reds. McDaid drove into the box to find Donnelly who was denied by the outstanding Ciaran Kelly who blocked. The Larne duo linked up again on the whistle, this time Donnelly striking wide, as the half ended goalless.

The majority of the second half proved to be a Larne onslaught, but as chance after chance came, United stood firm.

As McDaid kept at the Sky Blue back line, he squared the ball for Hale in the six yard box, but they were denied by a timely Jonny Addis interception. On 55 minutes Tiernan Lynch will have wondered how his side didn't go in front. Hale played in Randall at close range who looked certain to score, but he was stopped by Jordan Williamson. The ball went back out to Donnelly outside the box, and his effort came back off the upright.

The waves of Larne attacks didn't let up as Hale saw a shot blocked and it fell to Randall, but he was kept out by a stunning Balmer block. With the pressure lifted on Williamson's goal for a few minutes, the Braidmen almost went ahead out of the blue, when Ciaran Kelly towered over everyone else to meet a corner, but it was cleared off the line by Randall. Williamson had saw most that came his way dealt with by the defence in front of him, with all five impressing, but when called upon the 'keeper pulled off a top drawer save to keep out Donnelly from distance.

Another block from Ciaran Kelly kept out Donnelly as the half progressed, before Randall showed great technique with a dipping volley from 20 yards which dipped inches over, but with ten minutes left on the clock Ballymena stunned the home side. United won a free kick down the left wing and it was whipped in by Ross Redman, who unsurprisingly was on the money again, and his ball was met by Kofi Balmer who headed home, as he continues to be the derby day hero this season.

It meant a tense final ten minutes for Ballymena, but Larne failed to create many big chances, the closest they came being Tomas Cosgrove heading wide from a corner, as Ballymena saw out the win to hand Larne their first defeat this season, as United's impressive run of form gathered continues.