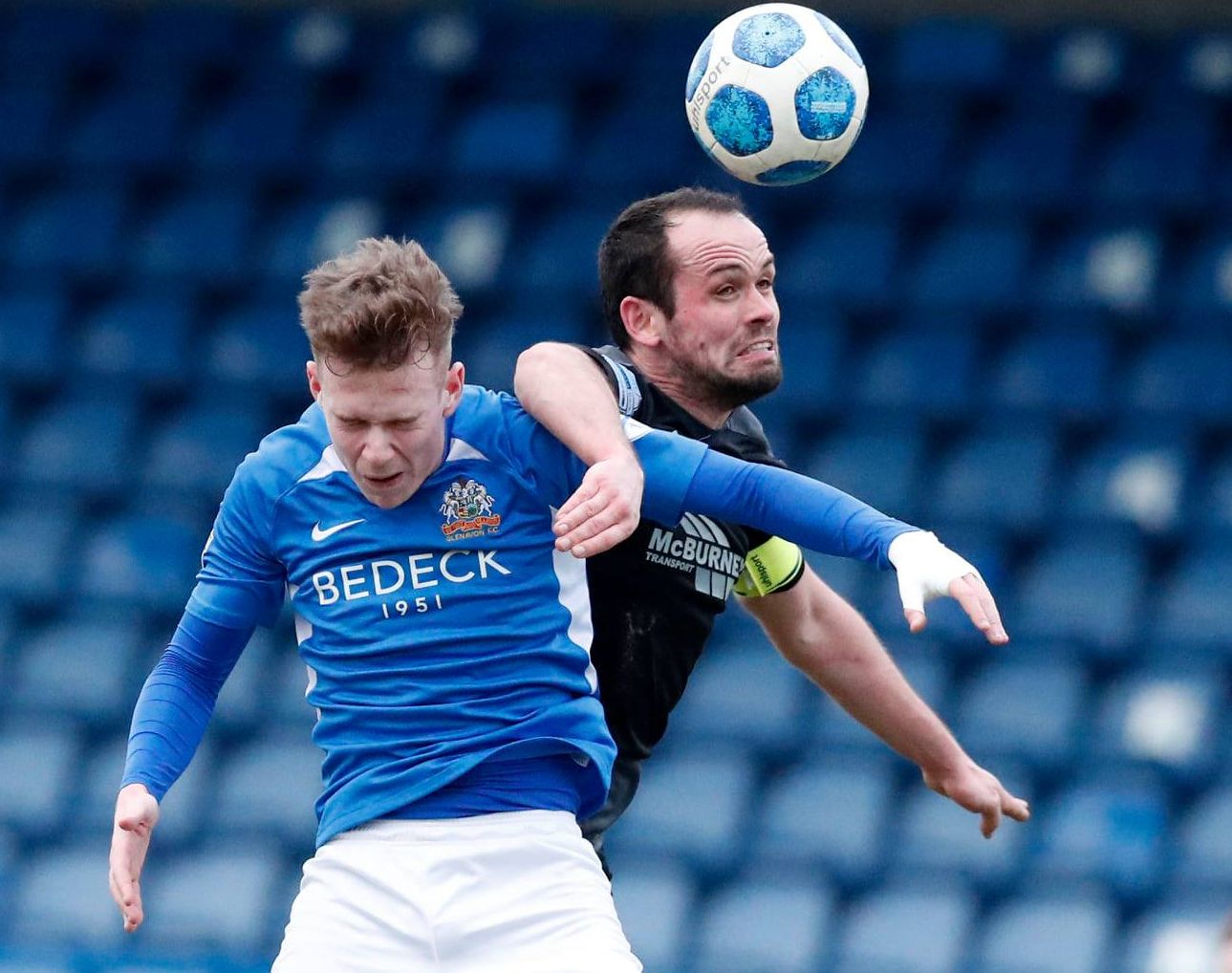 Ballymena United's poor recent record at Mourneview Park continued after a 2-1 defeat to Glenavon this afternoon.

There was one change to the United side that lost to Dungannon in midweek, as Jude Winchester came back into the side at the expense of Ben Wylie.

It was an even start to the game in Lurgan without any real chances, as Shay McCartan flashed a shot wide at one end, while at the other end Jordan Williamson did well to claw a Michael O'Connor free kick over the crossbar. On 15 minutes United missed a golden opportunity to go ahead. Paul McElroy did well to find Winchester with a hooked ball and he played in McCartan in space in the box, but by the time he pulled the trigger, Craig Hyland was out big to make a good save.

Glenavon soon found their stride as Ballymena struggled to settle, and on 18 minutes the Mid Ulster side took the lead. The hosts were finding joy down the left and from there Peter Campbell found Conor McCloskey unmarked at the back post.

McCloskey's first shot was fantastically saved by Williamson, but unfortunately the ball fell perfectly for the ex-United man again and he slammed home from close range.

With the Braidmen struggling all over the park Glenavon sensed blood and continued to apply significant pressure, and a well hit volley from McCloskey from 20 yards forced Williamson into another stunning save, this time tipping the ball over the bar.

On 34 minutes Ballymena's day got no better in a disastrous minute. First, Winchester was forced off after pulling up, but before Ryan Waide had even replaced him Glenavon had a penalty, when Ross Redman was adjudged to have handled a McCloskey cross. Michael O'Connor stepped up and squeezed the penalty past Williamson to make it 2-0.

Towards the end of the half Conor Keeley was unlucky not to get enough on a corner to send it goal wards, but in a first half were United weren't at it, a superior Glenavon went into half time with a deserved 2-0 lead.

The second half failed to really catch fire for either side, with chances few and far between, certainly in the opening half hour. McCloskey had been bright and almost added his second of the day with a header from a corner, but Williamson was equal to it.

On 56 minutes the Sky Blues had a huge chance to half the deficit through Waide. Trai Hume delivered a top draw deep cross from the right byline and Waide got up to meet it with his head, but when he probably should've at least got it on target, he headed wide.

A scrappy period of play broke out from there, as Glenavon's level dipped slightly and United still struggled to get a foothold. With 20 minutes to go the visitors suffered more injury woes as Kofi Balmer, on his 100th club appearance, was forced off with what looked like a hamstring problem. He was replaced by Andy McGrory.

Glenavon could've made it game, set and match when the in form Daniel Purkis headed over at the near post from a corner, before Hume flashed a first time volley well wide at the other end.

As Ballymena tried to force the issue in the final 10 minutes, Glenavon were able to hit on the counter and Campbell should've done better when he could only curl on effort on the edge of the box straight at Williamson. A minute later the hosts broke again 2 on 2 and it ended with Matthew Fitzpatrick's shot being dragged narrowly wide.

In the second minute of three added on Ballymena grabbed a consolation goal. McGrory's corner was flicked goal wards at the near post by Joshua Kelly, and despite Hyland's best efforts in the Glenavon goal, he could only help the ball into the bottom corner.

Kelly's goal was too little too late for Ballymena, who failed to get going from the first minute and the defeat caps a disappointing few days.