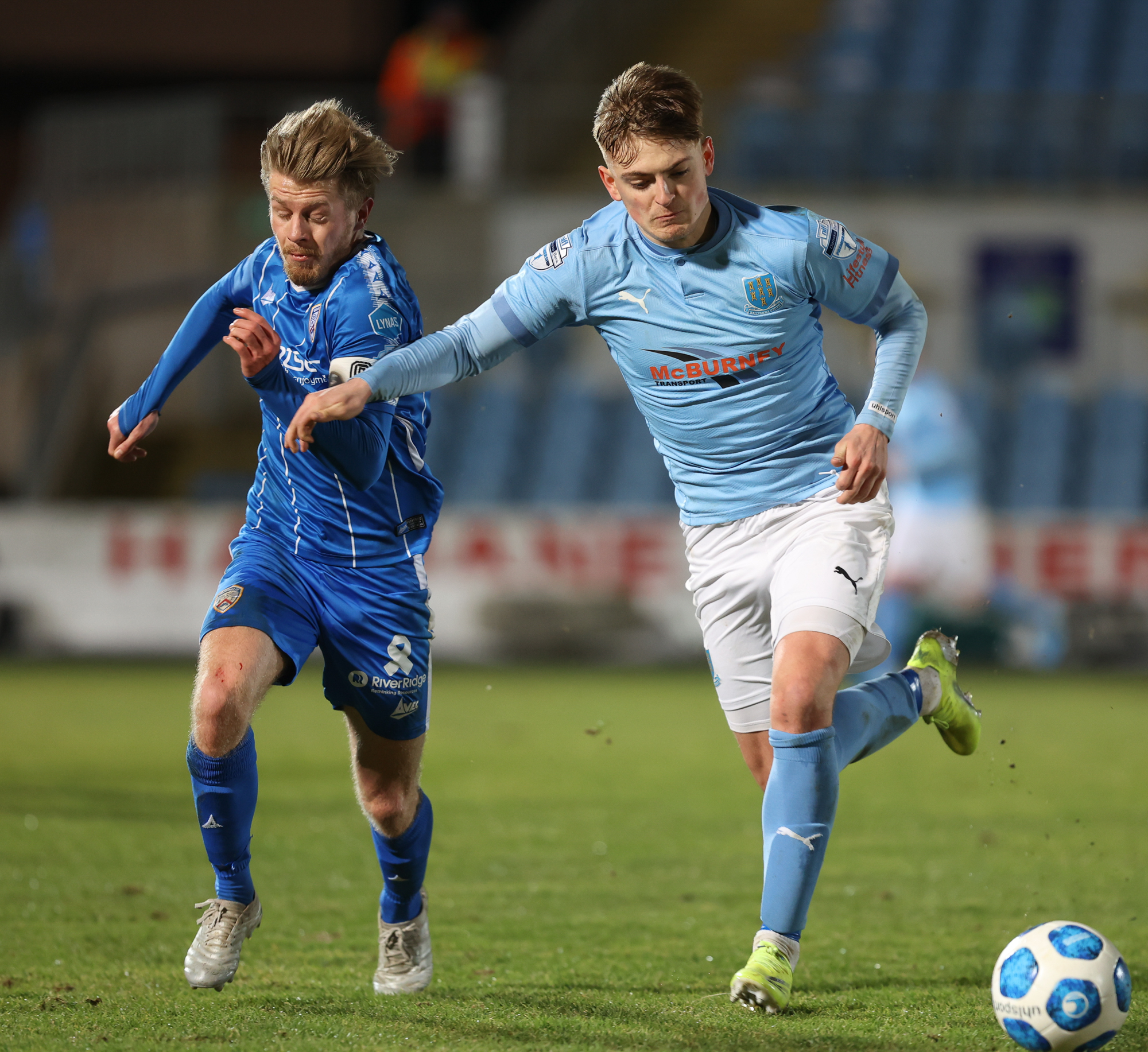 Ballymena United suffered a third straight league defeat with a 1-0 loss to Coleraine on derby evening at the Showgrounds.

Captain Jim Ervin came back into the starting XI for United's first game in 10 days, with Ben Wylie and Andy McGrory also coming into the side.

United started the A26 derby well and inside 4 minutes had half a penalty appeal waved away when Paul McElroy went down at the byline inside the box. On 9 minutes Coleraine had the ball in the net through Curtis Allen, but there appeared to be two offside's in the build up, before the goal was finally ruled out for Allen handling the ball.

Ballymena continued to look the more likely, without overly threatening. Shay McCartan passed up a decent chance to shoot inside the box, instead opting to try and pick out Paul McElroy, but the cross was blocked. Coleraine's best looks at chances came from the early ball through the middle and it almost worked when James McLaughlin hit the post, but the flag had gone up again for offside, before Jamie Glackin was booked for diving in the Ballymena box.

With over half an hour gone neither goalkeeper had anything to do, and it was Lyndon Kane making the saves for Coleraine as headed a Conor Keeley header off the line, before Keeley's effort on the rebound went over the crossbar. Towards the end of the half Coleraine had a couple of half chances as first Aaron Traynor was given time to shoot from outside the box, firing well wide, before Allen headed over at the near post.

At the other end, McCartan let fly from 30 yards after cutting in from the left, and after striking it well, Deane made a good save, as an even half with some decent play, but little chances, ended goalless.

The Bannsiders started the second half well and had another goal disallowed when Allen scored, but only after Jordan Williamson had been fouled. Shortly after a good Glackin run ended with a ball that narrowly escaped the boot of Allen.

On 57 minutes McLaughlin fired an awkward first time attempt well wide, but four minutes later the visitors broke the deadlock through Kane. Stewart Nixon's ball in from the right was cleared by United to the edge of the box, but there waiting was Lyndon Kane who hit an unstoppable shot past Williamson who was motionless. A bit of afters was had between both sets of players as the hosts felt Tony Kane had been fouled before the goal, with Ervin seeing yellow.

The Braidmen had half an hour to hit back, but produced very little to come close to leveling, with the chances drying up for the away side as well. United turned to Ryan Waide, Joe McCready and James Knowles as the half progressed, but the Sky Blues' only shot on goal in the final half hour came from McCready, and that was five minutes from the end. The effort itself came from 20 yards, but was easy pickings for Deane.

With Ballymena struggling to create anything and Coleraine happy with their advantage, the game petered out into added time, when Williamson saw red for the hosts. The goalkeeper was sent off for a late challenge on Nixon after play had already been stopped and, with all of United's subs made, McCready took over in goals for the final two minutes.

The striker had nothing to do as play was ended shortly afterwards, with United unable to make it three straight derby wins in a night to forget at an empty Showgrounds.