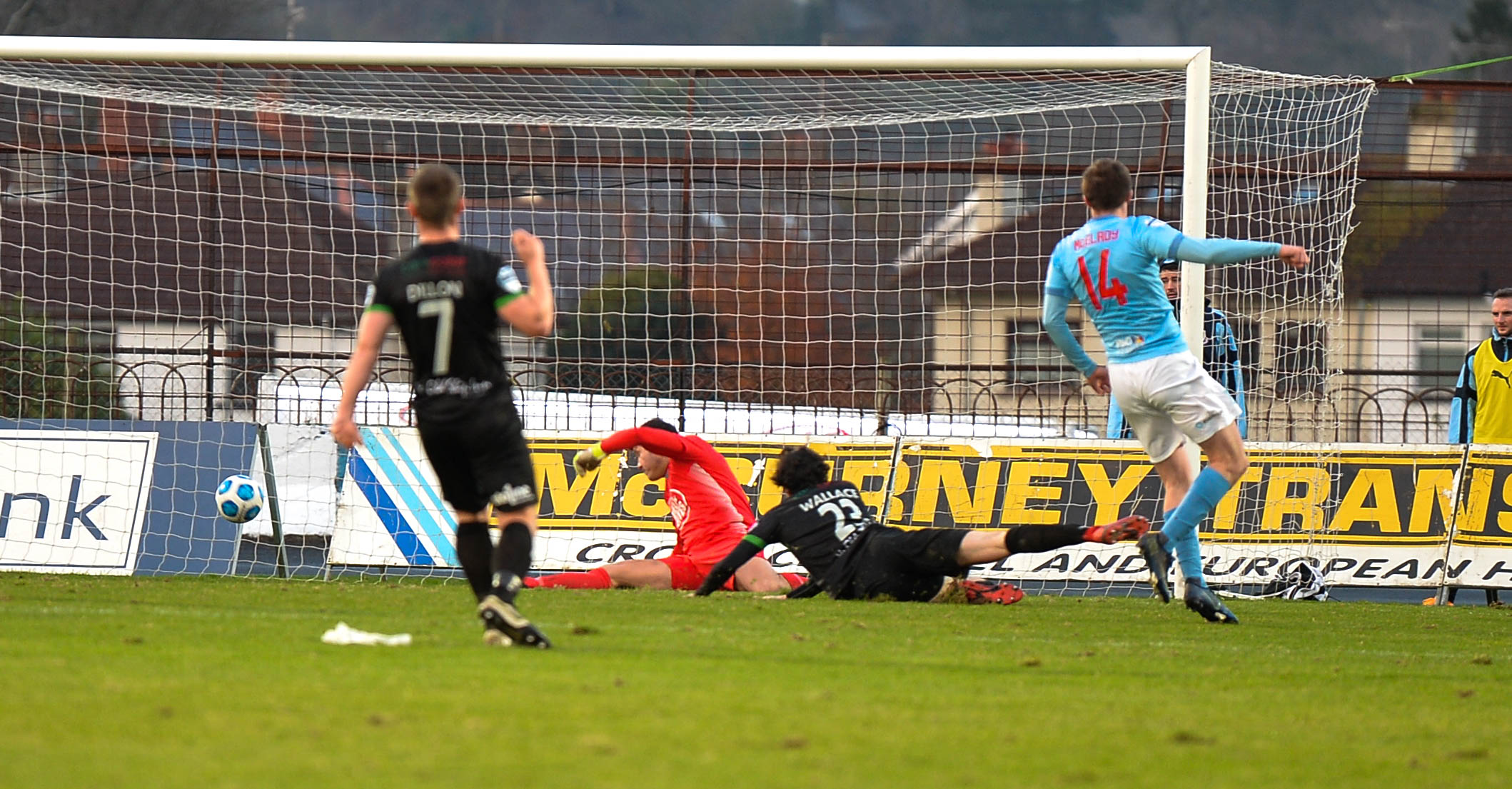 Ballymena United picked up a much needed three points with a comfortable 2-0 win over Warrenpoint at the Showgrounds on Saturday.

The Sky Blues made three changes to the side that was well beaten by Glenavon eleven days ago. Ryan Harpur, Jude Winchester and Ryan Waide all made way for Kofi Balmer, Josh Kelly and Cathair Friel, who made his first appearance of the season.

After a string of poor performances in recent weeks, the Braidmen will have been happy with a much improved showing in the first half on Warden Street. In saying that, the first chance of the game fell the way of the visitors, with Kealan Dillon flashing an effort wide. From there it was almost all United, helped in part by a continuous run of inviting crosses from Ross Redman. The full back saw an in-swinging corner almost go in, with 'keeper Gabriel Sava clawing it off the line, before Leroy Millar had a shot blocked.

Shortly after Paul McElroy went close when he turned and got a shot away in the box, but sent it over the crossbar, but on 15 minutes Ballymena moved in front. United had a free kick just wide of the box on the right hand side and it was a perfect ball again from Redman to pick out Cathair Friel, who got up highest and powered a header home.

Warrenpoint had a free kick of their own five minutes later, this time right on the edge of the box, but Dillon's effort went just over. That was the away side's last chance as Ballymena fully gained control of the game, with a lot of tidy play. McElroy looked set to tap the ball home after a menacing ball across The Point's six yard line, but Stuart Hutchinson did well to cut the ball out with a last ditch clearance. Redman's deliveries were showing no signs of letting up and from the left hand side this time he picked out Friel again, but his header was saved by Sava. In the next attack Millar had a chance, but his shot was deflected over.

With United continuing to press hard for a second McCartan had a daisy cutting effort go narrowly wide, but on 41 minutes Ballymena got a second goal they thoroughly deserved. McCartan drove United forward well before Redman played a delightful angled ball through Warrenpoint's defence to find Paul McElroy, who cut inside and fired home for his third of the season. Two top assists from Redman helping United go into the break two clear.

The second half won't live long in the memory, with not an awful lot for the limited United fans in the ground to see, however Ballymena remained very much in control. Warrenpoint were certainly seeing more of the ball, but Jordan Williamson had very little to do in the Sky Blue goal. It would take until the 69th minute for a shot, but when it did come it almost put The Braidmen out of sight. McCartan slipped a lovely ball through the Warrenpoint centre back's to find Friel, but Sava came out well to smother the chance.

Despite being rarely tested, United's defence was still alert and Ryan Swan would've been in on goal but for a timely clearance from Jonny Addis. Minutes later Dillon wriggled his way into a chance in the box and probably should've hit the target, but his ever rising shot was helped over the bar by the faintest of touches off Addis again.

With a couple of minutes left sub Jude Winchester put Redman in, but somewhat out of his comfort zone he never really looked like getting a shot away, and instead tried to find McElroy at the back post, but it was cleared. Winchester almost scored himself in added time with a couple of half chances in succession, but he seemed to slightly lose his footed on both occasions, however United easily saw out the result.

A big win for Ballymena which also puts an end to some unwanted runs, with a first win at home in nine games and a first clean sheet at home in eighteen.