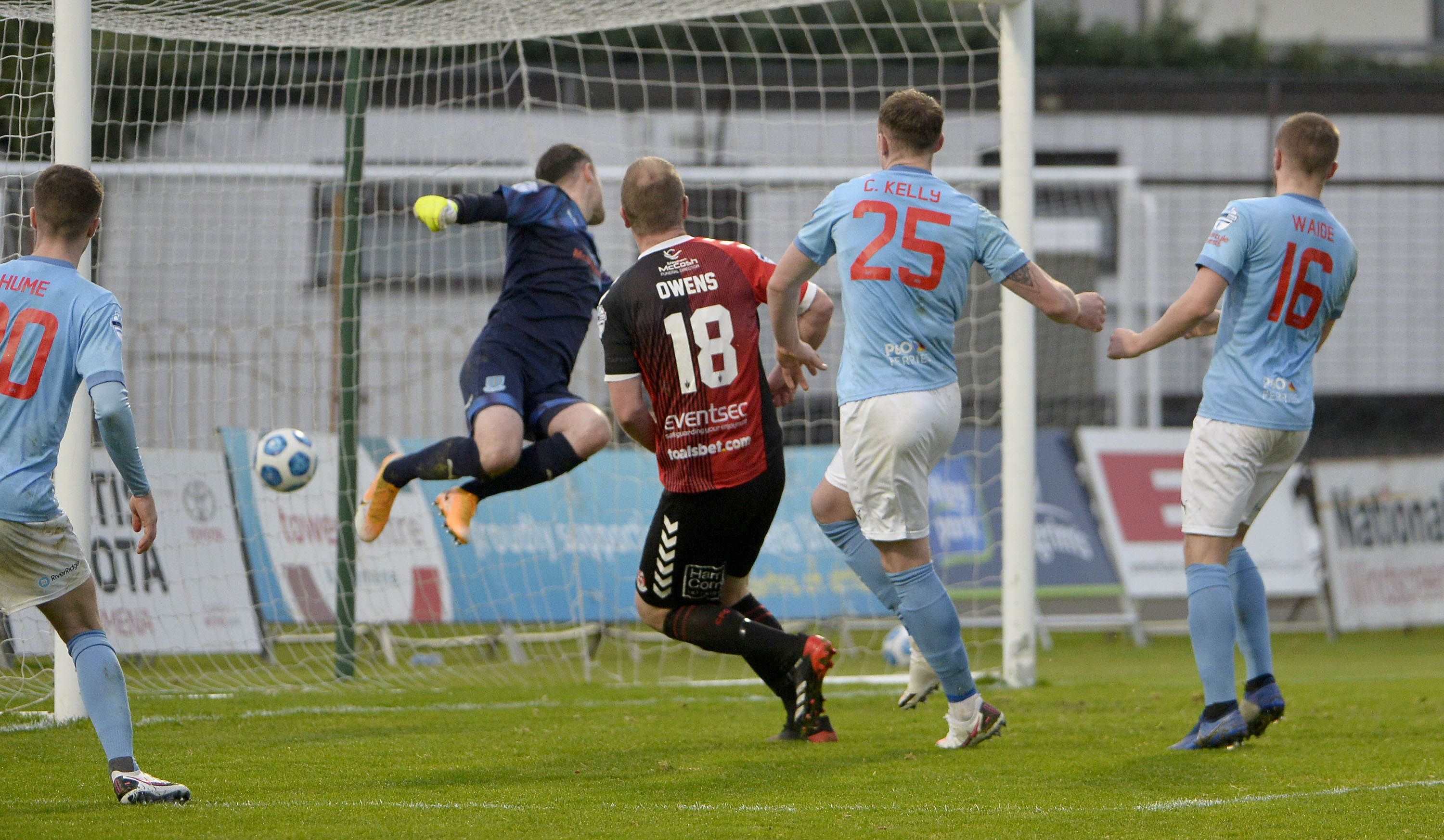 Ballymena United had a second half to forget as they suffered a heavy 4-1 defeat at home to Crusaders on Saturday afternoon.

As it was the last United game before Remembrance Sunday, a two minute silence was held before wreaths were laid on the pitch by David Jeffrey and Stephen Baxter.

Two changes were made to the side that lost in Larne last week, with Ryan Harpur and Jonny Addis replacing Owen McKeown and Kofi Balmer.

The first half was fairly even in terms of chances but Ballymena looked solid and dangerous throughout. After Jamie McGonigle had a shot deflect narrowly wide in the opening minutes, Ballymena got into their stride, with Jude Winchester seeing a low effort parried out by Sean O'Neill and Shay McCartan dragging a shot just wide after a driving run.

Around 20 minutes in the visitors had a couple of big chances. First McGonigle found himself in on the left hand side, but from a tight angle his lifted shot over Ross Glendinning wasn't on target, with an impressing Ross Redman tidying up the danger. Minutes later Crusaders should've been ahead when Adam Lecky, back at the Showgrounds for the first time since leaving during the last window, worked himself a chance from six yards out, but somehow skied it over the crossbar.

On 24 minutes The Sky Blues took the lead with Paul McElroy, part of the deal that saw Lecky move to Seaview, scoring against his old side. It started with a quality long ball from Ryan Harpur which found Winchester on the right and he did well himself to find McCartan. His goalbound shot was neatly flicked home from close range by McElroy to score his second of the season.

When Crusaders did go forward Ross Clarke and McGonigle looked their most dangerous outlets, and Clarke was able to find the latter at the back post but his drilled shot was at Glendinning who gathered. McCartan went close for the hosts, heading onto the roof of the net, as the half began to come to a close, but it was Crusaders who threatened late on as Addis produced some fine last ditch defending to stop a certain Philip Lowry goal, before Jordan Owens got on top of United's defence for the first time all half to head, but Glendinning saved, as a strong half from Ballymena was rewarded by a 1-0 lead.

If Ballymena had impressed throughout the first half, the second couldn't have been more different with the Braidmen not at it from kick-off.

The Crues levelled on 48 minutes after a huge error from Glendinning, but United had a right to feel aggrieved. McElroy almost broke through from the halfway line before being seemingly held back, but the referee wasn't interested and seconds later a long ball up looked like easy pickings for Glendinning, but as he went to routinely pick the ball up it went through his hands and Ross Clarke was on-hand to slide the ball home.

It would prove to begin a bit of a collapse and within five minutes Crusaders were ahead. Jordan Owens had been extremely well marshaled by Ballymena in the first half but this time he was able to evade his marker on a free kick and head home from close range after Jordan Forsythe's free kick.

The quick fire goals looked to knock Ballymena who struggled to get anything going in a forward sense, with an ever-rising McCartan half volley the best they could muster up. After a rocky second half showing Glendinning did well to hold onto a well struck effort from McGonigle, but on 77 minutes Ballymena were found wanting again in a case of deja vu.

Another free kick in from Forsythe was again met by Jordan Owens, who had managed to find a good deal of space in a packed box, and he again headed home to open up a two goal lead.

David Jeffrey made a triple change from the bench with ten minutes to go, bringing on Owen McKeown, Tony Kane and Joe McCready, but two minutes after the changes it was four.

Declan Caddell, on the pitch a matter of seconds, was able to easily run in behind United's defence to get on the end of a Clarke through ball and slot into the bottom corner. United's best spell of the half came in the final five minutes with Kane and McCartan going close, but a poor second half showing left them well beaten.