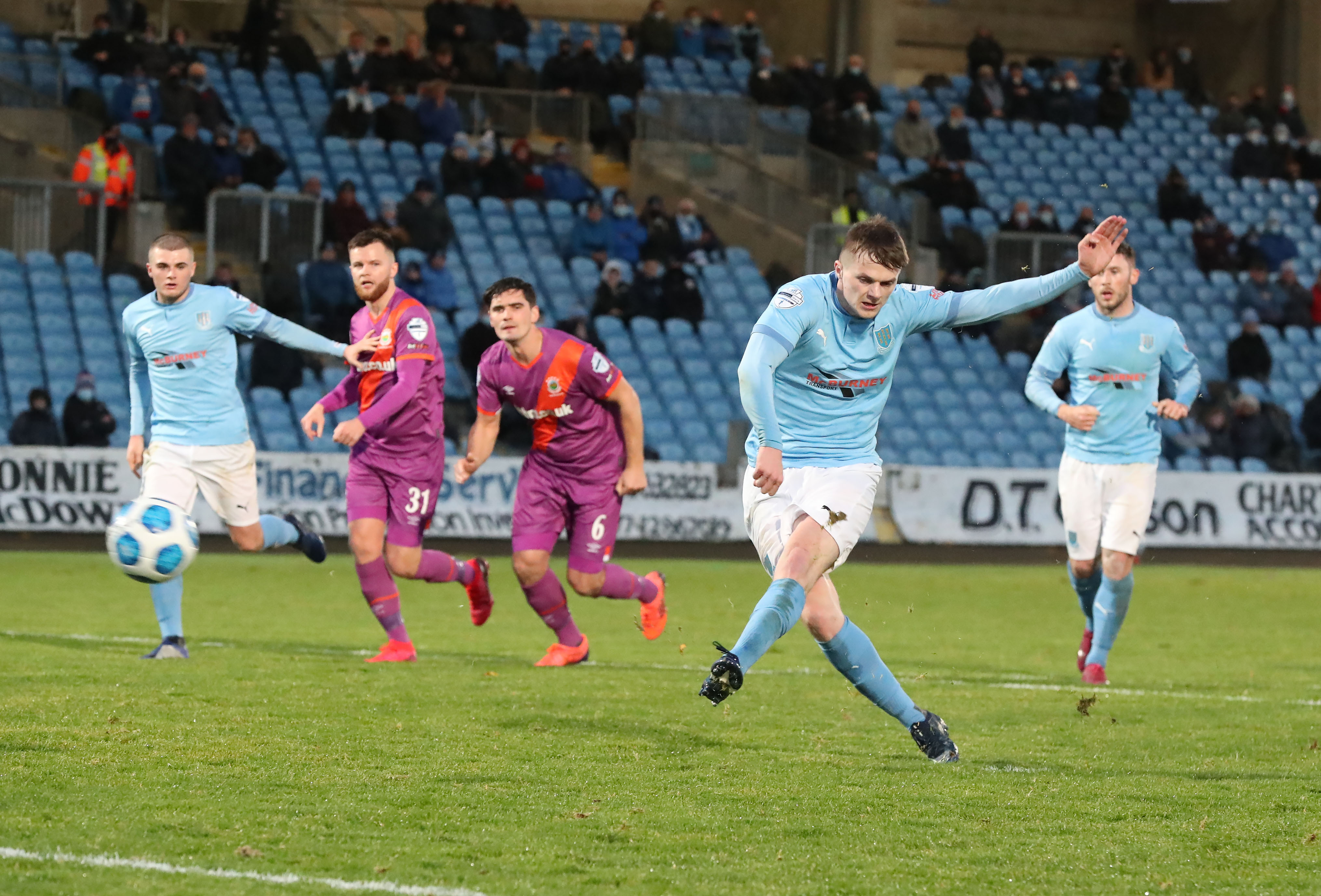 Ballymena United's competitive return to The Showgrounds ended in a narrow 3-2 defeat to Champions Linfield on Saturday evening.

Over seven months on from their last league game on Warden Street, United made two changes from the side who won at Coleraine, with the suspended Josh Kelly replaced by Ryan Harpur and captain Jim Ervin in for Trai Hume, who was ineligible.

In front of around 600 socially distant fans at the Showgrounds United started reasonably well and were inches away from taking the lead on 7 minutes. Ryan Waide's corner was met by Ciaran Kelly, but his header was cleared off the line by Kirk Millar.
Within two minutes Linfield were up the other end and scoring as the Sky Blues' defence was breached for the first time this season. Navid Nasseri's run down the left ended with his cross well behind Kirk Millar, but he got in under control and fired home into the far bottom corner, giving Ross Glendinning no chance.

Ballymena responded well and again looked to take advantage from a set piece, this time Steven McCullough's corner met by Leroy Millar, with Chris Johns tipping it wide. The Blues' main threat going forward was that of Nasseri and after picking up the scraps from a corner, he cut in and hit a neat effort from all of 25 yards onto the top of the crossbar. The side's traded chances around the half hour mark as Andy Waterworth headed into the side netting for the visitors, while Waide fired straight at Johns for United.

On 37 minutes it was 2-0. Navid Nasseri picked the ball up on the left again and after running at Ervin he opened his body up and fired a fantastic effort into the top corner.

Now with it all to do the hosts had a way back into the game just three minutes after Nasseri's goal when they were awarded a penalty. Shay McCartan, a danger throughout the half, went on a charging run down the right and into the box, were he was brought down before shooting by Jamie Mulgrew. Paul McElroy stepped up and emphatically smashed his penalty past Johns, who'd went the right way, to score his first in Sky Blue.
Right on half time more dazzling feet on the edge from McCartan saw him turn Bastien Hery, but his shot flew just over as a tight half ended 1-2.

Linfield got off to a fast start in the second half and inside the opening minute Jimmy Callacher powered a header goalwards, but Ross Redman did well to head clear. Linfield continued to probe and Jordan Stewart found a pocket of space to get a shot away, but it went well wide without deflection, but somehow a corner was given. From the corner Mark Haughey headed just over.

On 54 minutes Linfield regained their two goal lead in controversial circumstances. United were awarded a throw in by the linesman in front of the dugouts, but after some protestation and disagreements referee Shane Andrews gave the throw in to Linfield, who took full advantage. The ball was switched to Millar who was able to get a cross in, and it was on the money for Jordan Stewart who got in between Ervin and Kofi Balmer to head home.

The next twenty minutes saw little action from either side with Linfield proving hard to break down and Ballymena lacking a bit of the cutting edge from the first 45. The only real point of note being a heavy hailstorm shower which lasted all of five minutes. Jude Winchester and Kenny Kane both entered the fray to try and get the hosts back in the game and they almost were when more delightful footwork from McCartan saw him shot from the edge, but it went just wide. Owen McKeown came on for his competitive debut with five minutes left and made a decent cameo role, but the game was already gone.

With the final kick of the game the Braidmen pulled one back through Leroy MIllar who headed home in a crowd of bodies from Redman's cross, but in the end United were narrowly edged out in a good game of football.