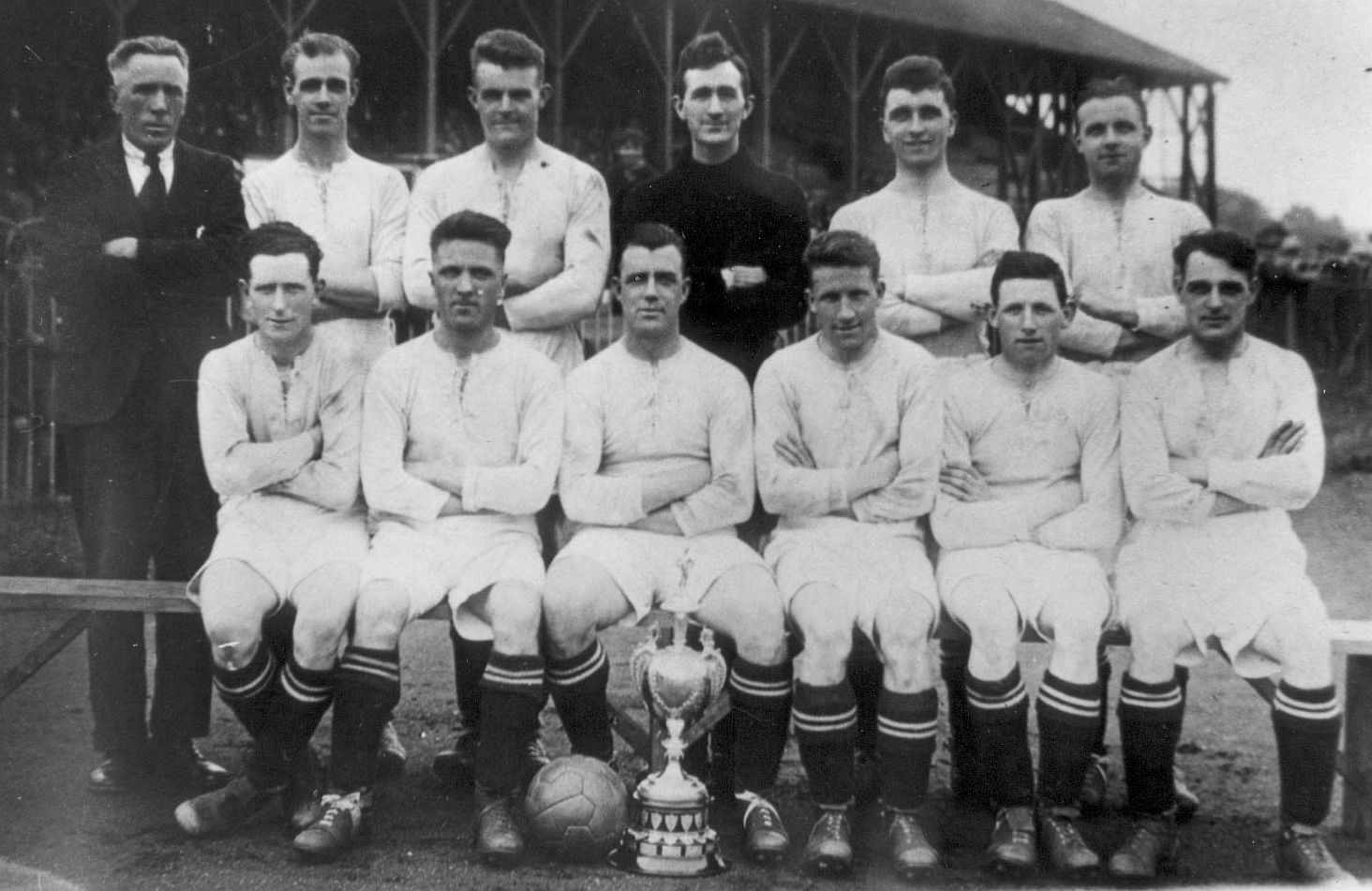 There is nothing surer that Linfield's victory over Ballymena at Windsor Park last Saturday in what was virtually the deciding match in the City Cup competition was thoroughly well deserved.

Ballymena never got properly settled down to play anything like their usual game, their display when contrasted to that given in recent matches, being rather disappointing. Linfield played a winning game, and were well worth their three goal victory. A crowd of something like 13,000 saw the match, the gate amounting to £409.

Linfield kicked off, and in the opening seconds Gough was called on to handle. McNinch broke up the next attack, and Girvan, getting away on the right, swung the ball across for Howard to send behind. Bambrick, Linfield's live-wire and record scorer, was conspicuous in a fast run, but he failed to get the better of McDiarmid. In the next minute the same player took the ball along the left and sent across goal, where Houston made an effort to connect but could not reach the ball, thus missing a golden chance.

In a Ballymena attack McCambridge headed past, and then Houston made ground and gave to McCracken, whose shot was only inches wide. A curling shot from Adams was well handled by Gough. Rainey was tested for the first time when Girvan sent in a fairly fast shot, and when the goalie cleared Cassidy met the ball but his effort was wide of the mark. A corner forced by Shiels still left he score-sheet blank.

A free to Linfield found two of the dark blues bearing down on Gough, and when a goal seemed a certainty the Ballymena custodian brought off one of his brilliant saves and was heartily applauded by the large crowd when he got the ball away. Following another corner to Ballymena Girvan made a nice attempt to score, but Rainey was ready.

Pressure by Linfield was succeeded by D. Reid taking a free kick which he sent behind. Then Girvan gave Mitchell a chance for a shot, and again Rainey coped with the effort. After an attack was stemmed by McNinch the Linfield forwards pressed even more, and when the ball came out to Moorehead he shot hard and strong only to miss by inches.

Gough saved in quick succession from Bambrick and McCaw, and in the next minute McCaw was almost through when McDiarmid conceded a corner as a last resort. Both this flag kick, and another which followed on its heels, were abortive.

Playing first-time football Linfield were always dangerous, and again McCaw forced a corner which met with the same fate. Nice work by Cassidy opened up a Ballymena attack, in which McCambridge crossed out to Girvan, whose effort brought another flag kick, from which Rainey saved when McCambridge headed into goal. Corner kicks were at this stage a feature of the game, another one coming off when McDiarmid conceded it to stop Bambrick from scoring.

At the other end Rainey picked up a shot from Howard, and Girvan was conspicuous with another good try. Within a few minutes from the interval the scoring opened when Harold McCaw, after Gough had pulled down a shot from Bambrick, propelled the ball into the net, amidst thunderous cheers. In the sortie Gough was laid out, but soon recovered.

Linfield were early agressive on the resumption and Gough was called into action. A long punt towards goal by J. Reid gave the Ballymena forwards a chance, and in the subsquent melee a corner was awarded. From now on Linfield were always in the picture. They played the better football, and only for Gough's steadiness in covering up the faults of the backs would have scored early in this half.

A couple of corners came the way of Linfield, and then Bambrick made good use of a pass from McCaw, striking the crossbar with a great effort, McDiarmid clearing on the rebound. Houston was playing better in this half than in the first, and once he gave Bambrick a fine opening, but Gough was on the spot again.

Already on the decline, Ballymena's hopes of recovery received a nasty jolt when a penalty was awarded against J. Reid for fouling McCaw. George Moorehead took the kick and scored with a fast grounder. Linfield continued on the offensive and forced numerous corners, the Light Blues' defence coming in for a hot bit of work.

For the first time Shiels made a dash for goal and led some of the Linfield defenders a dance, then putting out towards the wing, but Cassidy could not reach the ball in time. Ballymena had a short spell of pressure now, and both Girvan and Cassidy had tries, but in one case the shot was charged down and in the other it went wide. Then Girvan had afast run, and centred the ball into Cassidy, who turned it past Rainey into the net. There was astronishment amongst the Ballymena supporters when the referee ruled off-side. This was almost impossible, because Girvan passed the ball to Cassidy almost from the goal line, and the latter was close in when he scored.

It was just after this that Linfield got their third goal, the best one of the lot, Billy Houston making good use of Bambrick's pass. Before the finish Girvan had a couple of tries, but could not score.