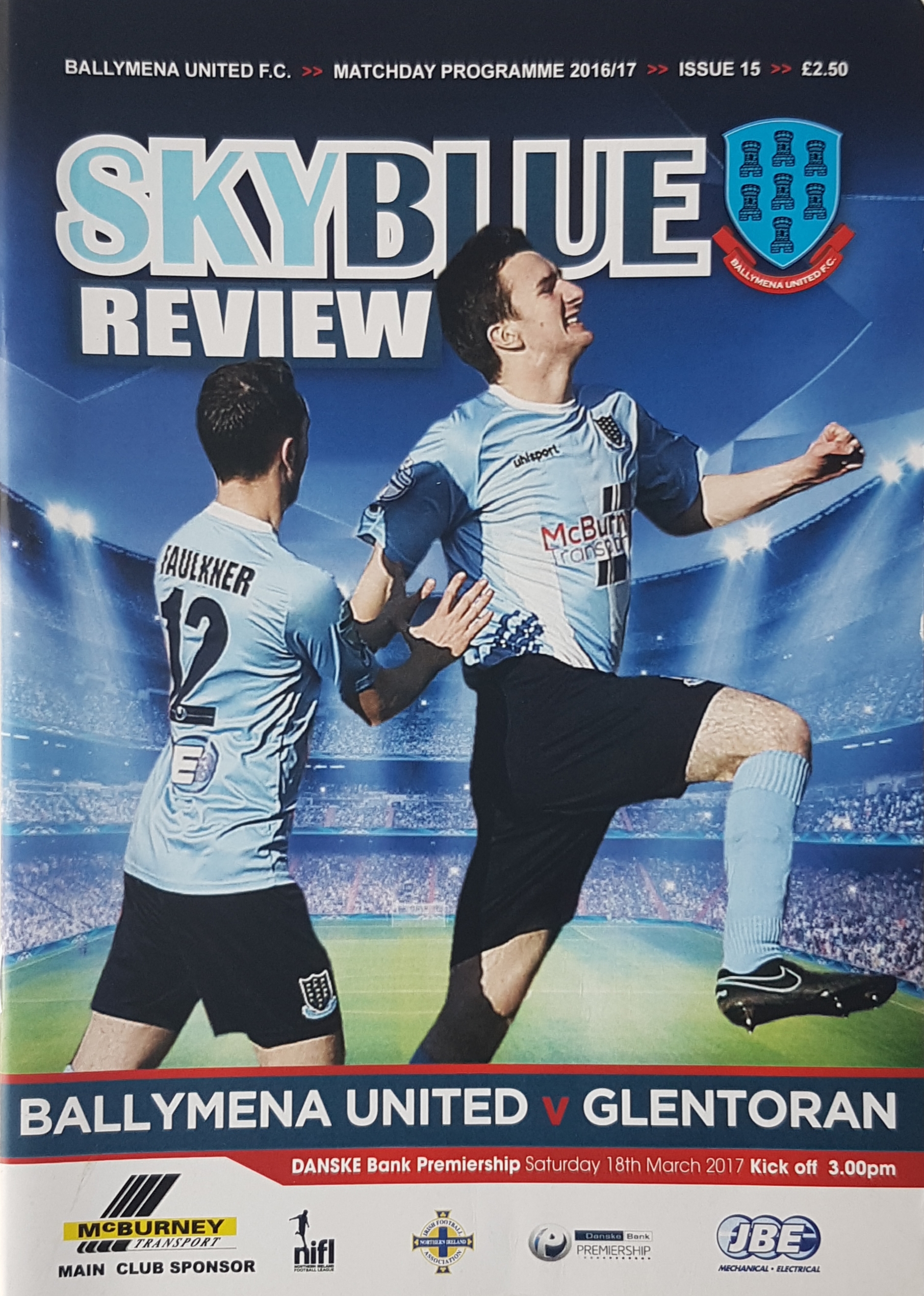 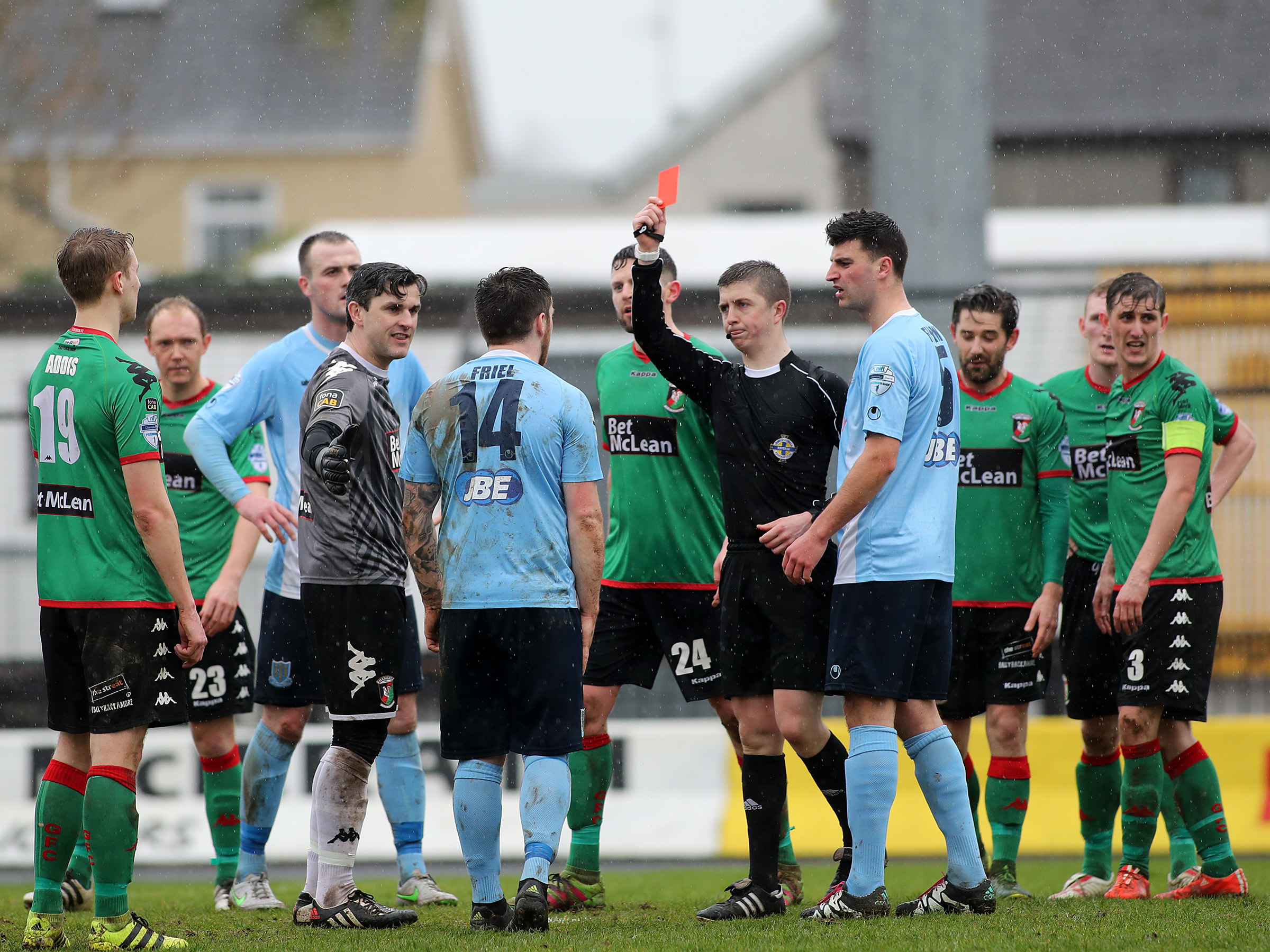 Ballymena United were defeated 4-2 by Glentoran in the Danske Bank Premiership at Ballymena Showgrounds today.

The game got off to a fast paced start with a trio of Sky Blue chances in the open 5 minutes. The first fell to Cathair Friel, who was set up by Joe McKinney, but the striker could only hit the goal support from close range. Next up was McKinney who had a go from just inside the box, but his low shot was stopped well by Elliott Morris.

The Glens 'keeper was then adjudged to have picked up a back pass giving United a free kick from 6 yards out, but Braniff's effort was blocked on the line. The away sides first chance came 9 minutes in when Curtis Allen was presented with a free header, but Tim Allen made a terrific save onto the crossbar. 10 minutes later James Ferrin also had a great chance with a header, this time from a corner, but he wasn't able to keep it down.

On 29 minutes Glentoran were handed the chance to take the lead when McKinney handled the ball inside the box to concede a penalty. Curtis Allen stepped up and beat his namesake Tim in the United goal with a well placed penalty into the bottom right corner.

However within a minute, Kyle Owens was denied by a great one handed save from Morris. Right on the half time whistle, the ball fell kindly for Braniff just inside the box, but his half volley went high over the bar.

Shortly after the restart, Glentoran could've doubled the lead through Nacho Novo. Ross Redman picked out Novo in the box, but he headed wide. Then, on 58 minutes, Ballymena levelled. A dangerous free kick from Tony Kane was floated into the box were it was met by Jonathan Flynn who glanced the ball home with his head for his second goal in as many games.

The game was level for just 4 minutes when Glentoran regained the lead. Owens was adjudged to have committed a questionable foul, and as he was being spoken to by the referee, Glentoran were allowed to restart play, much to the bemusement of the home crowd, and Kane burst forward to find Curtis Allen who flicked home his second of the game.

The Glens should've added a third when Kane again was able to get a cross into the box where Steven Gordon was waiting, but he somehow put the ball wide. However on 72 minutes, Glentoran did find a third. A corner was met by Steven Gordon who made an effective run to the near post before powerfully heading home past Allen.

4 minutes later Curtis Allen netted his third of the day to all but secure a Glentoran win. Novo split the United defence with an inch perfect ball forward to Curtis Allen, who took a touch before firing past Allen to complete his hat trick.

Late on Owens saw a low drilled shot blocked by the Glentoran defence after a United corner before in added time substitute Conor McCloskey added a consolation goal. Kane tried his luck from a free kick over 40 yards out and Morris parried the ball into the path of McCloskey who easily scored from close range, however it did little to change a disappointing day for the Sky Blues.