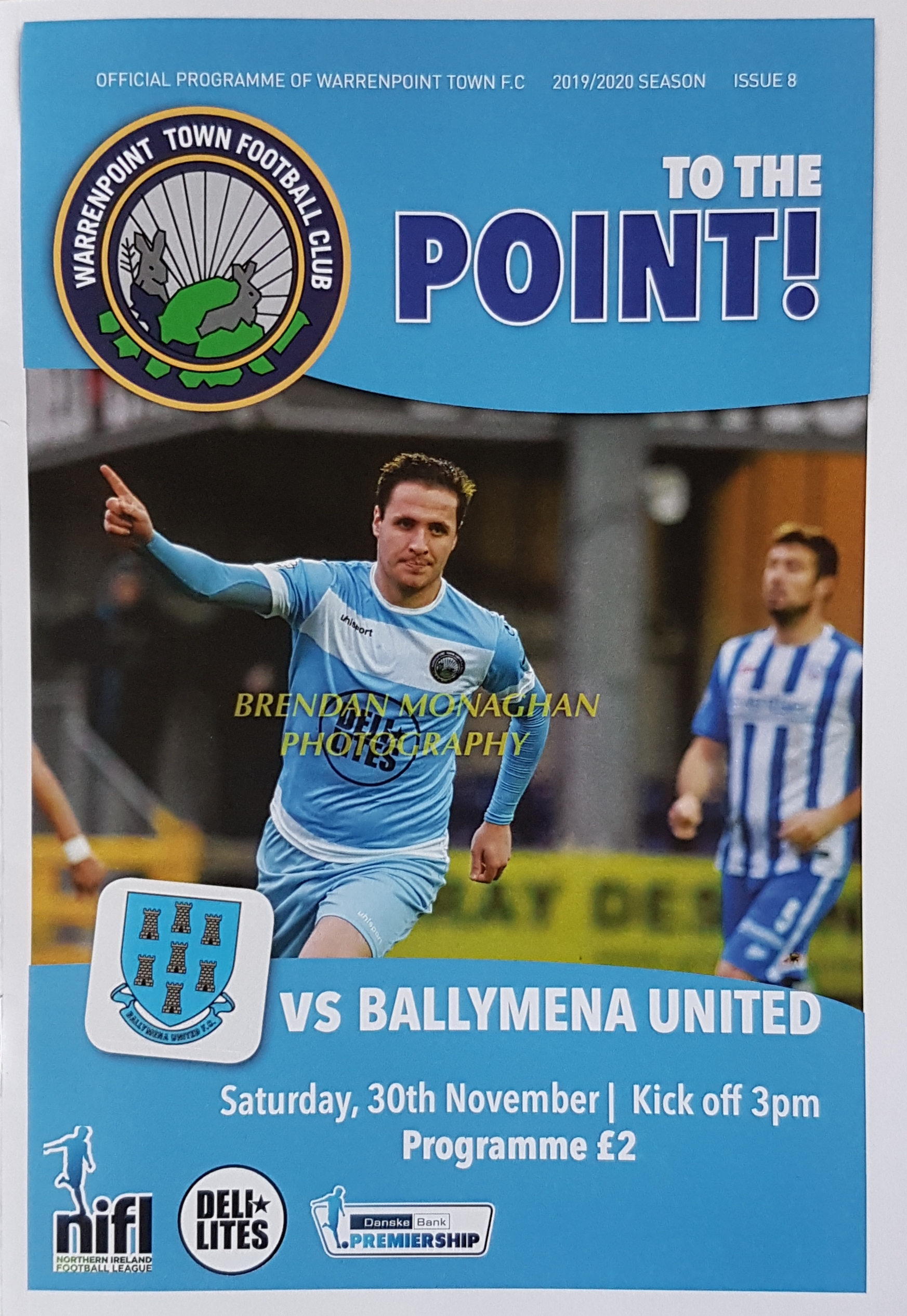 Ballymena United's dismal league form continued with a 2-1 defeat to bottom side Warrenpoint at the Q Radio Arena this afternoon.

It was United doing all the early running at Milltown and within three minutes a teasing free kick from Anthony Kane to the far post saw Mark Byrne deny Kofi Balmer. Andy McGrory was getting a lot of joy down the right hand side and after he was picked out by a great ball from Jim Ervin, McGrory's half volley drifted just wide, before Anthony Kane dipped an effort narrowly over from all of 35 yards.

On 23 minutes Warrenpoint went ahead with their first meaningful attack of the game. A free kick from the halfway line was floated into the box and only half cleared by Ross Glendinning, who punched the ball straight onto the head of Emmet Bennett, who looped a header over everyone and in from 18 yards out.

Lecky had the chance to hit back almost instantly for the Sky Blues when he was played in by Shane McGinty, but in a great position he blasted over goal and stand, and a minute later it was 2-0. The Point's talisman Alan O'Sullivan delightfully back-heeled the ball through two United players to set Brandon Doyle through, and he made no mistake in slotting low past Glendinning to leave The Braidmen in serious trouble.

Ballymena would've been thanking their lucky stars they didn't find themselves four behind when the hosts squandered two huge chances in consecutive minutes. First, Lorcan Forde went through one-on-one but a tame effort was saved by Glendinning. Shortly after, Deane Watters picked out Forde with a fine ball across the box and Forde had two chances from close range to bundle the ball home, but somehow the ball stayed out as first Glendinning, and then Tony Kane, kept the ball out on the line.
With 38 minutes gone United managed to pull one back as Anthony Kane scrambled the ball in from a corner. Kenny Kane met the corner but saw his header blocked. Jonny Addis couldn't turn the ball home but at the third attempt it was Tony Kane who squeezed the ball in to make it 2-1 at the break.

As expected Ballymena had the vast bulk of possession in the second half as they chased an equaliser against the league's bottom side, but the lack of chances throughout the half will be huge cause for concern. Warrenpoint found themselves with the first chance of the half as the dangerous Forde toyed with United's defence before forcing Glendinning to push a shot wide. At the other end a cross from McGrory was too high for Kenny Kane to really do anything with, as he headed well over, but sadly that was almost as close as the visitors came to levelling.

As the game sailed past the hour mark United were reduced to long balls from their own half, with the vast majority coming to nothing, as both defences had little to do. In an effort to spark some life into the game David Jeffrey introduced Ryan Mayse and Ross Lavery for Kenny Kane and Knowles, who'd made his first start since February. Addis had a decent chance from a free kick when he found himself in space but poked the ball over, before the same man rifled a shot from 25 yards with ten minutes left, with Byrne making his first save of the half to keep it out.

Anton Reilly was in the right place at the right time to prevent a cross from McGrory making its way to Mayse in the 6 yard box, but in truth the Point defence was rarely troubled late on and it was the hosts who should've found the game's fourth goal. A last ditch challenge from Balmer denied Doyle with five minutes to go, before Warrenpoint rattled the woodwork twice in added time. O'Sullivan broke on the counter and instead of going to the corner found Doyle who hit the crossbar, and not long after Bennett almost scored his second as he hit the post from distance.

That was to be the last chance of the game as Ballymena fell to yet another defeat, with this arguably the lowest point of them all for the fans who made the long journey down.