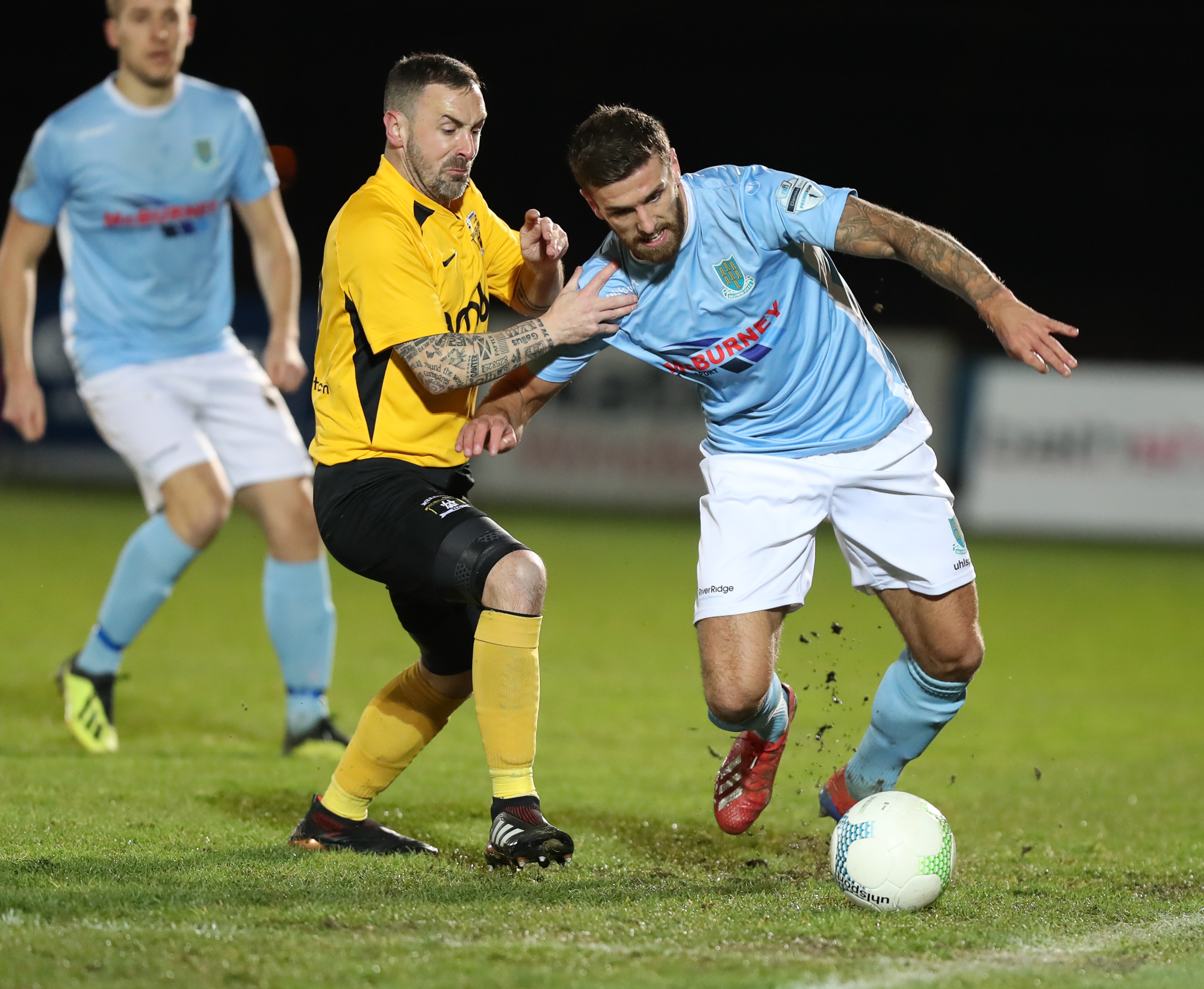 Adam Lecky netted a hat-trick as Ballymena United set up a Toals Co. Antrim Shield Final showdown against Cliftonville with a 4-0 win over Harland & Wolff Welders at the Showgrounds.

United made two changes to the starting line up that took on Cliftonville at Solitude on Saturday, with Adam Lecky returning from suspension to replace the injured Ryan Mayse, whilst Jordan Williamson made his regular cup appearance in goals.

The Welders started well in the opening couple of minutes, but from there on in it was the hosts who saw the vast majority of possession and chances. A couple of half chances passed Ballymena by 5 minutes in when first a Steven McCullough corner narrowly missed the head of the arriving Declan Carville and seconds later Lecky headed wide from a Jude Winchester cross.

11 minutes in The Braidmen moved in front through the returning Adam Lecky. Winchester picked the ball up on the edge of the box before being brought down, but when the ball fell kindly for Lecky referee Tony Clarke played a good advantage and Lecky did the rest, turning and advancing into the box before firing home into the far, bottom corner.

The visitors' first chance came shortly after United's goal when Ross Arthurs had time to cross for Matthew Ferguson, but he turned his near post effort wide. From there a string of home chances came with United seeing more of the ball than they have in probably any other game this season. Andy McGrory dropped a fantastic cross into the 6 yard box for Kenny Kane who couldn't quite turn it goalwards, with Lewis Harrison mopping up the following danger. Less than a minute later Winchester skimmed the top of the crossbar from distance, before Carville went close with a header.

On 25 minutes United, and Adam Lecky, doubled their goal tally. McCullough outmuscled David Graham on the touchline near the Welders' bench, who felt they should've had a free kick, but as play continued McCullough swung in a delightful ball for Lecky who finished first time with a little help from the post.

Just 2 minutes later it was 3-0. A one-two between Shane McGinty and McGrory looked to have ran too far, but a mix up between The Welders' goalkeeper and defenders saw the ball land at the feet of Shane McGinty who tapped home into an empty goal. The Championship side had a couple of half chances prior to the break, before Williamson, who had been a spectator for most of the half, was called into action to make a good save to deny Ryan Deans from 20 yards out, as a comfortable half ended 3-0.
The Sky Blues made a half-time change with Carville making way for Tony Kane, who came on for his first game in two months following a long injury lay off. Just 6 minutes into the half Ballymena had their fourth as Adam Lecky marked his return with a hat-trick. Kenny Kane put in an inch perfect cross from the left hand side and found Lecky who rose high to power a header home past Ryan Miskelly.

More Ballymena chances followed the fourth with McGinty bringing the ball down well on his chest and curling one wide before a rasping Winchester shot from 25 yards was well stopped by Miskelly. For 10 or 15 minutes in and around the hour mark The Welders had their best spell of the game, with a couple of threatening crosses forcing Williamson to come and gather. The 'keeper also did well to keep hold of a header from Arthurs after he was well found by Charlie Dornan.

The Braidmen continued to probe themselves for a fifth and missed two great chances in quick succession. The first came when Andrew Burns found Winchester who broke the offside trap, but running through one on one he saw his shot drift inches wide. Not long after Tony Kane picked out McGrory with a terrific ball but on the slide McGrory fired over. Lecky went extremely close to adding to his tally for the night before being replaced by Ross Lavery, while Reece Glendinning made his long, long awaited return from injury in place of Burns.

Inside the final 5 minutes and with a clean sheet to keep intact, Jim Ervin made a good block to deny Adam Wright. A fairly mundane last few minutes saw United cruise through with a 4-0 win to book their place in the final, which is provisionally scheduled to take place on Tuesday 21st January 2020.