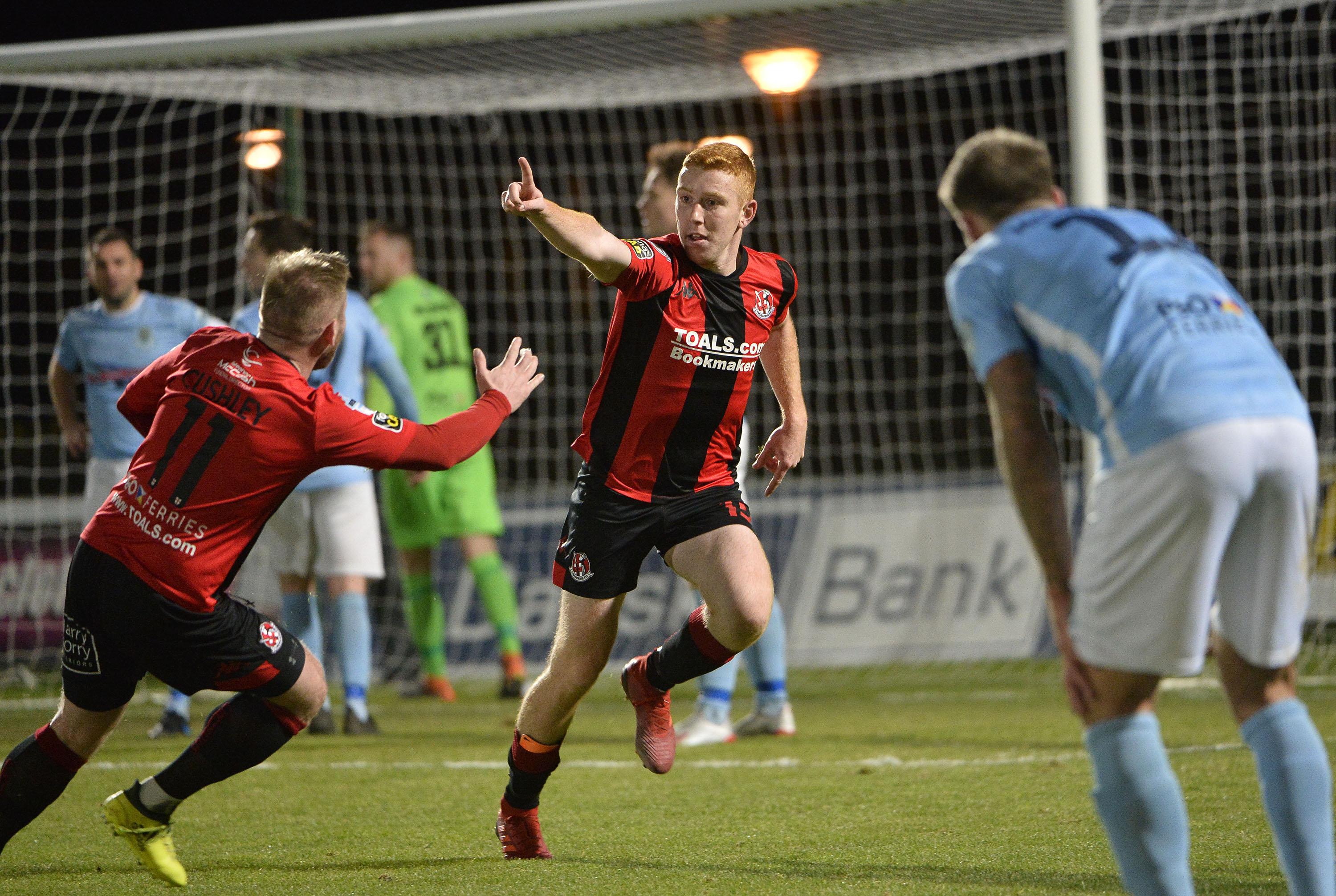 Ballymena United's hunt for a fourth straight BetMcLean League Cup final appearance ended with a 2-1 defeat to Crusaders after extra time in the quarter-finals this evening.

United made four changes to the side that lost 3-1 at The Oval on Friday night, including a change in goal with Jordan Williamson, the hero from the last time these sides met, starting. There was a also the welcome return of Adam Lecky after his length injury lay off, as he replaced Cathair Friel.
It was an evenly matched and end to end start to proceedings at Warden Street, with Ballymena looking more like themselves going forward, but the first good chance came Crusaders' way.

Kyle Owens picked out Paul Heatley in the box with a lovely ball, but Heatley failed to make any real connection on the ball and Williamson easily gathered. Shortly afterwards Declan Caddell raced clear on goal but a weak attempt was straight at Williamson. By way of early Sky Blue chances they came via long range efforts from Kofi Balmer and Jonny Addis; the former's effort was blocked and the latter's flew just wide.

The hosts suffered an early blow when Ryan Harpur was forced off through injury, replaced by Declan Carville. A shedload of United chances came just before the 20 minute mark, all involving Lecky who was running the show. A delightful high through ball from Lecky almost dropped for Kenny Kane, with Sean O'Neill out just that bit quicker to save, before Lecky teed himself up beautifully and forced a good save out of O'Neill from his half volley. A minute later Leroy Millar called O'Neill into action with another good stop and Lecky's thumping rebound from all of 25 yards went inches wide. No goal from the hosts, but plenty to admire.

After the frantic opening 25 minutes, the tie settled down but despite little by way of chances, both teams were knocking the ball about well, and the deadlock was broken 6 minutes before the break by the visitors. The Braidmen couldn't quite fully clear their lines from a long ball forward and it dropped for Jamie McGonigle 20 yards out, with the Crues' frontman firing a well hit effort past Williamson who had no chance.

Just before half-time McGonigle flicked a free header wide and Millar tested O'Neill with a low effort, as a good half from Ballymena saw then unfortunate to be trailing.

Ballymena made the perfect start to the second half, drawing level just four minutes in, from the penalty spot. It was a double whammy for Crusaders as Rory Hale handled the ball on the line from a Carville header, resulting in a straight red card for Hale as well as the spot kick. Andrew McGrory took the penalty and send O'Neill the wrong way to make it 1-1.

A man to the good and buoyed on by the equaliser, United began to dominate the game and went close to going ahead first from Carville and then Lecky. There was more injury worry for United 20 minutes from time when Millar couldn't continue and was replaced by Aaron Burns, another player making a return from a spell on the side-lines. Despite it being mostly Ballymena, a mistake from Carville allowed McGonigle to run the length of the half with the ball, but one on one with Williamson his poor effort was easily saved. Straight down the other end Josh Kelly had a good chance from close range, but was denied by O'Neill.

With 7 minutes left all of United's almost constant pressure was gifted away when Lecky received a needless straight red for lashing out at Philip Lowry off the ball, after he'd been denied what looked a certain free kick. A melee ensued in which Jim Ervin was booked. With the game now levelled up at 10 v 10 it was the away side who finished normal time on the front foot, but they couldn't find a way through as the 90 minutes ended level.

In the first 15 minutes sub David Cushley was denied by Williamson from a low curling effort and Heatley had the ball in the back of the net, but was flagged for offside. In the second half of extra time a couple of half chances came and went for United, but at the other end Cushley continued to cause problems. He sent a strong effort down the throat of Williamson before finding fellow sub Matthew Clarke, who danced through Ballymena's defence but was thwarted by a good save from Williamson.

With 1 minute left till penalties it was heartbreak for the hosts as Crusaders scored thanks to Jarlath O'Rourke. Cushley found Clarke who cut back a low ball into the box from the by-line and O'Rourke was there to slide in and put the ball into the bottom corner to send Crusaders through.

A hard one for Ballymena to take after a much needed step up in performance, but it's the Skies left wondering what might have been if not for Lecky's red card.