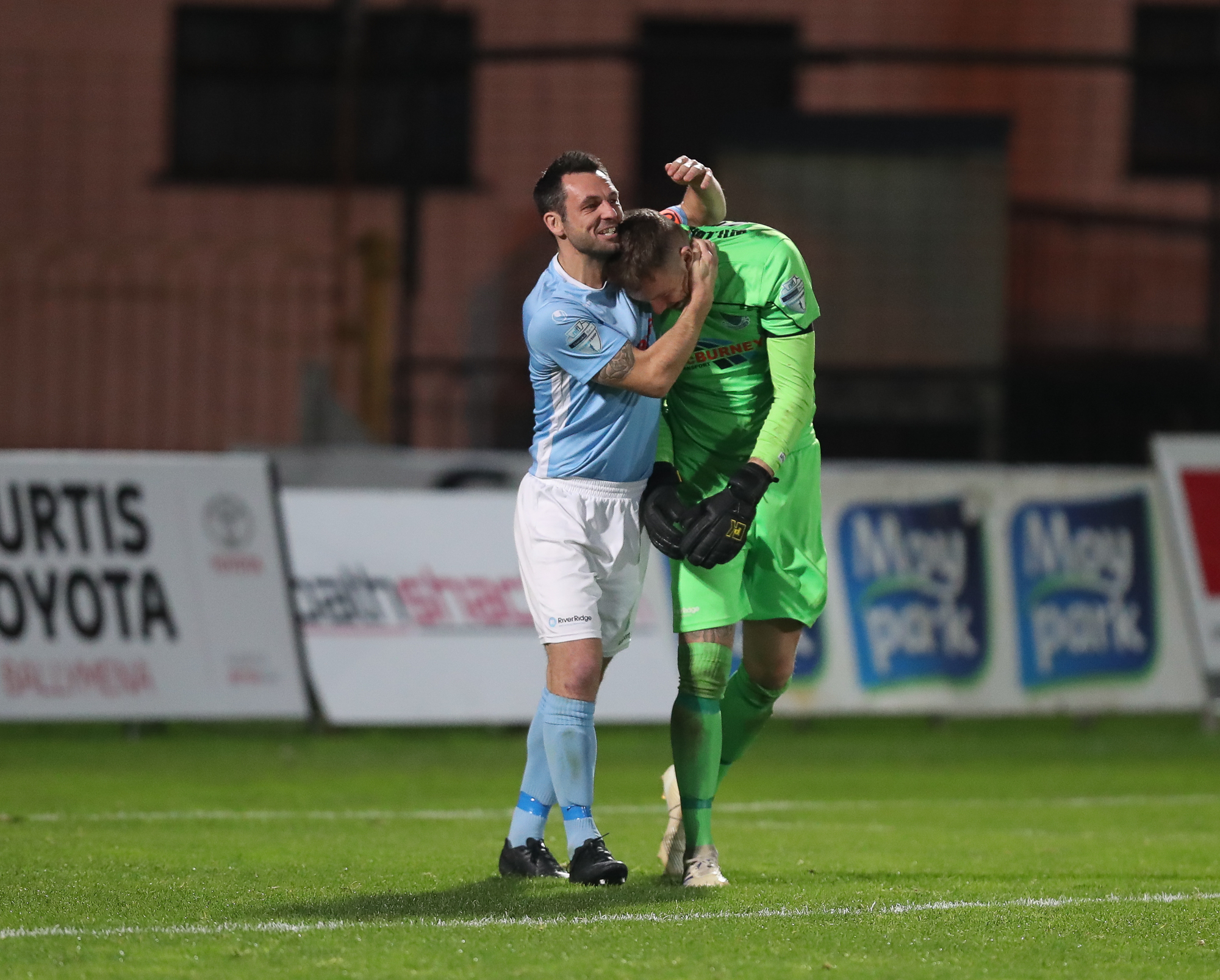 Jordan Williamson was the hero as his two saves in a penalty shootout saw Ballymena United put Crusaders out of the Toals Co. Antrim Shield, after the game had finished 1-1 AET at The Showgrounds.

Both sides made a number of changes to the starting XI's fielded for Saturday's 1-1 draw in the league, with Cathair Friel making his first start in nearly a month.

The teams traded early efforts with Declan Caddell firing straight at Jordan Williamson and Scot Whiteside heading a Ryan Mayse cross just wide at the other end, before the deadlock was broken on 12 minutes. After United took a quick free kick, Josh Kelly found Shane McGinty in space and he did the rest, drifting past Sean Ward before unleashing an unstoppable shot from the edge of the box into the top corner past a static Sean O'Neill.

After the opener, the play remained as even as it had been prior to McGinty's goal. A low cross from Michael Ruddy deflected into the path of Jamie McGonigle, who shot wide on the turn, but on 32 minutes the visitors equalised. Ruddy found David Cushley in the box from a throw in and he quickly turned before firing his effort into the far top corner over Williamson, who had no chance. A screamer apiece for both sides goals.

Cushley, no stranger to a goal from near the halfway line at The Showgrounds, tried his luck from there again three minutes after his goal and his audacious effort forced Williamson to have to turn it wide. After going through a period of Crusaders pressure Ballymena almost went in front again before the break. McGinty was cleaned by Ruddy 20 yards from goal, but Raymond Crangle played a good advantage and from it Ross Lavery struck the post from a shot at the corner of the box, as a decent half ended level.

The start of the second half was more about potential chances cut out by defenders rather than chances created, the most notable being a cross from Friel that was destined to be headed home by Kelly, only for Rodney Brown's timely headed clearance. The first effort of the half came on 57 minutes when Andrew Burns found Lavery and after the ball sat up nicely for him, he saw a shot drift wide from distance. As an end to end half continued Cushley shot straight at Williamson and seconds later at the other end a cross in from McGinty missed the head of Friel by inches.

With extra time looming Ronan Hale shot straight at Williamson before the Sky Blues looked like they might have a chance to win it when Mayse put through Friel with a great ball, but going away from goal Friel's tame effort was simple for O'Neill, as the 90 minutes ended level.

The first chance of extra time fell the way of the away side as Cushley saw an effort from a corner blocked, before Caddell headed wide from close range. Minutes later Ross Clarke took everyone by surprise by shooting from a deep free kick which looked a certainty to be crossed into the box, and Williamson did well to react quickly and tip it over the crossbar. After navigating through another long period of Crusaders pressure, the Braidmen ended the half with Lavery shooting narrowly over as the first 10 minutes brought no goals.

United started the second half of extra time well and an inswinging corner from Mayse forced O'Neill to claw the ball off his line before Lavery dragged a shot into the side netting. With 3 minutes left Ballymena should've won the tie when sub Leroy Millar headed the ball across goal for Mayse, but from six yards out he completely missed the ball, spurning the chance and taking the game the penalties.

With the spot kicks taken at the Town End, Owens and Hale missed two of Crusaders' first three penalties, allowing Ballymena to go 3-1 up, before McCullough and Friel missed for United. It all meant Clarke had to score the last penalty to extend the shootout, but he was denied by Williamson who saved his second penalty to send Ballymena into the semi-finals with a 3-2 win on penalties.