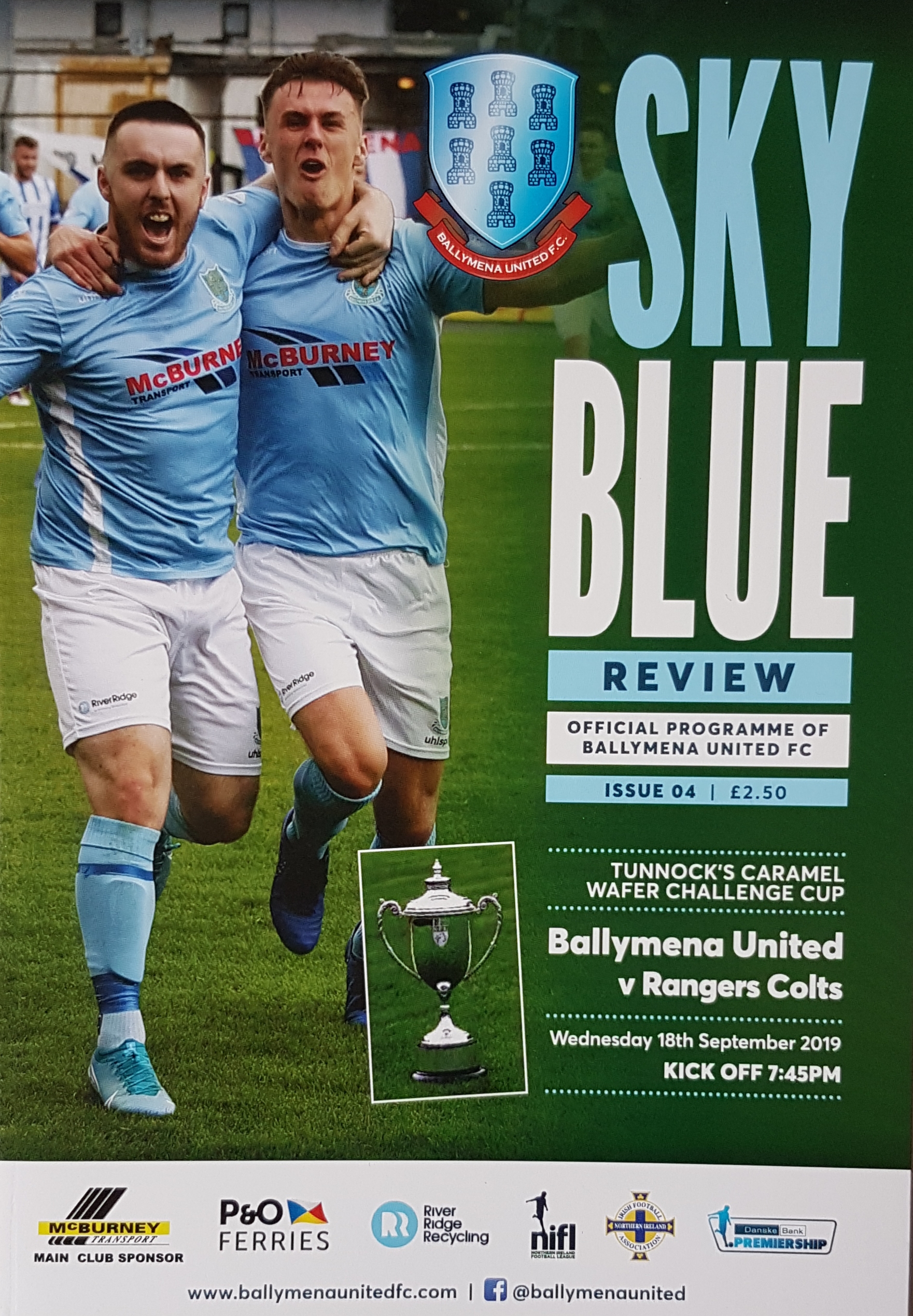 United, playing in the competition thanks to their 2nd place finish in last season's league, made a host of changes to take on a Rangers team including a few players with first team experience.

Prior to kick-off a minute's silence was held to mark the death of Rangers legend Fernando Ricksen who passed away this morning from Motor Neurone Disease aged just 43. A minute's applause was also held in the second minute, marking Ricksen's squad number at Ibrox.

Ballymena started the game well and a string of passes ended with Shane McGinty's ball across goal narrowly missing Josh Kelly in the middle. The visitor's first threatening move came on 11 minutes when Jamie Barjonas broke and found Nathan Patterson. His cross looked set to find Eros Grezda in the six yard box, but it was cut out by some typically fine defending from Jim Ervin.

A huge chance passed the Sky Blues by 16 minutes in when Ross Lavery did well to find Ryan Mayse, who saw his effort come back off the post, before Ryan Harpur couldn't sort his feet to stick the rebound home from close range. With the game still fairly even halfway through the first half, Jordan Williamson got down well to deny Adedapo Mebude after he'd been played through by Greg Docherty. Tony Kane went down injured off the ball before Mebude's chance and despite trying to carry on, it wasn't possible as he made way for Leroy Millar.

The Braidmen almost went ahead in fortuitous circumstances after 33 minutes when Kelly's intended cross went over the head of Gers 'keeper Kieran Wright and came back of the crossbar, before both sides traded chances late on in the half. First, Docherty turned neatly inside the box but saw his shot well saved by Williamson. At the other end Kelly narrowly headed over from a corner, as a tightly contested first half ended goalless.

A confrontational second half started quietly for both sides with neither registering a real chance until 8 minutes in. That chance came after Millar gave the ball away to Kai Kennedy in a dangerous position, but Kennedy was thwarted by Williamson. Shortly after Kennedy's chance McGinty showed great strength inside the box to tee up Ryan Mayse, but he rifled his effort agonisingly over the bar.

As the game started to open up chances began to flow at both ends and a well worked corner routine from Rangers ended with Williamson making a top drawer stop to tip a good effort from James Maxwell over, and minutes later Rangers sub Serge Atakayi fired over from close range. Inside the final 20 minutes United had two strong penalty appeals turned down as first McGinty, and then Millar, went down under challenges inside the box.

Despite Rangers creating more chances of note, Ballymena were looking marginally the better team, however they were let off when Grezda headed a good opening wide.

Declan Carville came on late for Ballymena and made an impact, including almost heading home, only to be denied by the slightest of touches on the ball by Wright. With the game to go straight to penalties if level after 90 minutes, that looked a strong possibility until Rangers scored 3 minutes from time. A long ball from Barjonas looked to be routinely dealt with by Jonny Addis, but a rare mistake from the centre half allowed Serge Atakayi through on goal and he calmly slotted the ball passed Williamson.

4 minutes of added time saw two chances for United to level and numerous confrontations between both sides which had been bubbling under for most of the game. Kofi Balmer and Mebude had clashes on various occasions and eventually ended with Balmer picking up a yellow.

In terms of those chances Addis flashed a shot over after a spot of pin ball, and with the last play of the game United 'keeper Williamson came up for a corner and almost did the unthinkable, with his header being cleared on the line by Rhys Breen.

The final whistle brought more flashpoints that forced Rangers manager Graeme Murty and assistant Peter Lovenkrands to come onto the pitch to take a couple of Rangers livewire's out of the action, as United bowed out of the Scottish Challenge Cup at the first hurdle.