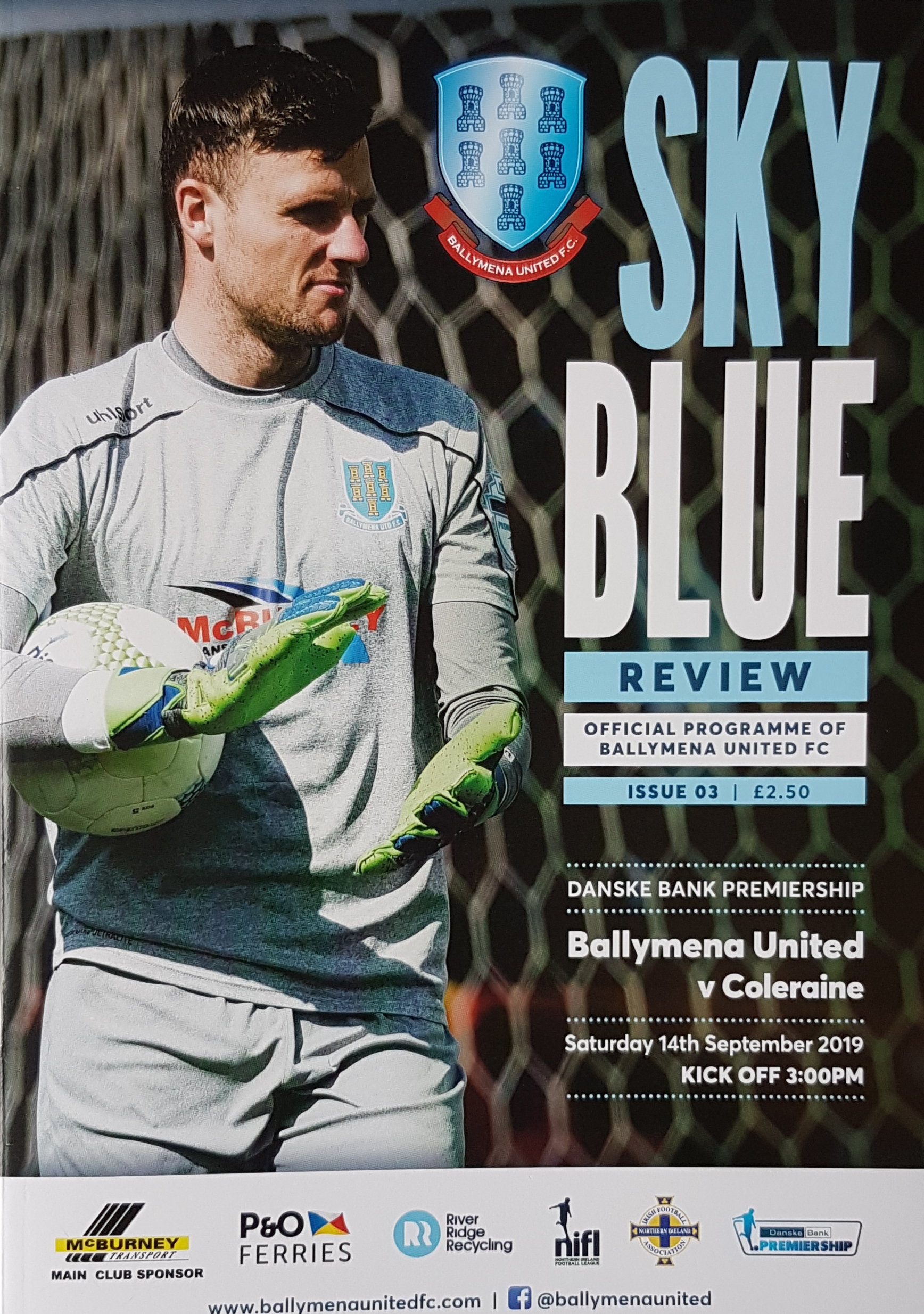 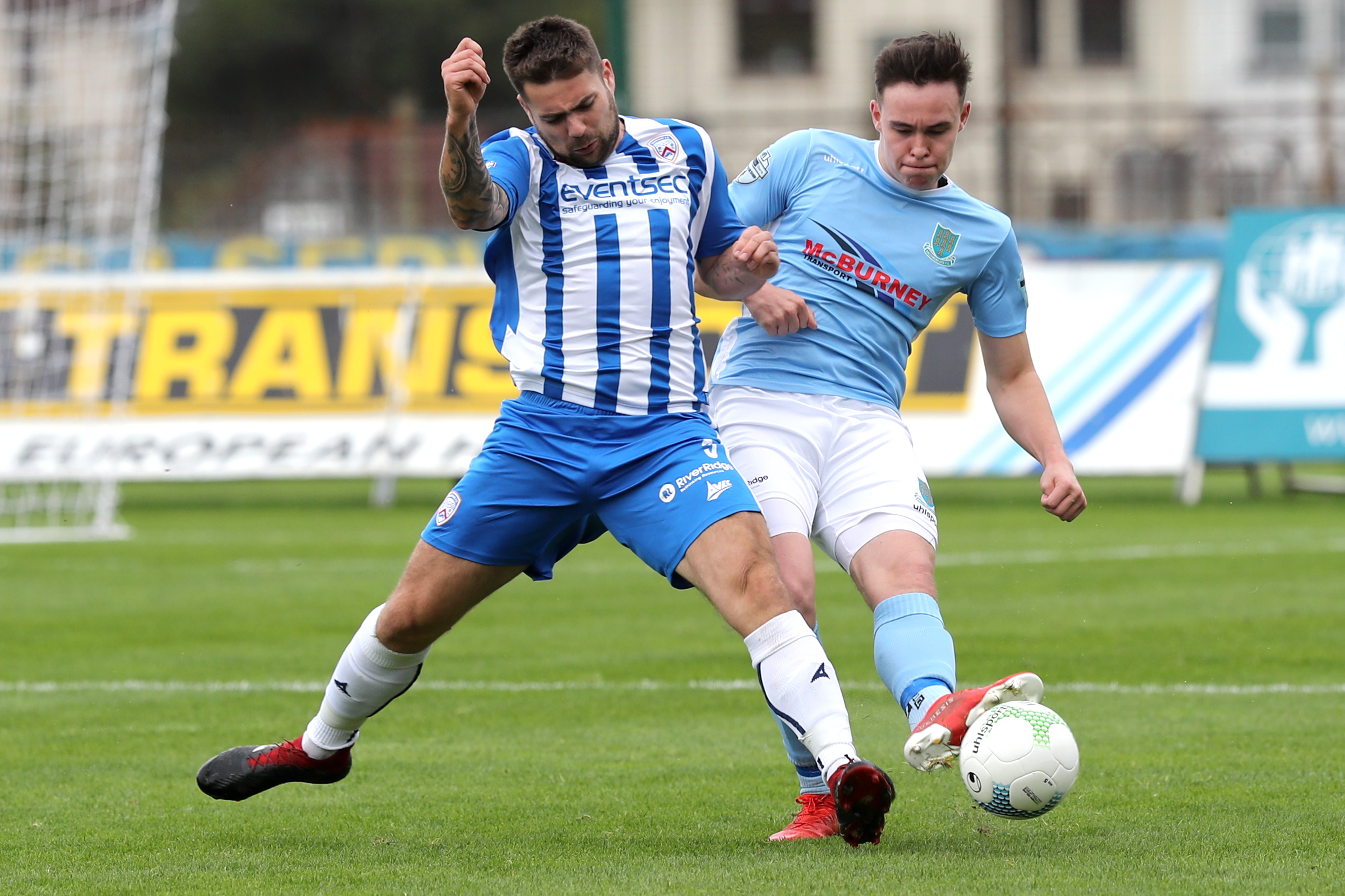 A dominant Ballymena United had to settle for a point against 9-man Coleraine after a 1-1 draw at the Showgrounds on Saturday afternoon.

An injury to Jude Winchester and suspension for Andrew Burns meant two changes from United's last league game, as Declan Carville came in and Kofi Balmer returned from international duty.

As quite often in these games, it was a bit of a cagey start to the action in front of two typically vocal sets of supporters, with neither side able to gain a foothold. The game was sparked into life on 13 minutes when the visitors took the lead through the in-form James McLaughlin. After a long throw-in, the ball fell to Eoin Bradley and he put it across goal for James McLaughlin, who had the easiest of finishes to make it 1-0.

A couple of minutes after the goal Coleraine skipper Stephen O'Donnell was booked for a foul on Cathair Friel, the second booking of the game inside 15 minutes. Bar a couple of dangerous looking crosses coming and going for Ballymena, neither team really looked like threatening until the 27th minute when the Bannsiders should've made it 2-0. Bradley beat United's offside trap to race clear on goal, but baring down on Ross Glendinning he opted to lay it off for McLaughlin, who pulled up before getting to the ball as the chance went begging. McLaughlin couldn't continue and was replaced by Nedas Maciulaitis.

The last 15 minutes of the half were mostly played in the Coleraine half as Ballymena probed for an equaliser. A nice one-two between Aaron Burns and Leroy Millar allowed the latter a shot on goal, but it was well blocked by O'Donnell before Andy McGrory blasted over. With 8 minutes left in the first half Coleraine were reduced to ten men when O'Donnell received a second yellow after catching Burns with a high boot.

Right on half-time Ballymena added to Coleraine's problems as the Braidmen levelled after a period of pressure. A corner in from McGrory was met at the back post by Scot Whiteside, who headed home his first of the season to level the game at the break.

Ballymena made a tactical switch at the break on the back off having the extra man, with Balmer making way for Ryan Mayse. The Sky Blues strung together a tidy move to get the second half underway. Cathair Friel broke from United's half and found Mayse, who found Burns, who found Friel again, but his first time shot drifted well wide. Coleraine may not have had much of the ball in the Ballymena half at the start of the second half, but on the hour mark Glendinning was called into action to keep out Aaron Jarvis at the back post from a free kick.

Ballymena's second change saw Shane McGinty replace Carville who was on a yellow, and McGinty was in the thick of the action straight away. A good move involving Mayse and Friel ended with McGinty getting a shot away and despite a deflection taking his effort wide, a goal kick was given. On 65 minutes the now customary pantomine villain for Ballymena fans in this fixture, Bradley, missed a glorious chance to put Coleraine back in front. A slack pass from Whiteside gave the ball to Jarvis who played in Bradley, but one on one with Glendinning and with plenty of time to make his mind up on his finish, his effort was saved by Glendinning, with Bradley's follow up going wide.

The final 20 minutes on Warden Street were all Ballymena and in the space of five minutes three good chances fell United's way. First, McGrory had a free kick tipped over by Chris Johns before Mayse got on the end of a flick by McGinty but saw his close range effort saved. From the resulting corner the ex-Coleraine man Burns fired over from six yards under little pressure as a huge chance passed Ballymena by. After those chances Ballymena gave little concern to Johns in the Coleraine goal as a mixture of well organised defending from Coleraine and seemingly a lack of ideas from United saw a frustrating time for the hosts and home support.

With time running out for Ballymena to find a way through, Friel missed a massive chance at the beginning of extra time to give Ballymena the three points. Aaron Canning carelessly gave the ball away to Friel inside his own box, but with the whole ground waiting on Friel to find the net he somehow fired his effort wide. That would turn out to be the chance Ballymena would've been hoping for to win the game. It looked like sub Ross Lavery would get a chance to win it deep into added time as he looked to burst through on goal, but he was brought down by last man Adam Mullan, who consequently saw red.From the free kick McGrory could only find the wall before Mayse flashed the rebound wide, as a frustrated Ballymena had to settle for shared spoils in the first derby day of the season.