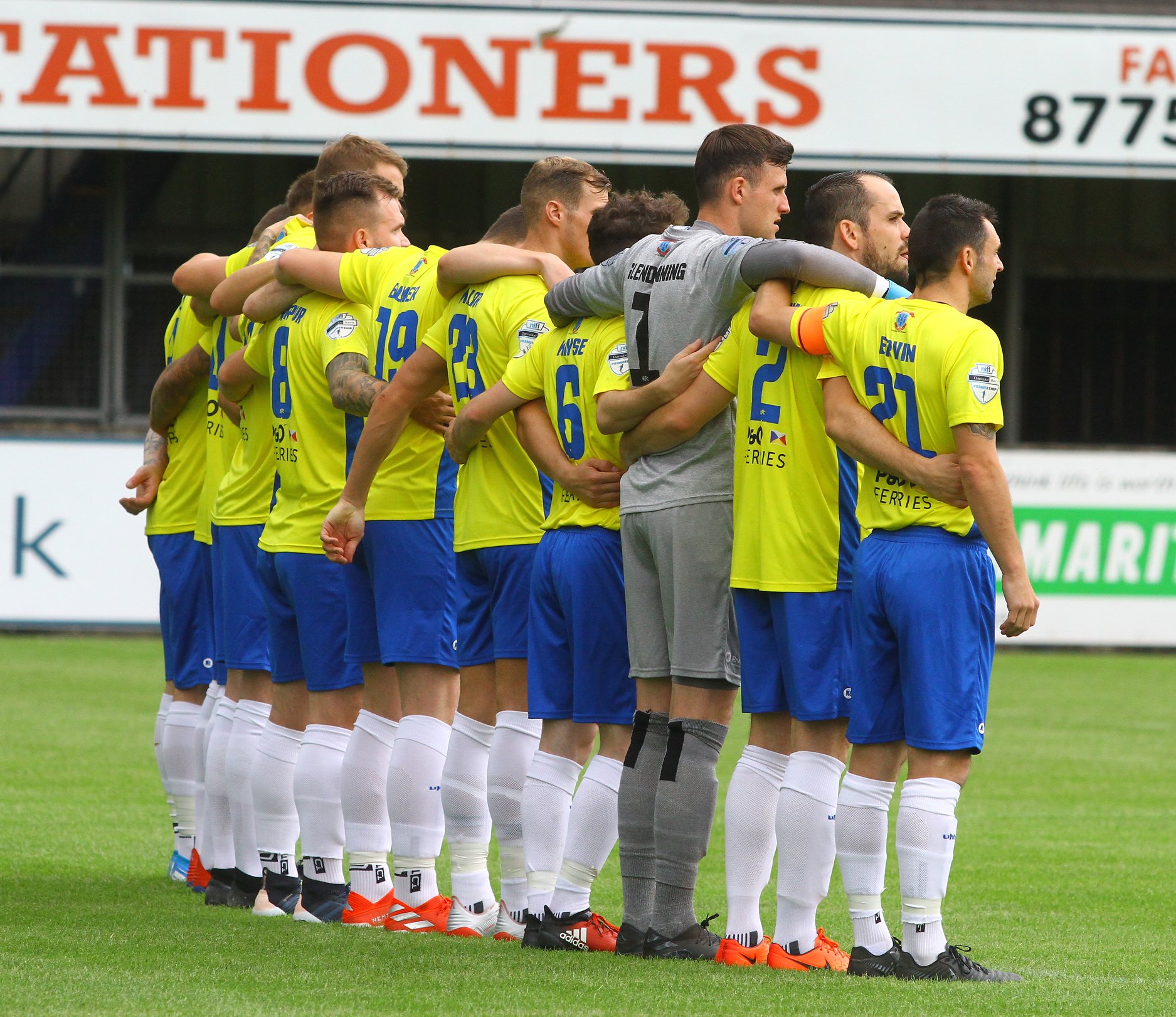 Ballymena United were pegged back twice at Stangmore Park as they opened the 2019/20 Danske Bank Premiership campaign with a 2-2 draw at Dungannon.

After a record breaking European run for United in July, it was back to league action with a season opener at The Swifts for the second straight season.

Before kick-off a minutes silence was held in hour of Irish League legend Tommy Breslin who passed away suddenly on Wednesday aged just 58.

The Sky Blues got off to a decent start with a couple of chances in the opening 10 minutes, as Jude Winchester headed wide a ball from Jonny Addis and Steven McCullough fired over on the half volley. After seeing out a couple of Dungannon attacks that didn't come to much, Ballymena took the lead on 15 minutes as Cathair Friel grabbed United's first league goal of the season. A miscued clearance from Swifts' stopper Sam Johnston landed at the feet of Ryan Harpur who found Friel, and he finished well into the bottom corner from the edge of the box.

5 minutes after the opener the hosts had their best chance of the half to level. A header from Ryan Waide eventually made its way to Michael Carvill, but Ross Glendinning was quick off his line to come out and smother Carvill's shot. As the half progressed the visitors were just shading it in terms of possession and missed a glorious chance to make it 2-0 through Leroy Millar. A nice passing move ended with Addis picking out Millar at the back post, but with the goal gaping Millar failed to get a good connection with a header that went wide.

Shortly after Millar's chance new Swifts signing Caomhan McGuinness was in the right place at the right time with a goal line clearance to prevent Addis tapping the ball home. Towards the end of the half Ryan Mayse almost scored a stunner on his old stomping ground, as he sailed an audacious, curling half volley just wide from the edge of the box as the half ended 1-0 to The Skies.

After controlling a good deal of the first half, Ballymena found themselves doing a lot more defensive work for the second half as Dungannon stepped it up. It took just 2 minutes after the restart for Dungannon to level through summer acquisition Waide. Kris Lowe fired a low ball into the box which was met by Waide. He teed up Oisin Smyth who saw his effort well saved by Glendinning, but Ryan Waide was there for an easy finish on the follow up.

Lowe was proving a real threat for Dungannon and again delivered a menacing ball into the Braidmen's box, this time finding the onrushing sub Rhyss Campbell, but Glendinning did well to hold his shot. After Glendinning was made to work again to keep a long range effort from Waide out, Mayse saw a second goal disallowed at the other end. Sub Ross Lavery played in Mayse who rounded the 'keeper and found the net, only to be flagged for offside.

With Ballymena struggling to create any real clear cut chances it looked like the game was heading for a 1-1 draw before a frantic final 5 minutes produced two goals. On 88 minutes Ross Lavery looked to have won it for United when he scored a delightful free kick, bending it low and past the wall from 25 yards.

However it wasn't to be the winner. Just as the board went up for 3 additional minutes, Lavery conceded a penalty at the other end, bringing down Campbell just inside the box. Swifts' skipper Seanan Clucas stepped up and sent Glendinning to wrong way to snatch a point for Dungannon, a result that was more than fair on the balance of play.