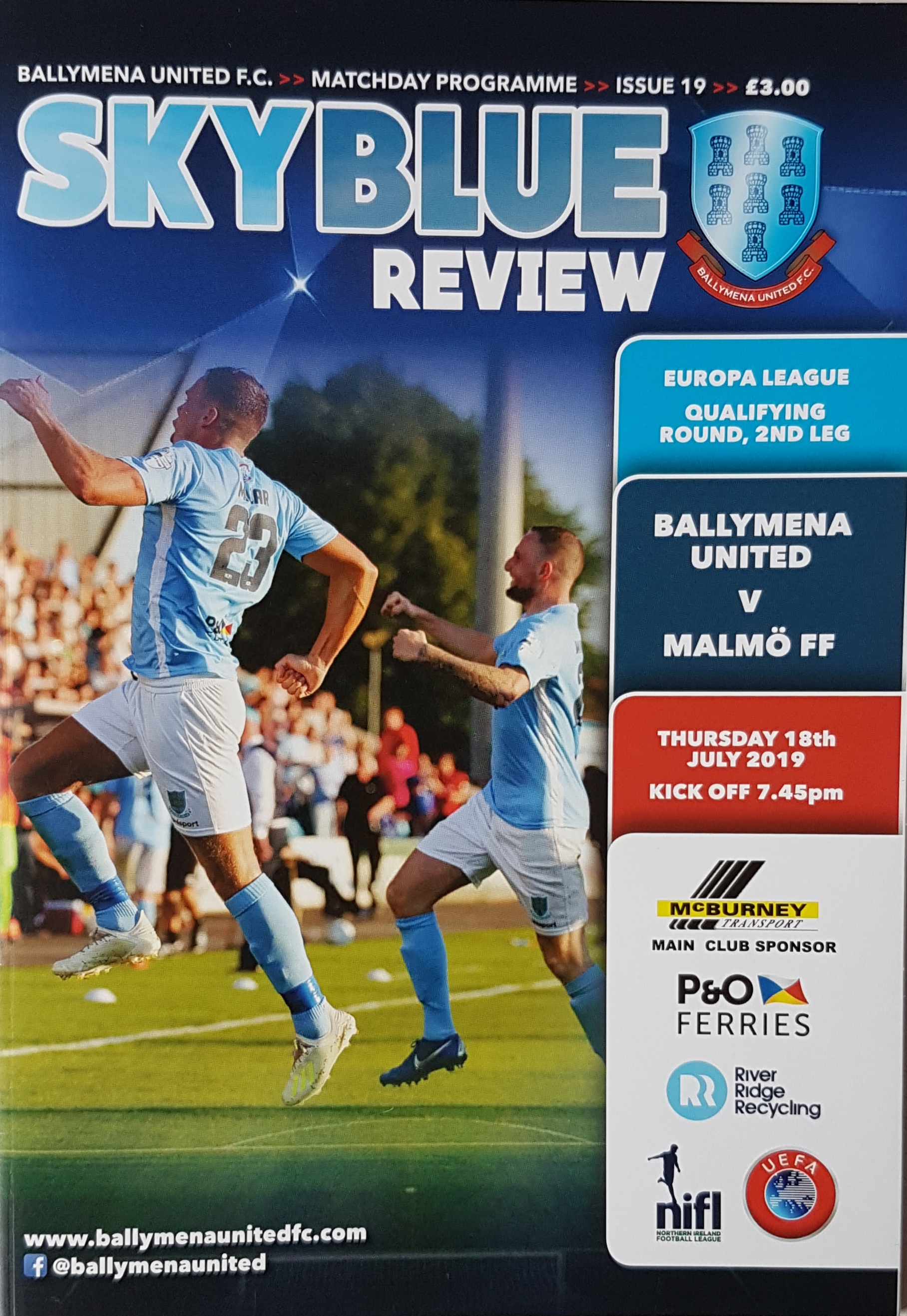 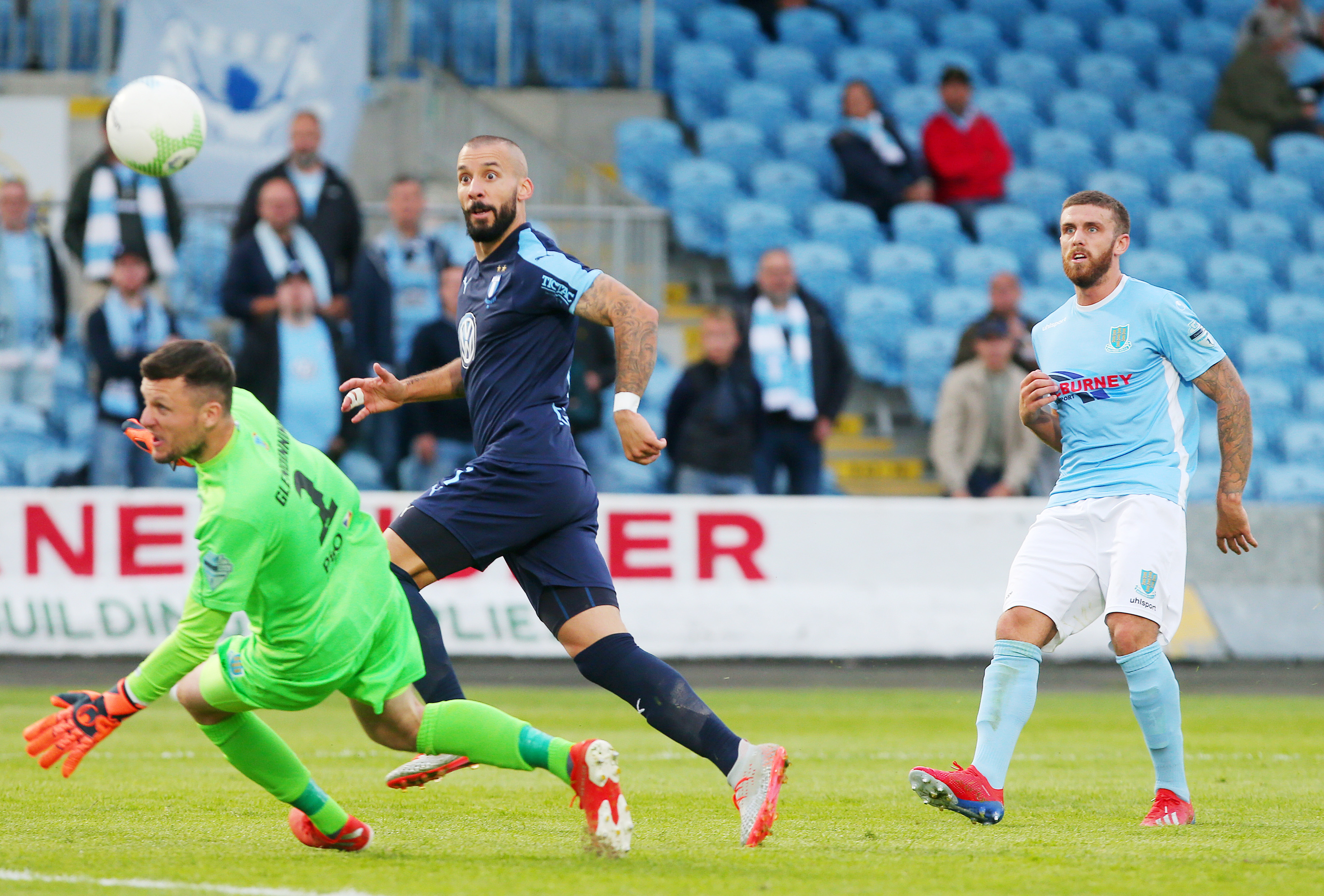 BALLYMENA United's European adventure came to an end tonight with a 4-0 defeat at home to Malmo FF, the tie ending 11-0 on aggregate.

United were playing for pride at The Showgrounds after last Thursday's 7-0 defeat to the Swedish giants at The Swedbank Stadion, with changes aplenty for both teams in the starting XI's.

Ballymena made a bright start to the game at a sunny Warden Street but the first chance fell to Malmo's Erdal Rakip, as he dipped an effort just wide. On 14 minutes quick feet from Shane McGinty won Ballymena a free kick 25 yards out, with Andy McGrory sending the set piece narrowly wide. After that free kick the Braidmen enjoyed a sustained spell in and around the Malmo box, with Jonny Addis in particular impressing with numerous runs from defence in his first game of the season. Kofi Balmer played in Ryan Mayse who hit the post, however Mayse was flagged for offside anyway. Shortly afterwards Adam Lecky narrowly missed a whipped ball in from Steven McCullough before Malmo 'keeper Dusan Melicharek did well to take the ball off the foot of McGrory after a fine long ball pass from McGinty.

Following Ballymena's run of half chances, the visitors settled back into their expected dominance and on 27 minutes broke the deadlock with a stunning opener. United dealt with two ball's into their box but could do nothing when captain Behrang Safari unleashed an unstoppable half volley from 30 yards into the top corner. A goal that had both sets of supporters applauding the strike.

For the remainder of the half Malmo continued to control things but were almost caught out by a cross from McCullough which Melicharek had to put out for a corner, as the Sky Blues headed into half-time just the one behind after a good showing.
Ross Glendinning was called into action soon after the restart to keep out Romain Gall from 12 yards out, and with 5 minutes gone in the half Ballymena threatened themselves. McGinty and Lecky combined to tee up Mayse, but slightly off balance he could only fire wide.

Within a minute of Mayse's chance Oscar Lewicki missed a glorious opening from 6 yards out to double Malmo's lead, but a minute later Uwe Rosler's men did find a second through Guillermo Molins. In a move that was past the hosts before they'd time to react, Gall played in Molins who lifted the ball over Glendinning and into the goal.

As the Allsvenskan leaders probed for more, first Andrew Burns, and then Glendinning, had to help keep out Marcus Antonsson. On 55 minutes the game was halted for almost 5 minutes in comical fashion when a sprinkler was activated at the side of the pitch, with 'keeper Melicharek even trying to resolve matters himself, before the situation was finally ended to a roar of approval of both sets of fans.

Following a quiet spell in the game after the light relief from the sprinkler, Malmo made it 10-0 on aggregate on 68 minutes. Gall slid in Rakip, and one on one he placed the ball past Glendinning and into the goal via the post.

In the final 15 minutes competitive debut's were handed to Ross Lavery and Josh Kelly, before Malmo grabbed a fourth from the penalty spot. Much to the confusion of most of the ground, Finnish referee Kaarlo Oskari Hamalainen seemed to spot an offence in the box, much to the disbelief of those in Sky Blue. Gall stepped up and calmly slotted home the penalty for 4-0.

In the closing stages the game threatened to turn nasty with a few confrontations scattered all over the pitch, resulting in bookings for Malmo's Bonke Innoncent, plus Mayse and sub Cathair Friel. In amongst the disagreements, McGinty missed the best chance of the game to give Ballymena a much sought after goal, Kelly bursting clear, cutting the ball back to McGinty who seen his shot saved.

The game ended 4-0 on the night, 11-0 on aggregate, with both teams given a great reception leaving the pitch, as United bowed out of a historic Europa League run.