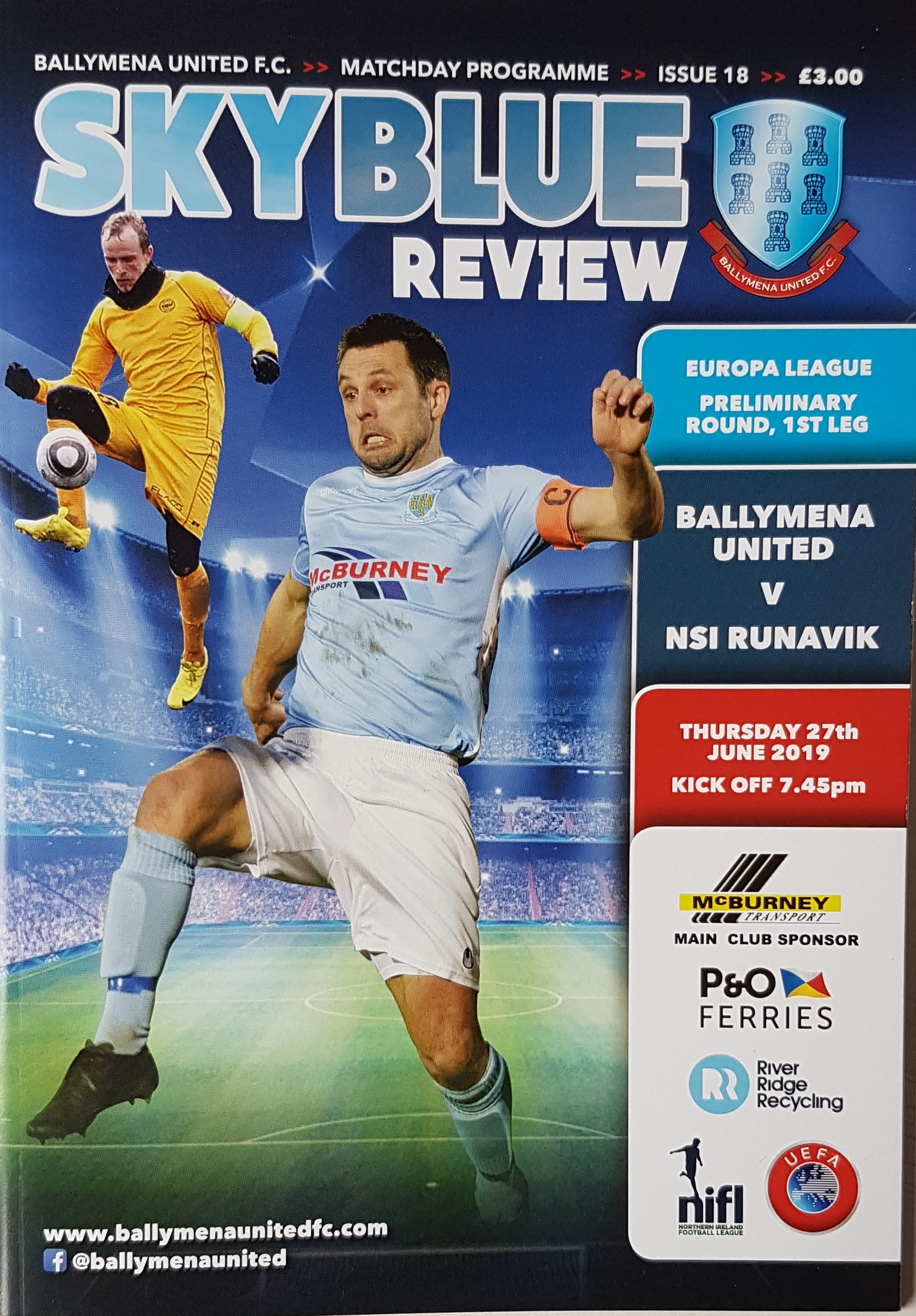 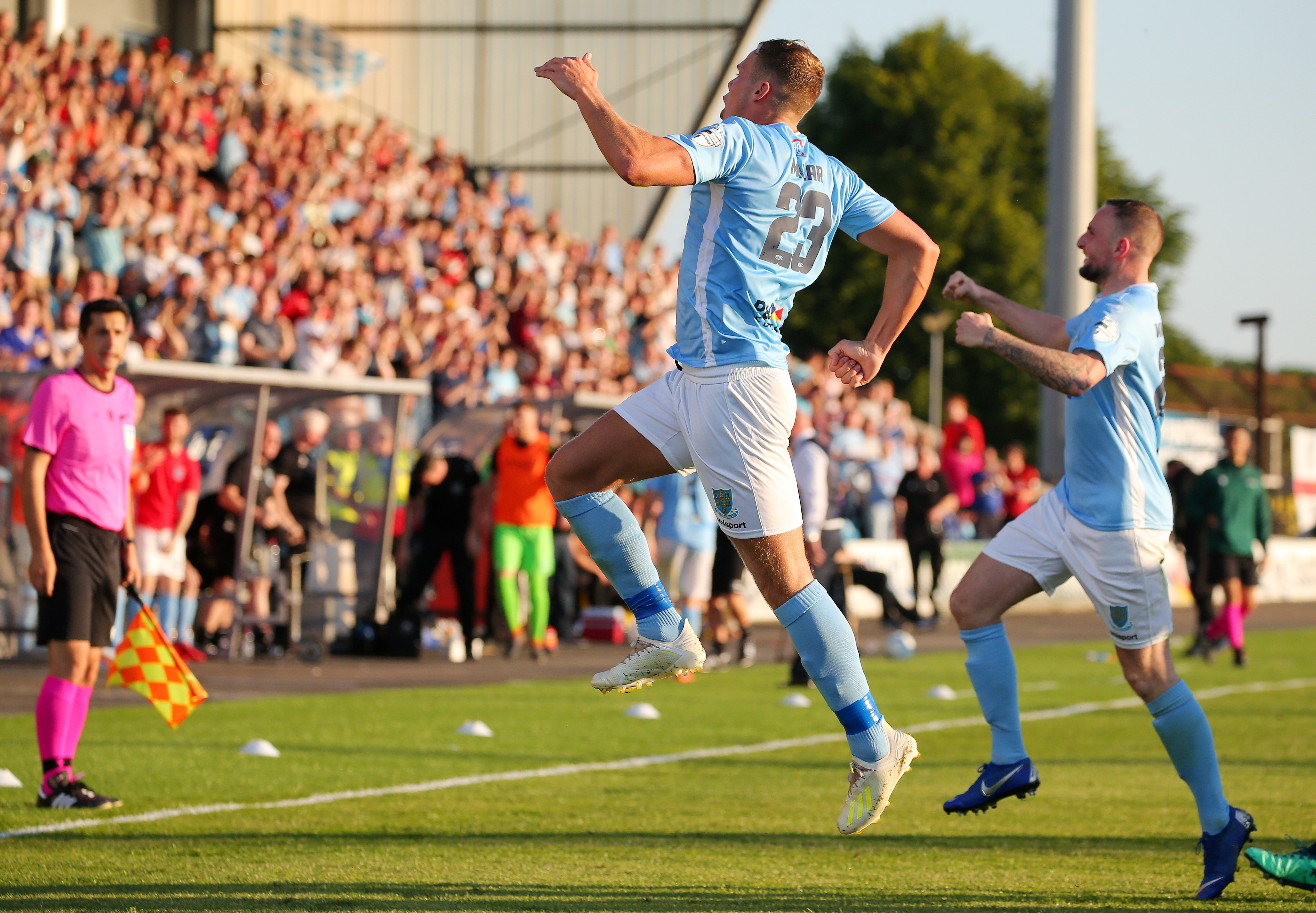 BALLYMENA United got their Europa League campaign off to a great start, beating Faroese side NSI Runavik 2-0 at home in the first leg of their preliminary round tie.

A 2,270 strong crowd watched United take on their counterparts from the Faroe Islands in the first European game at The Showgrounds for 15 years. New signing Declan Carville made his first competitive appearance for the club, with other summer acquisitions Ross Lavery and Joshua Kelly settling for places on the bench.

The visitors made a bright start to the game for their commendable visiting supporters with Peder Nersveen and Petur Knudsen both firing over in the early stages. The Sky Blues' first opening came on the 10 minute mark when a Jude Winchester shot found its way to Cathair Friel, but he was denied by a fine block from Per Langgaard. 2 minutes later Runavik 'keeper Tordur Thomsen was called into action to keep out Adam Lecky, with the resulting corner headed over by Lecky himself.

Ross Glendinning's first piece of work came 15 minutes in. After spilling a cross, Glendinning redeemed himself by tipping Knudsen's dangerous effort over the crossbar. The second half of the first 45 minutes was played largely in the Runavik half as the hosts probed to break the deadlock. A fantastic team move from the Braidmen, beginning on the edge of their own box, ended with Leroy Millar teeing up Winchester, but he could only blaze his effort over.

Ballymena had a case for a penalty waved away on 27 minutes by Greek referee Athanasios Tzilos when Lecky went down under a challenge from Johan Davidsen inside the box. Towards the end of the half Friel fired a long range effort straight at Thomsen, before the goalkeeper pulled off a great save to stop Millar, after he'd been picked out brilliantly by Winchester, as a good half's work from United saw them go into the break at 0-0.

Ballymena came out strongly for the second half and just 4 minutes in found the game's opener. A cross eventually made its way to Friel who knocked down a header into the path of Millar, and the Cullybackey man made no mistake with a composed finish past Thomsen. Millar's strike was Ballymena's first goal in Europe since 1984, when George Beattie found the net against Hamrun Spartans.

Runavik almost hit back instantly when Bardur Hansen's cross nearly fell for captain Klaemint Olsen, but Scot Whiteside was on hand to make a timely interception.

After a 35 year for a European goal, United fans were treated to two in just six minutes when Winchester made it 2-0 on 55 minutes. Kofi Balmer found Friel who then thought he had been fouled, but as the referee said no foul Winchester picked up the loose ball, taking one touch before curling a stunning effort from just inside the box into the top corner, giving Thomsen no chance in the Runavik goal. A cracking finish that Winchester's performance more than deserved.

A blossoming partnership between Winchester and Millar linked up again three minutes after the second goal, this time the latter seeing a low, angled effort kept out by Thomsen. With an away goal now pivotal for Runavik, they stepped up their pressure on United's defence as Glendinning pulled off a super save to keep the score at 2-0. Hansen was able to find Knudsen with a cutback in the box, but his attempt was wonderfully saved by Glendinning at close range, before Knudsen sent the follow up over.

After Winchester and Runavik sub Betuel Hansen traded shots at either end, Runavik were handed a great chance with 10 minutes left when Lecky conceded a free kick just outside the Ballymena box. Runavik's greatest goal threat on the night Knudsen took the free kick, but sent it just over Glendinning's bar. With 5 minutes left Millar missed a glorious opportunity to strengthen United's grip on the tie. Lecky picked out the scorer of the opener with an inch perfect cross to the back post, but with a diving header Millar couldn't keep his effort under the bar.

On 86 minutes there was a welcome return to action for Ryan Harpur, who missed most of last season's conclusion through injury, as he replaced Winchester. In the closing stages Lecky sent sub Ryan Mayse through on goal, but from an awkward angle he fired narrowly wide as the game ended 2-0, putting Ballymena in a strong position ahead of next week's return leg in the Faroes.