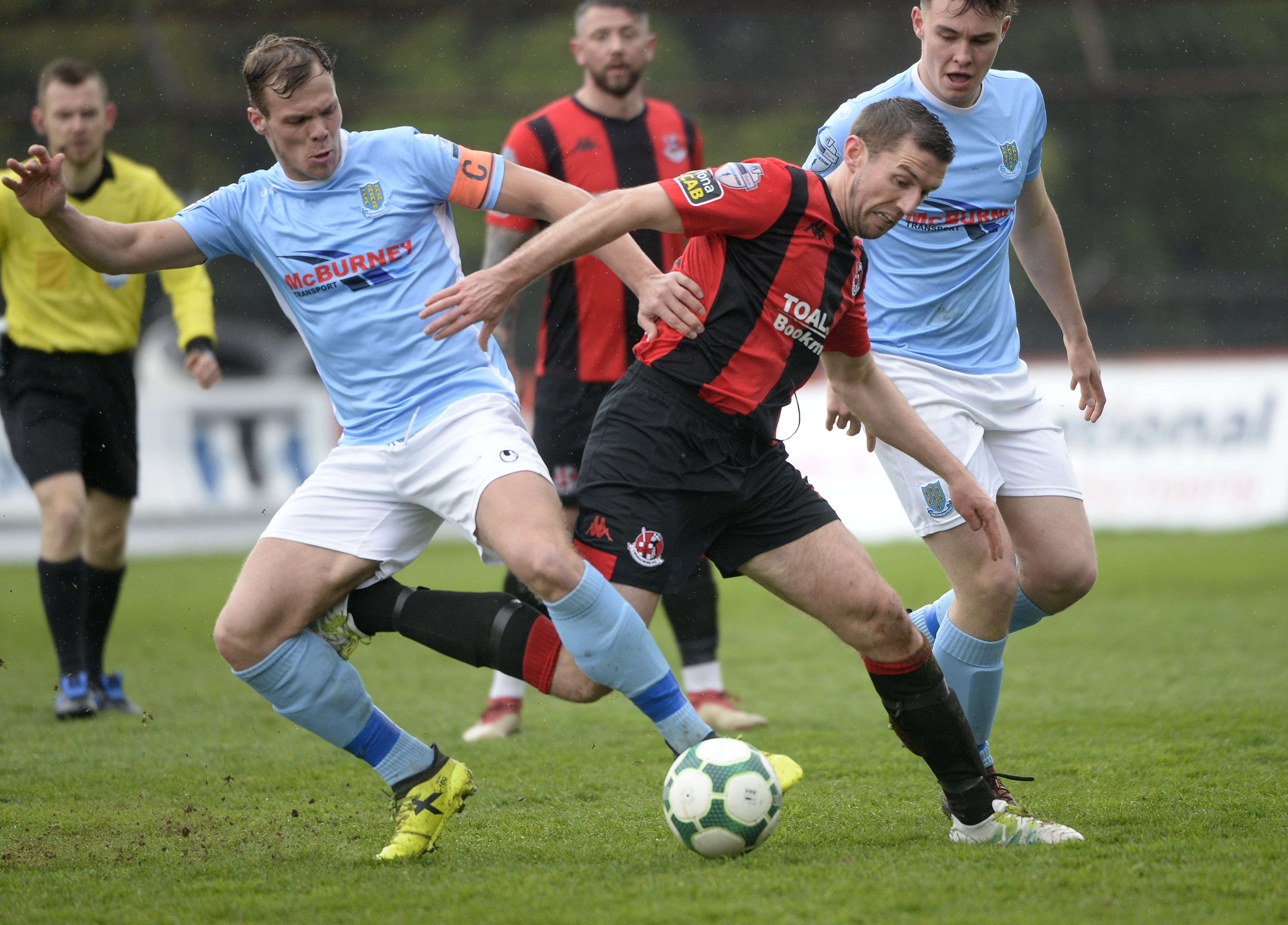 An experimental Ballymena United team suffered a 3-0 defeat at home to Crusaders in the final game of the season, but were later awarded a 3-0 victory after an error in the Crusaders team sheet.

With 2nd place secured and injuries and possible suspensions hanging over the side, David Jeffrey rang the changes, including a first league start for goalkeeper Jordan Williamson, and a place on the bench for four teenagers.

Before the game a moment's silence was held to remember the Sky Blues who have passed away this season.

Very wet and windy conditions made things extremely difficult for both teams right from the off and after an uneventful opening 10 minutes Crusaders broke the deadlock. A long ball from Crues 'keeper Harry Doherty went all the way to Rory Patterson on the edge of the box, and he took one touch before sending a stunning effort on the turn into the top corner.

With just 15 minutes gone Tuesday night's hero Shane McGinty suffered a serious head injury after an innocuous foul from Billy Joe Burns. McGinty was down for over 8 minutes receiving treatment before eventually being stretchered off, with Steven McCullough his replacement. McGinty has since headed to hospital for a scan.

After the lengthy delay the away side's Ronan Hale went close with two good openings inside 5 minutes. The first saw Kyle Owens find Hale with a long ball, but he cut inside before firing wide. Minutes later Ronan was picked out by his namesake Rory Hale at the back post, but this time he fired over.

After no real chances of note in the first 40 minutes for The Sky Blues, it was like London buses when three came along at once. A cross from Matthew Shevlin found Ryan Mayse and his close range effort was well saved by Doherty. The follow up from Fra Nolan was blocked by Burns before Gary Thompson, on his first return to The Showgrounds, got in the way of McCullough's shot.

After a long, low effort from Kofi Balmer went wide, The Crues doubled their lead on 42 minutes. Ross Clarke cut in past three Sky Blue shirt's on a run from the by-line to the D, before his shot took a huge deflection off Albert Watson, wrong-footing Williamson and finding the back of the net.

In the 6 minutes of added time, a free kick from wide from Andy McGrory almost went in, forcing Doherty to save, and at the other end Williamson pulled of a great stop to deny Ronan Hale as the half ended 0-2.

The second half had the feel of a season ending game as neither side exerted themselves too much for the final 45 of the league season, especially with Crusaders looking to their Irish Cup final next Saturday. The Braidmen made a steady start to the half and could've pulled a goal back when captain for the day Leroy Millar crossed for Mayse, but he couldn't get enough on a header to turn it goalwards.

On 55 minutes Crusaders put the game to bed with a 3rd goal. Half time substitute David Cushley picked up on some slack Ballymena passing and played in Matthew Snoddy, who made no mistake in putting the ball out of Williamson's reach and into the top corner.

The final half hour saw little happen at either end. Shevlin had time and space to shoot from the edge of the box, but could only send the ball well over. At the other end Ronan Hale had two more great chances, but yet again couldn't find a goal. Hale was able to race clear on 76 minutes and dink the ball over Williamson, but the shot hadn't the pace to reach the goal and was cleared. 5 minutes later Patterson flicked the ball on to Hale, but his shot went over Williamson and the bar.

On 78 minutes United made a double sub, with Johnny McMurray coming on for his 98th and final appearance after his departure was announced this morning. Spencer Beattie also came on to make his senior debut for the club. Both subs had bright cameo roles but couldn't help Ballymena find a goal as the curtain came down on a historic season for Ballymena United, which was touched upon by David Jeffrey as he spoke to the fans with the players after full time.