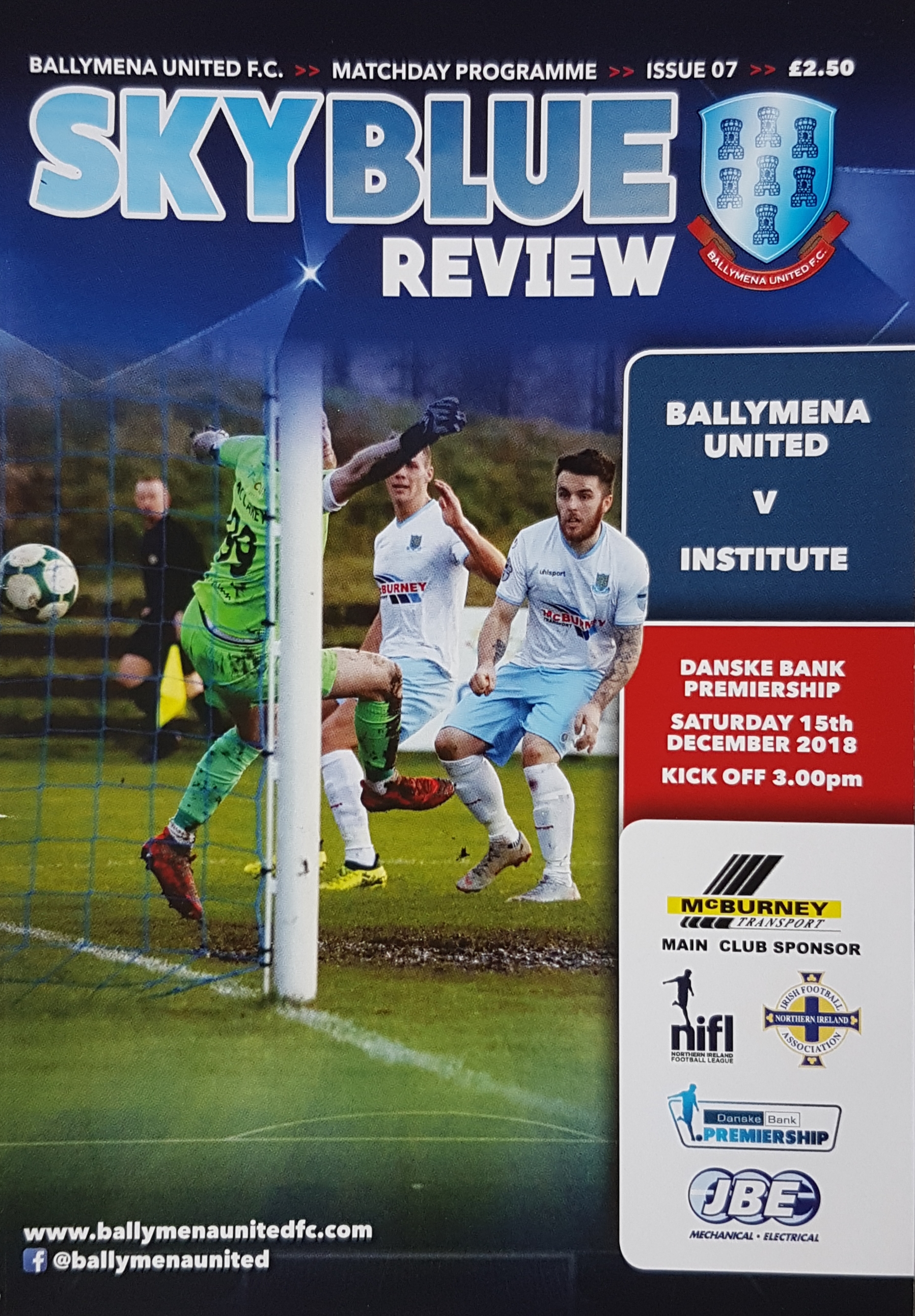 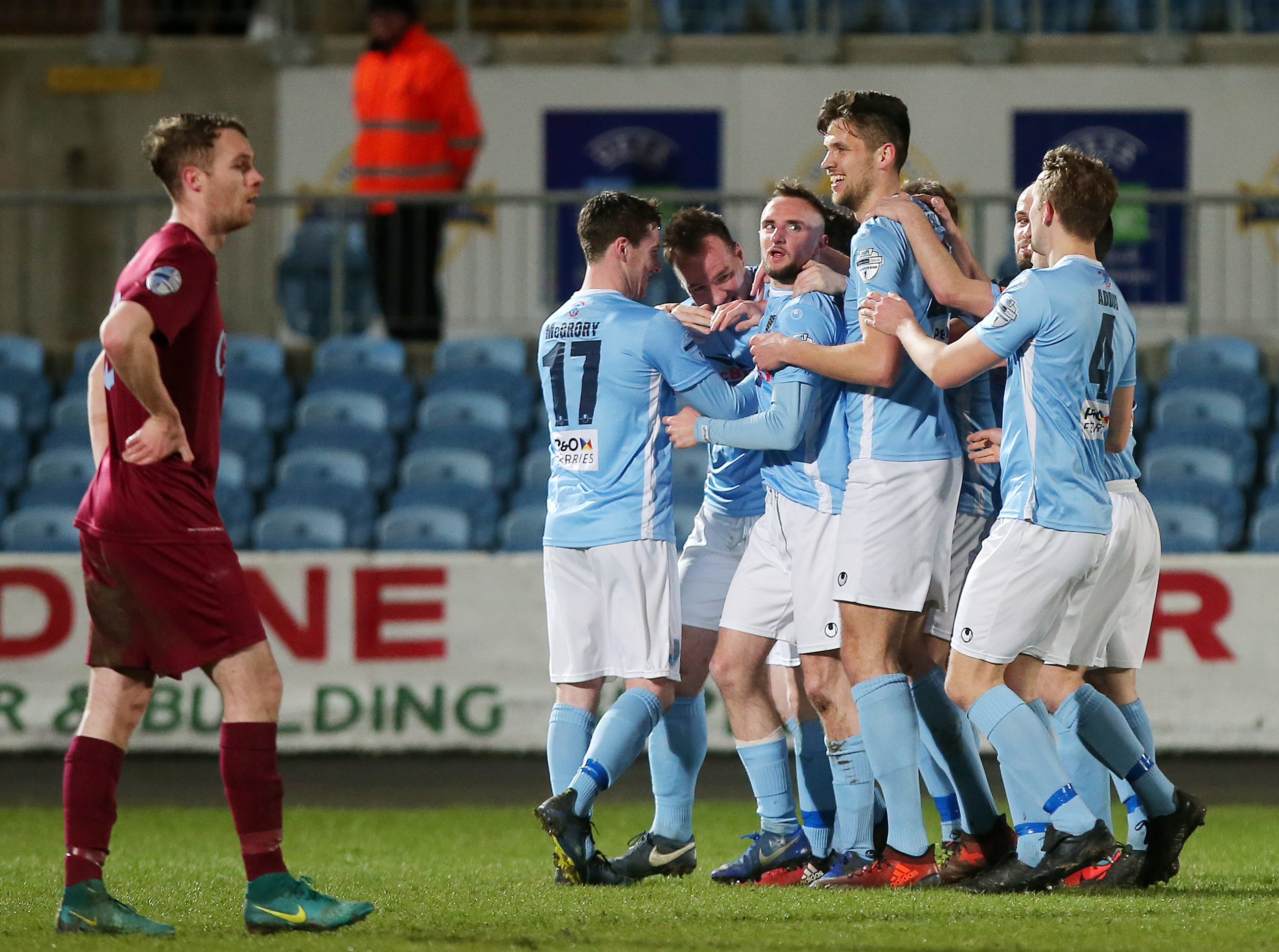 Ballymena United were outstanding on Tuesday night as they defeated visitors Institute 6-1 to grab a vital three points.

United made 4 changes from Saturday's defeat to Glentoran as they looked to put the disappointment of that performance and result behind them.

A decent start saw Andy McGrory pick up on a short back-pass from Dean Curry inside the opening minute, but McGrory couldn't get the ball under control to shoot before Ryan Mayse had a shot blocked and Albert Watson sent the resulting corner over.

However, with just 4 minutes gone, United's bright start ended when a cross came off the arm of Jonny Addis inside the box, with referee Andrew Davey pointing to the spot. Aaron Jarvis stepped up for 'Stute but saw his spot kick saved as Ross Glendinning went the right way to keep the penalty out.

A minute later the man in the middle had another decision to make as Caoimhin Bonner appeared to stamp on Mayse twice within a matter of seconds, with the defender fortunate to somehow only see yellow.

A great move involving Mayse, the returning Jude Winchester and Leroy Millar ended with Adam Lecky firing just wide before Ryan Mayse broke the deadlock on 13 minutes with a cracking strike. A long ball from Glendinning was flicked on by Lecky to Mayse, who chested the ball down before unleashing an unstoppable long range effort past Martin Gallagher.

Both sides exchanged chances with Jarvis firing narrowly wide at one end and Gallagher making a good stop to deny Mayse at the other, before the Braidmen made it 2-0. In the same combination Lecky thread a beautiful ball through for Ryan Mayse who took one touch before lifting the ball over Gallagher with his left foot for another lovely finish.

3 minutes later it was 3-0. A short corner from Millar found Mayse whose ball into the box was finished first time by Albert Watson, who guided the ball home like a striker for his first goal in Sky Blue for over 8 years.

More fantastic build up play from Ballymena ended with Tony Kane sending a dipping effort wide from the corner of the box before Leroy Millar made it 4-0 on 37 minutes. Kane delivered a perfect corner into the six yard box and the Cullybackey man had the simple task of glancing the ball home at the back post. It was almost five before the break when Lecky slid in Millar, but he was denied a second by a great block from Shaun Leppard, as a fine half ended 4-0 to the hosts.

As is the case so often when a team takes an unassailable lead into the second half, the second 45 failed to met the excitement of the first. That said, Conor Quigley had the ball in the back of the net within 30 seconds of the restart, but it was rightfully chalked off for offside.

On 55 minutes Institute pulled a goal back after a fairly simple run from Jarvis found Paul Smith, who managed to sort his feet out to beat McGrory before a fine strike from the edge of the box curled into the back of the net.

A couple of 'Stute subs was the best the next 20 minutes produced until Smith had another curling effort easily gathered by Glendinning. Mayse was chasing a hat-trick that his performance more than deserved and he saw an effort fly over the crossbar before he did find the net, but the strike was ruled out for a handball in the build up.

On 76 minutes Ballymena's best play of the half made it 5-1. Winchester found Mayse on the right and he added a second assist to his two goals with a deadly cross along the six yard box that was tapped home by Adam Lecky from close range.

A trio of subs late on saw Shane McGinty, Matthew Shevlin and Andrew Burns all introduced and it was McGinty who helped make it 6. Shevlin did well to find Mayse, who in turn found McGinty, and he cut inside to hit a shot which took a huge deflection off Shaun Leppard, wrong-footing Gallagher and finding the net for the 6th and final goal of the game.