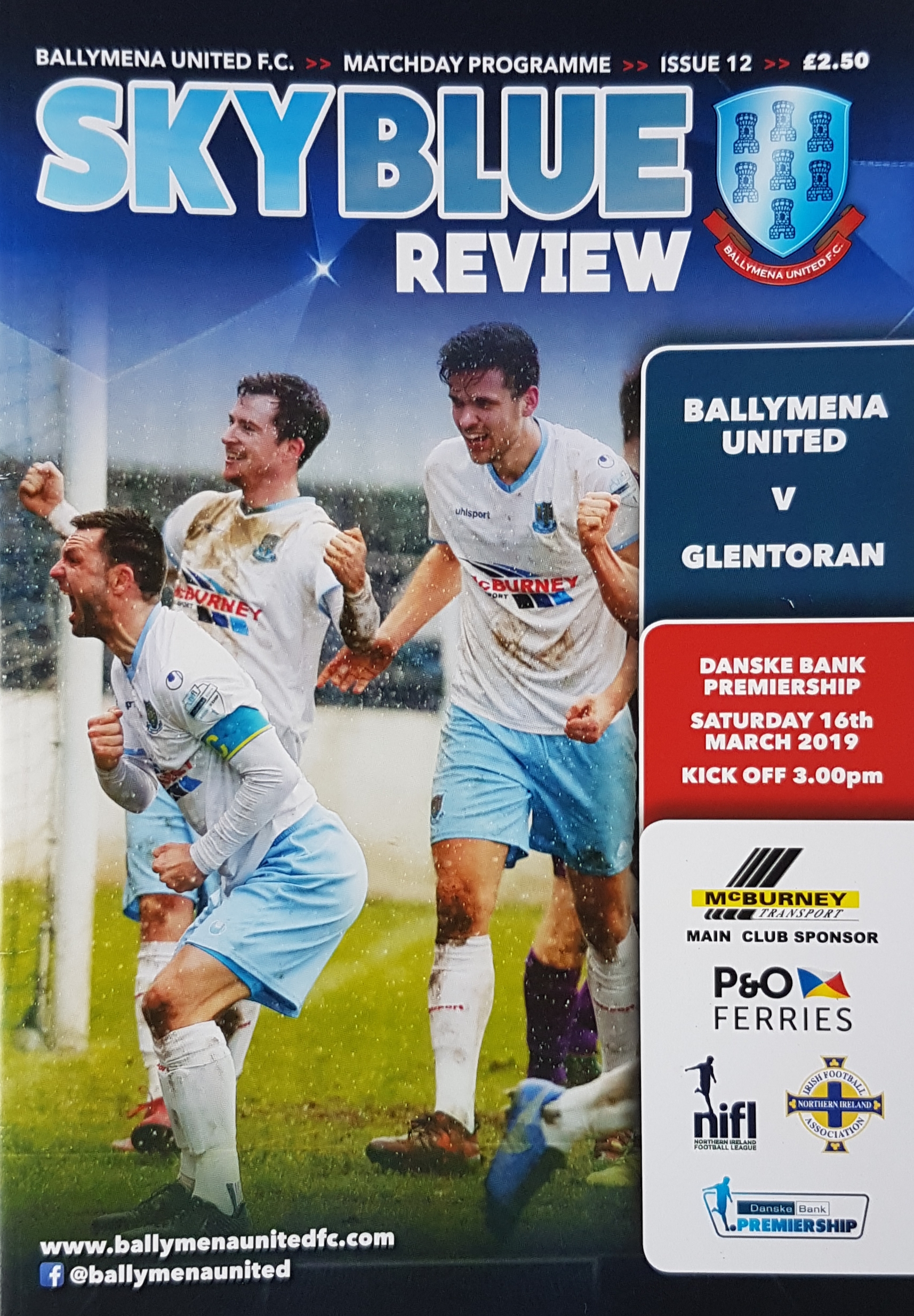 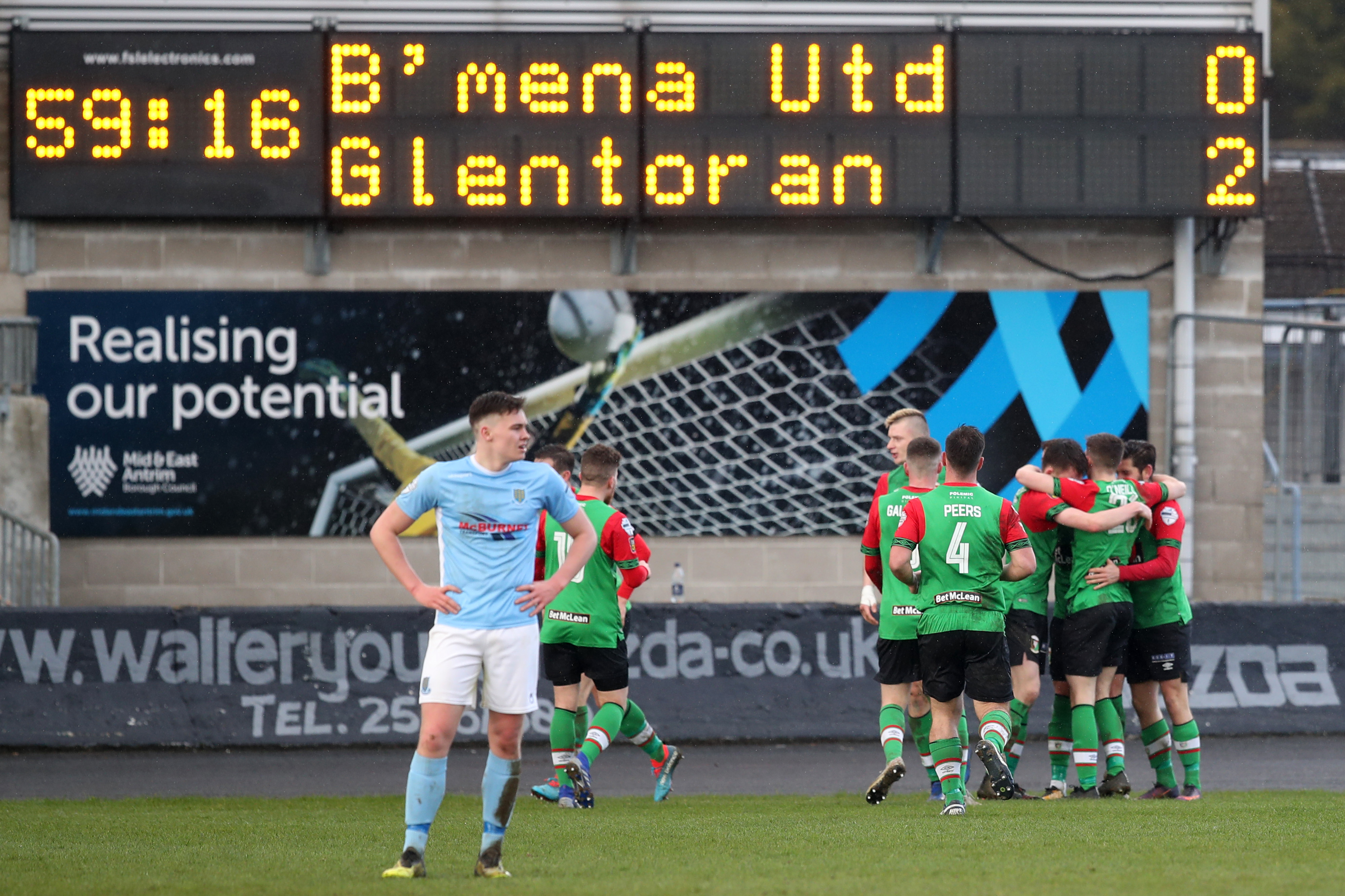 Ballymena United suffered their first home league defeat of the season today after losing 2-0 to Glentoran.

David Jeffrey went with the same side who handed out a 4-0 drubbing to Coleraine last Saturday, but this performance was world's apart from that on derby day.

In yet more blustery conditions, Ballymena failed to get going from the off and after Robbie McDaid had scuffed a shot wide, the Glens scored with just 3 minutes on the clock. Curtis Allen refused to give up on a long ball over the top and the forward's cross from the left was neatly hooked back into the far corner by Paul O'Neill.

The Braidmen's first attempt of any kind came on 13 minutes when Kofi Balmer showed some great feet to create space, but his long range effort sailed well over. That effort from Balmer was virtually the only time in the half the hosts caused Elliott Morris any sort of concern.

The Glens were far from their best as well in the half, but were creating the chances Ballymena weren't. Albert Watson, making his second home debut for the Sky Blues, got a vital touch on a cross from James McCarthy to prevent Allen scoring, before Chris Gallagher curled a 25 yard effort over the crossbar. Allen was a step ahead of United's defence for the majority of the day and called Ross Glendinning into action with a low shot from outside the box that was easily gathered before the striker blasted a half volley over.

At the end of the half Glendinning had to be alert again to tip over a cross from McDaid that was making its way into the top corner, as a half to forget for Ballymena ended 0-1.

United started the second half with a bit more purpose, with Johnny McMurray in particular looking brighter. And it was McMurray who set up Ballymena's best chance of the game when he found Conor Quigley free at the back post, but the wing back's effort was saved by the body of Morris after a poor first touch.

The visitors almost scored straight down the other end as McDaid did well to take down a cross, but his shot on the turn flew just over.

On 50 minutes a large section of the Sky Blue support thought they had equalised when a ball in from Watson agonisingly missed McMurray at the post before the ball drifted inches wide, but from the stands the ball had looked inside the post.

Those premature cheers quickly turned to frustration as the Glens doubled their lead on the hour mark. John Herron nipped in ahead of Jim Ervin before playing in Robbie McDaid who raced clear one on one and he easily slotted home past Glendinning.

Ballymena tried to hit back quickly with McMurray turning and shooting on the edge of the box, but his low effort was tipped wide by Morris, which was as close as Ballymena came to a way back into the game.

Ballymena turned to Ryan Mayse, Tony Kane and Shane McGinty from the bench but the changes were to be to little effect. With 18 minutes left Ballymena had a potential chance to get back into the game as Glentoran were reduced to 10 men when McCarthy saw red for a horror challenge on Andy McGrory, but the sending off made no difference to the game as Glentoran saw out the remainder of the match to seal a 2-0 win.