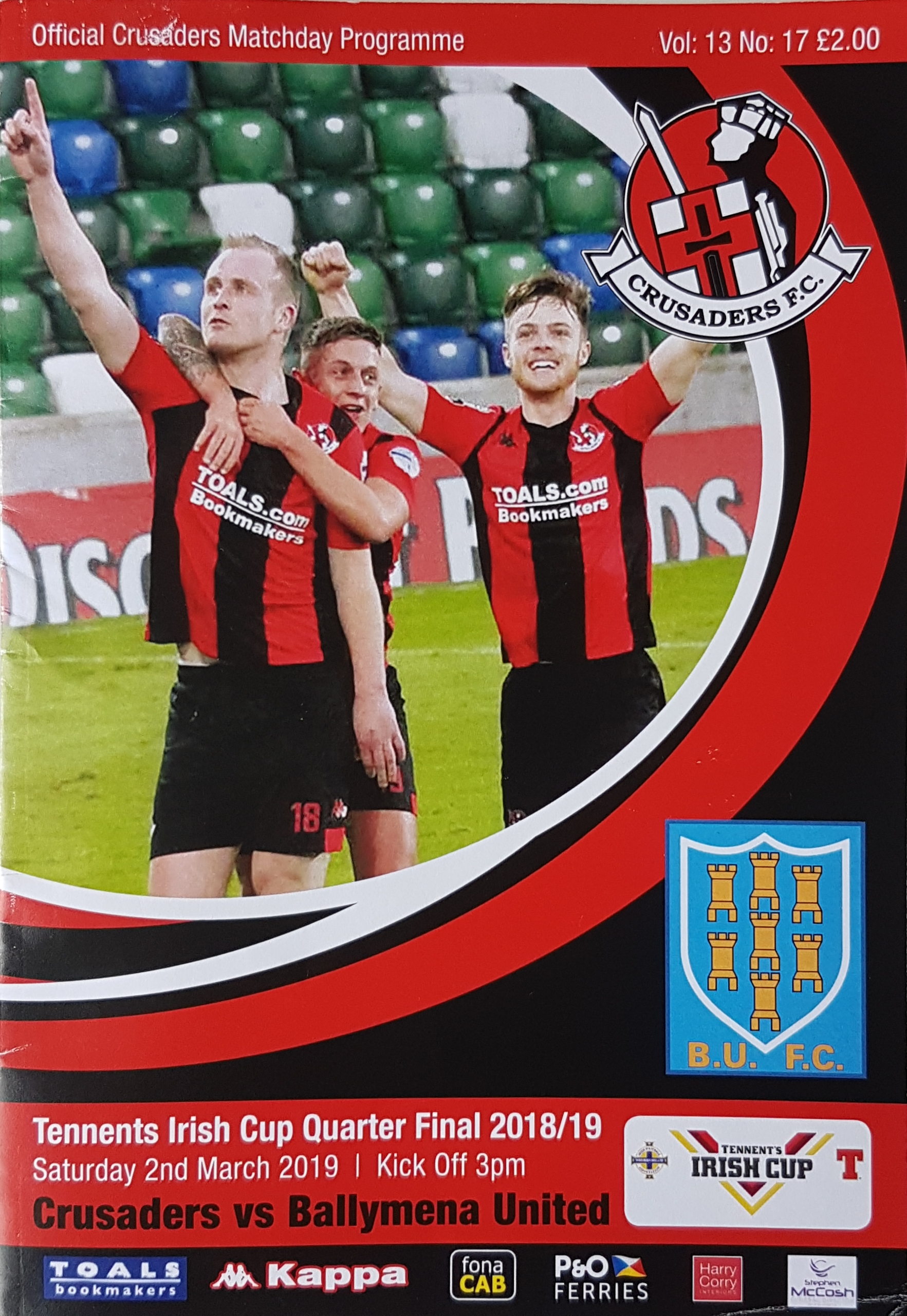 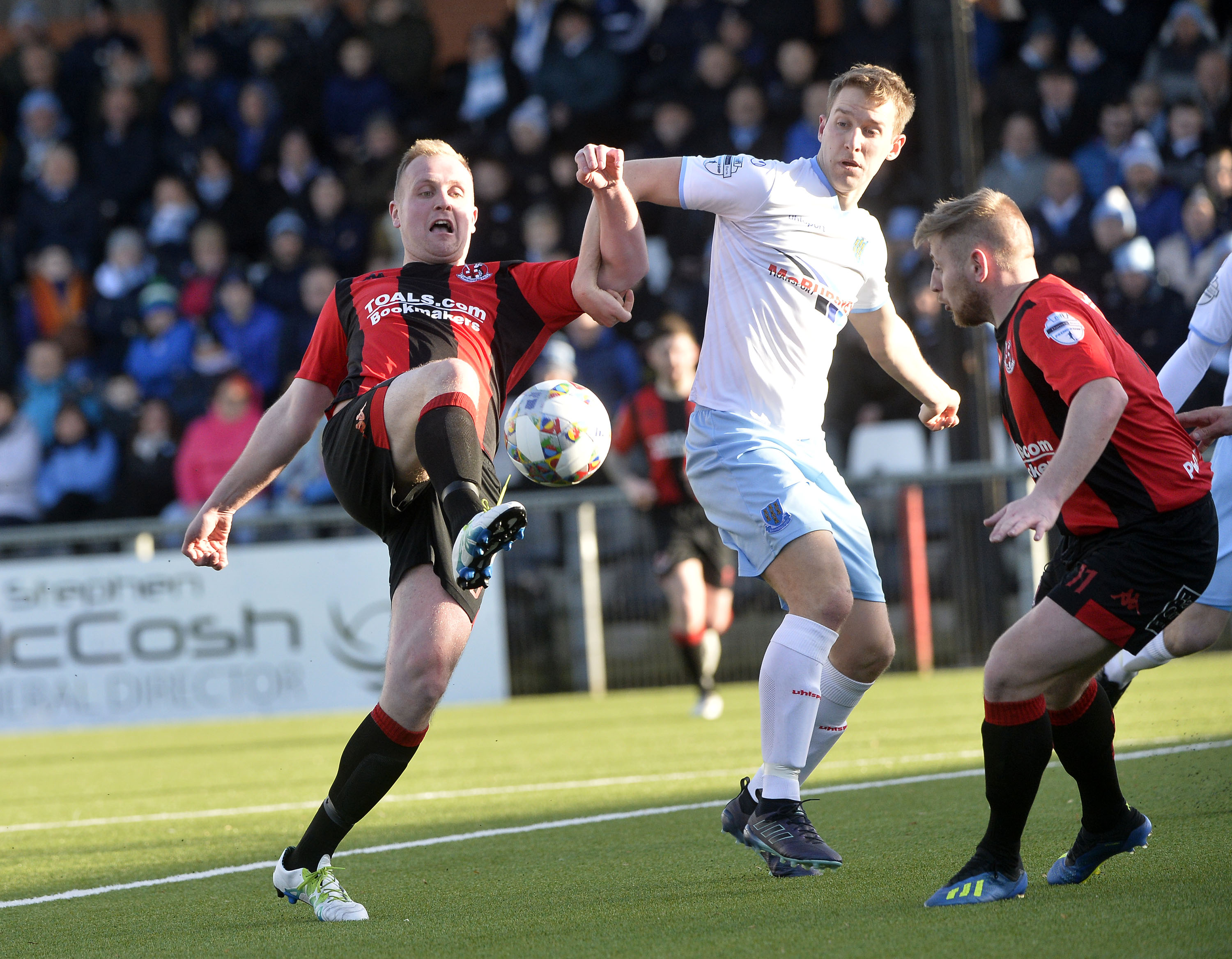 Ballymena United limped out of the Tennent's Irish Cup at the quarter final stage with a 3-0 defeat to Crusaders at Seaview.

United headed to Belfast for the third Saturday running, looking to take a step closer to a first Irish Cup success since 1989.

A strong wind was aiding the hosts in the first half and inside 45 seconds Declan Caddell went close, firing narrowly over from the edge of the box. Shortly afterwards Ross Glendinning was tested for the first time as Philip Lowry slipped in David Cushley, but the former Sky Blue fired his effort straight at the 'keeper.

The game evened itself out after the Crues' early chances but Ballymena were dealt a blow just 17 minutes in when Jude Winchester was forced off through injury, with Willie Faulkner taking his place. Already without the likes of James Knowles and Ryan Harpur, the loss of Winchester weakened United further in the middle of the park, and after Adam Lecky glanced a header well wide, a disasterous eight minutes for the visitors saw Crusaders net three times.

The first goal came on 21 minutes. A throw in into the box found Cushley, who held of Scot Whiteside before producing a lovely back-heel across the six yard box, and it was met at the back post by Jordan Forsythe who easily finished.

Three minutes later it was two. A poor pass at the back from Jonny Addis allowed Cushley to pounce, and he grabbed his second assist as he played in Jordan Owens who lifted the ball over Glendinning and into the goal.

It went from bad to worse on 29 minutes with a freak goal. After a string of passes Forsythe found Billy Joe Burns halfway inside the Ballymena half, with Burns' cross into the box catching in the wind and going straight over Glendinning and into the top corner.

Those quick fire goals gave Ballymena an almighty mountain to climb, with the frustration visible as Lecky was booked for dissent. At the end of the half Ballymena looked to grab a goal before the break to get themselves back into it, with a volley from Tony Kane hitting Lecky and going wide before Addis went close when he flicked the ball inches over the bar, as a poor half for the Braidmen ended 3-0.

United were able to steady the ship in a second half that won't live long in the memory of either side. Cushley continued to look in the mood as he got into a shooting position before curling the ball just wide.

United were given a chance to work Sean O'Neill when Lecky won a free kick 25 yards from goal, but Kane sent the set piece over the crossbar before an even bigger chance came Cathair Friel's way.

Faulkner capitalised on some slack play from Crusaders and he slid in Friel who was clear one on one, but his first touch was far too heavy and O'Neill was able to come out and gather the ball.

If Ballymena's hopes of a memorable comeback weren't already slim, a stunning save from Glendinning to deny a volley from Cushley on the edge of the box stopped those hopes from becoming non-existent, but in truth a way back for United next looked at all likely. On a positive note Ryan Mayse made his return from a long injury lay off as he got 20 minutes under his belt.

Late on Burns and Cushley went close as Crusaders ran out deserved 3-0 winners against a Ballymena well off the pace and well beaten on the day in front a great travelling support.