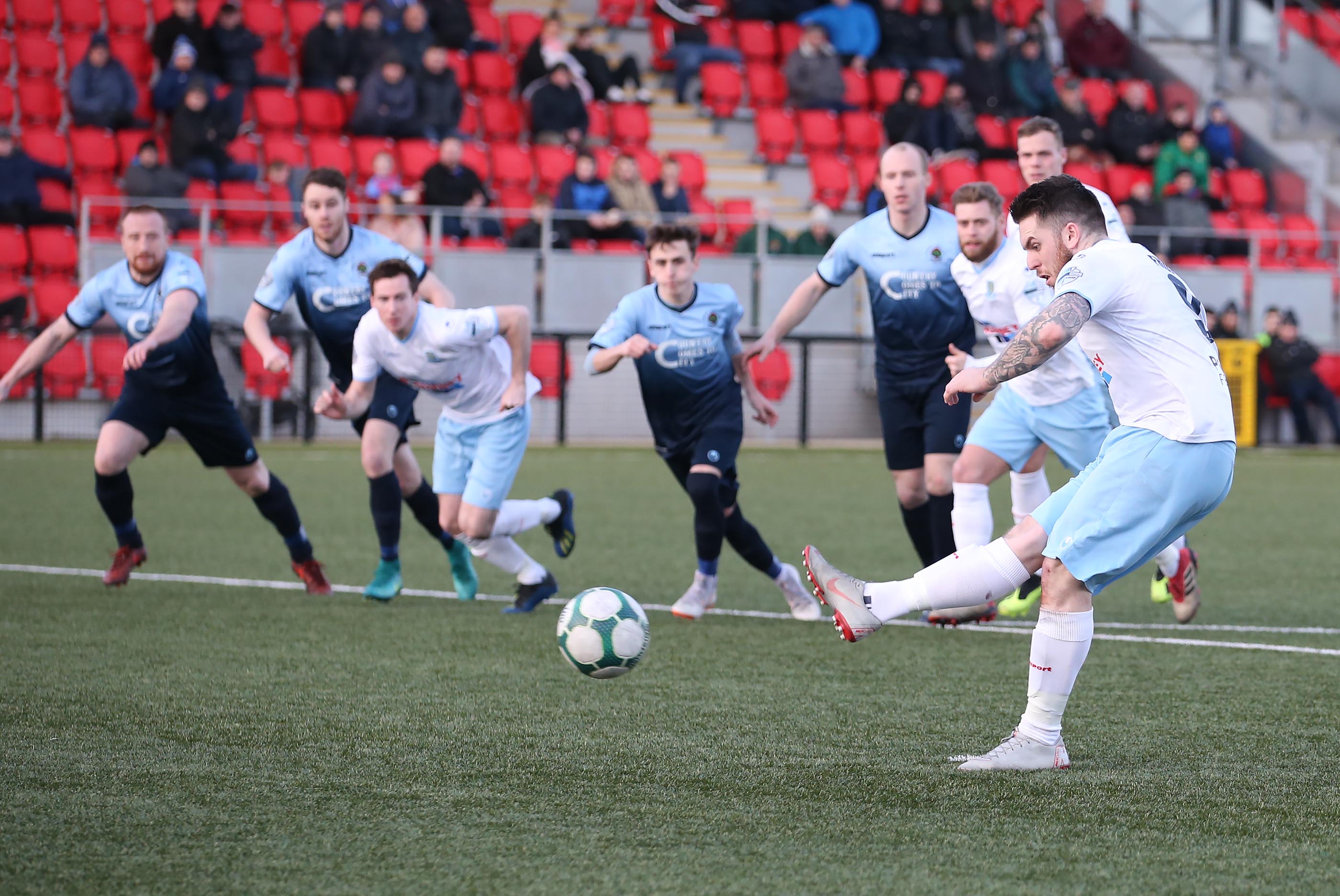 Goals from Steven McCullough and Cathair Friel helped Ballymena United to a hard fought 2-1 win over Institute at the Brandywell.

It was Institute's first game since manager Paddy McLaughlin departed for Solitude and under the watchful eye of Interim boss Kevin Doherty, Stute made a decent start. Within 2 minutes Joseph McCready went close, striking just over from the edge of the box.

After the hosts' bright opening 10 minutes, United began to control play before taking the lead 16 minutes in with a goal directly from a corner. The Sky Blues won a corner on the right and Steven McCullough's in-swinging ball went straight through the hands of unfortunate Stute 'keeper Martin Gallacher and into the net via the post.

Within 4 minutes Institute had a great chance to draw level as McCready's shot deflected into the path of Thomas McBride, but he was denied by Ross Glendinning who pulled off a fine save with his legs. For the rest of the first half it was the visitors who were on top, with plenty of the ball and a few chances to go with it.

Kofi Balmer was able to keep a corner alive as he hooked the ball back into the box at the back post. It was headed goal-wards by Cathair Friel before being helped on by the head of Jonny Addis, but Gallacher was able to make the save. At the other end Institute's Stephen Curry did well on the left to work space for a cross which was put onto the roof of the net via a looping McBride header. That looping header was the last time Glendinning was troubled in the half as United probed a second in the final 15 minutes.

The in-form Adam Lecky rifled a shot over on the edge of the box before Aaron Jarvis cleared the ball off the head of a waiting Friel after a deep cross from Andy McGrory. Goalkeeper Gallagher made up for his error in the McCullough goal when he was equal to a low drive from distance via the boot of Jude Winchester after he was teed up by James Knowles.

In first half added time Winchester delivered an inviting cross into the back post which was cleared by Gallagher onto McGrory, who knew little about it as the ball rebounded off him and narrowly over the crossbar, as United, not at their brilliant best despite the chances, took a 1-0 lead to the break.

Just 2 minutes into the second half Ballymena were handed a chance to double their advantage from the penalty spot after Lecky was hauled down in the box by Colm McLaughlin. The Braidmen's top scorer Cathair Friel stepped up and made no mistake from 12 yards, sending Gallagher the wrong way to make it 2-0.

Ballymena's two goal lead only lasted 6 minutes as Institute pulled a goal back on 53 minutes. Following a short corner Ronan Doherty picked out Stephen Curry in acres of space at the back post, and he finished beautifully with a volley that was far too strong for Glendinning.

Without creating great openings the home side were starting to put Ballymena under real pressure as the Sky Blues lacked some of their composure from the first half. Despite that, a huge chance fell to Winchester just before the hour mark. The midfielder did well to dispossess Dean Curry out wide deep inside Institute's half and Winchester raced clear on goal before seeing his dinked effort come off the post. Winchester turned provider shortly afterwards as he set up Kofi Balmer who let fly from all of 30 yards, but he was thwarted by a fantastic one handed stop from Gallagher.

Glendinning was also called upon to make a solid stop when he was tested by a McCready free kick from distance, with the 'keeper palming the ball round his post.

With 15 minutes left Winchester missed the chance of the game to make it 3-1 when he was played through one on one by Lecky who produced an exquisite piece of skill to create the chance, but Gallagher came out on top making the save. The last 10 minutes produced a nervy ending to the game for Ballymena as Institute through everything at them, with Glendinning stopping efforts from McCready and Ronan Wilson.

United were dealt a blow late on as Ryan Harpur, who'd only came on as a sub with 20 minutes left, was forced off himself through injury, with Willie Faulkner taking his place.

Ballymena hit the woodwork for a second time when McCullough rattled the crossbar from a free kick but the last chance of the game came Institute's way as sub Paul Smith drilled a shot straight at Glendinning, who saved. Ballymena held on to take a massive 3 points away from The Brandywell, with only a days rest before Monday night's Tennent's Irish Cup tie with Portadown.