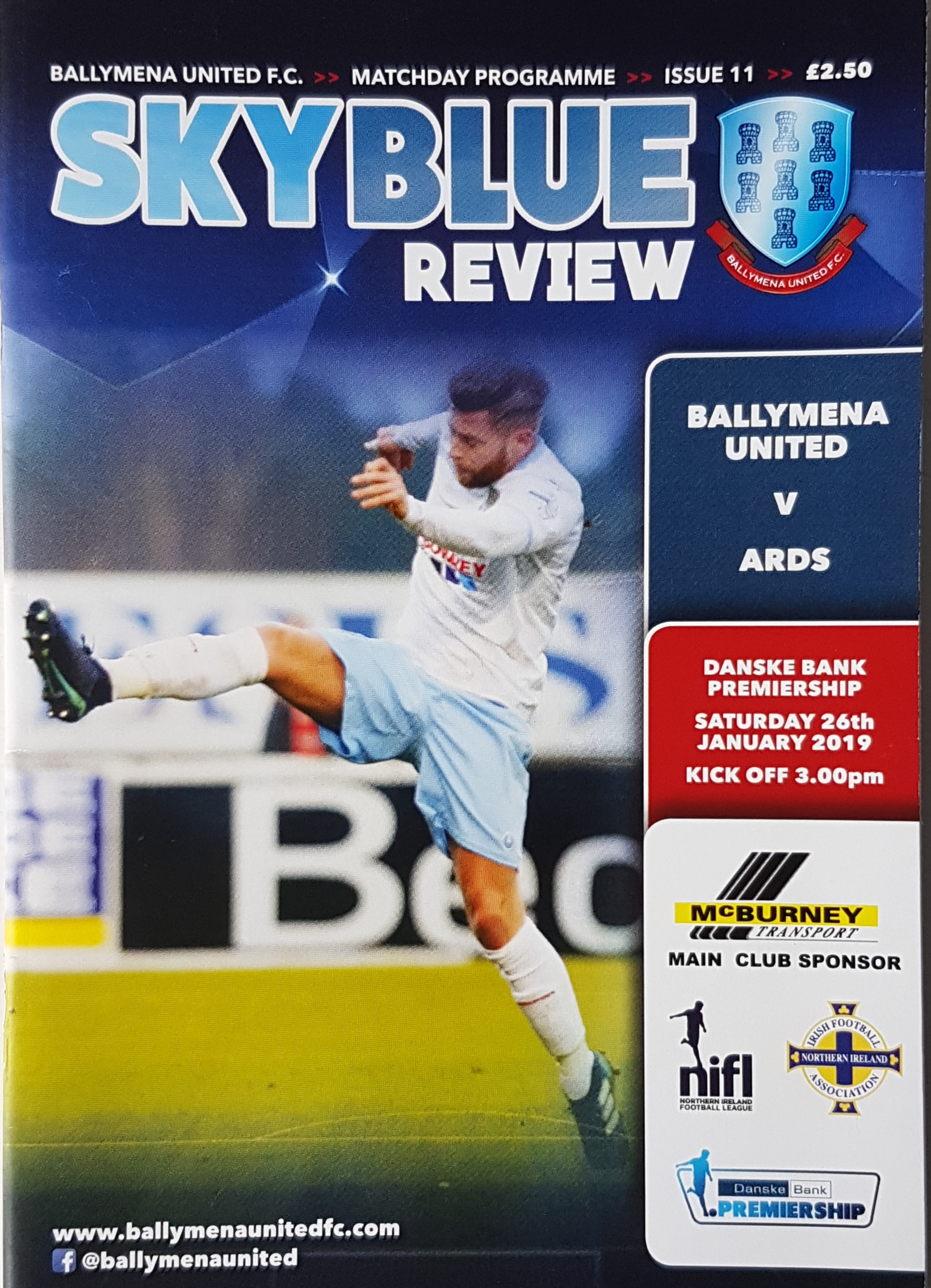 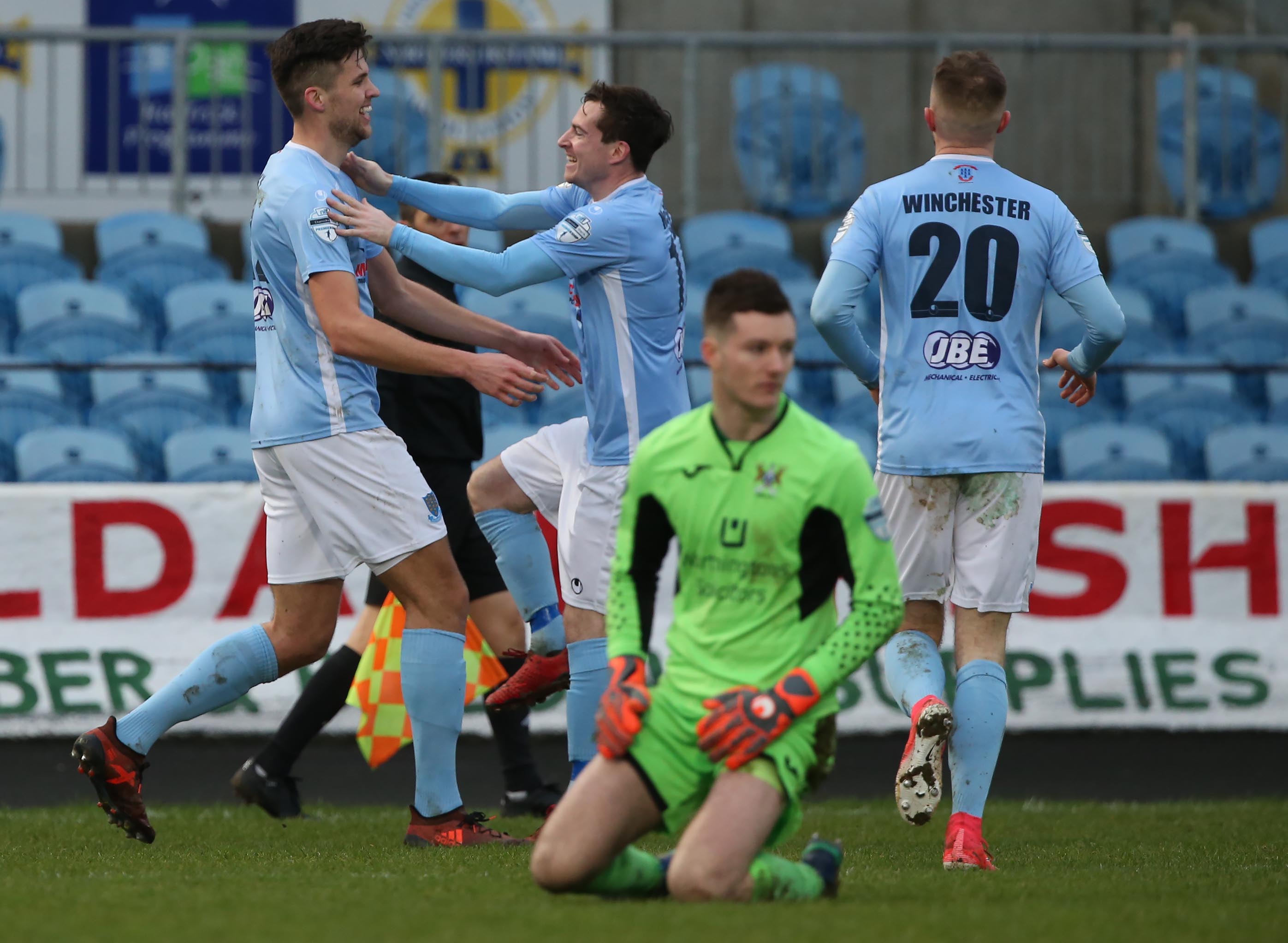 Ballymena United put in an impressive performance in terrible conditions at the Showgrounds on Saturday afternoon as they defeated Ards 4-1.

The build up to the game was somewhat overshadowed by the condition of the pitch, which passed an inspection 90 minutes before kick-off, following overnight and early morning rain.

United made the ideal start on the quite frankly awful playing surface as they went ahead after just 3 minutes. A fantastic passage of play from Ballymena ended with Lecky teeing up James Knowles who saw a chance to shoot thwarted by a Kyle Cherry tackle, but the ball fell to Cathair Friel who hammered home from 12 yards out.

The home side's bright start continued as Andy McGrory sent a free kick from 25 yard narrowly wide and into the side netting. With 15 minutes gone Ballymena found a second. Adam Lecky got himself on the end of a loose ball after a great tackle from Kofi Balmer, with the striker rounding the onrushing Sam Johnston before coolly slotting into the empty net from a tight angle.

Ards were having their reoccurring problem this season of playing well but creating little, but on 18 minutes a header from Daryl Evans was turned goal-wards from close range by ex-United man Darren Henderson, with the ball coming back off the post.

The Sky Blues had the ball in the back of the net for a third time before the half hour mark, however it was ruled out for offside. United broke 3 on 3 with Winchester picking out Friel who was denied by the feet of Johnston, with Lecky offside as he finished off the follow up. Ballymena had a strong appeal for a penalty waved away shortly after when Lecky went down inside the box, but referee Ross Dunlop instead penalised Lecky for a dive, but bizarrely Dunlop didn't book Lecky for his supposed simulation.

Further chances came for either side as Evans headed straight at Ross Glendinning at one end, and McGrory dragged a shot wide at the other, before Ards pulled a goal back in the last minute of the half with the simplest of goals. Goalkeeper Johnston came up to take a free kick from just inside his own half and his route one delivery into the box was met by Darren Henderson who rose highest to head home into the top corner for 2-1 at the break.

Just like the first half, the Braidmen started the second half with an early goal. Jonny Addis picked out Friel in acres of space with a long ball and Friel brilliantly found his strike partner who took a few touches before lifting the ball towards goal inside the 6 yard box. Despite the best efforts of Eamon McAllister to keep the ball out, it went over the line to give Adam Lecky his second of the day.

After a spot of grappling between Kym Nelson and Balmer before a corner, their tussle continued after the corner as Nelson looked to swing an elbow at Balmer off the ball, leaving the Ballymena man with blood on his face, but unbelievably none of the four officials picked up on the incident and despite a discussion between the 4th official and the referee, no action was taken on Nelson.

Ballymena's frustrations deepened 3 minutes later when Lecky was booked as he was harshly adjudged to have dived for a second time inside the box. Inside the final half hour Lecky teed up Friel with a neat touch but Friel was denied by a good stop from Johnston and minutes later an incredible team move from Ballymena almost ended in a stunning goal. McGrory, Jude Winchester and Leroy Millar were all involved, with the latter eventually putting a half volley on the turn just over.

As Ards looked to make the last 15 minutes a nervy affair for the hosts, the visitors struck the woodwork for a second time. Henderson lifted the ball over the top of United's defence for sub Mark Kelly, whose shot came back off the crossbar before it was cleared.

Friel had a half volley destined for the bottom corner blocked on the line by Evans before Ballymena put the result beyond doubt with a fourth. A free kick from Steven McCullough looked to have been flicked home by Friel, but replays showed the last touch came off the unfortunate MIchael Kerr.

Just after the goal a torrential downpour caused more problems for the pitch as water began to lie, but in the heavy conditions United still carved out chances as Millar headed a cross from sub Tony Kane wide, before Kane himself sent a header wide, as Ballymena ran out 4-1 winners to cut the gap at the top back to 3 points.