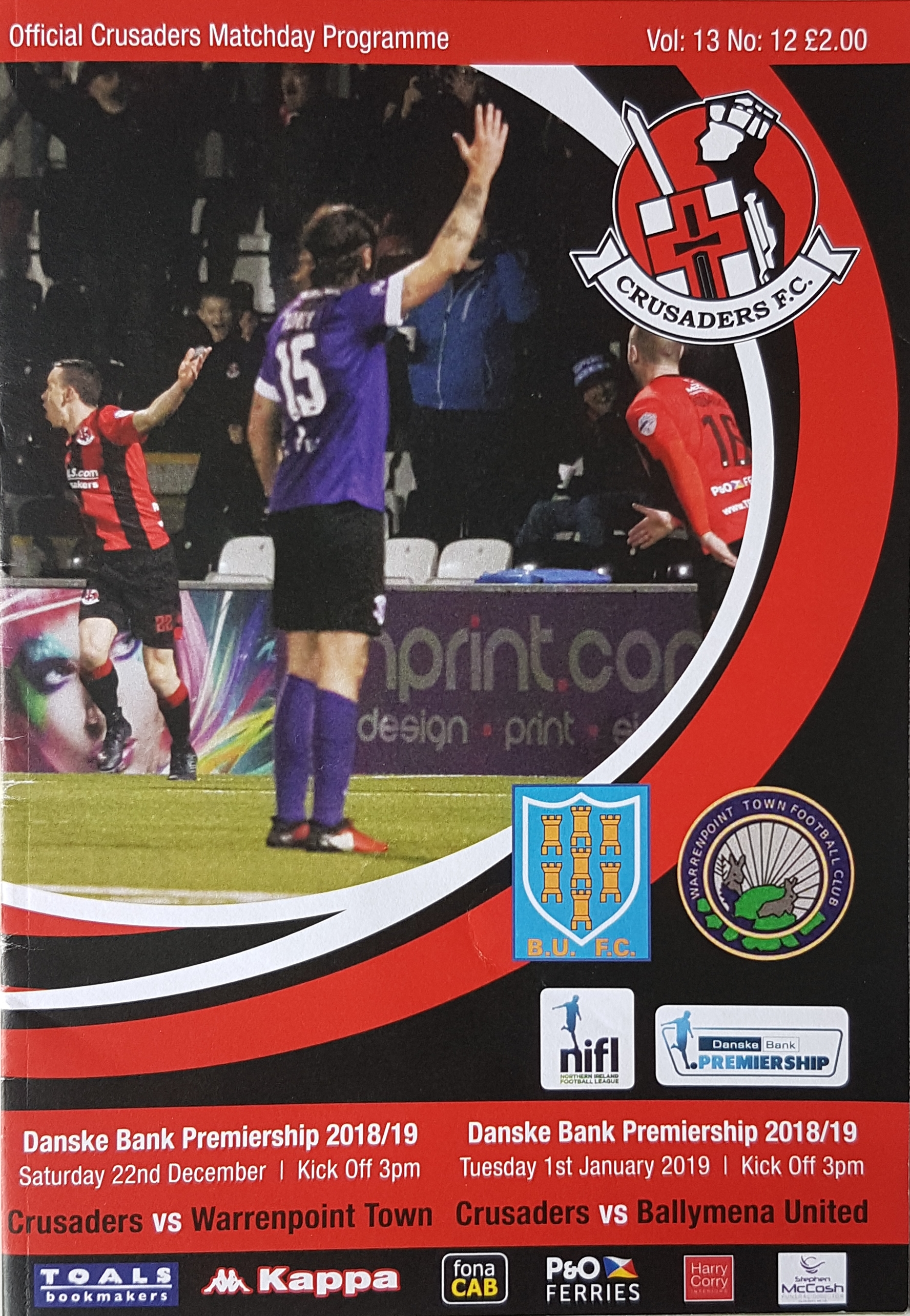 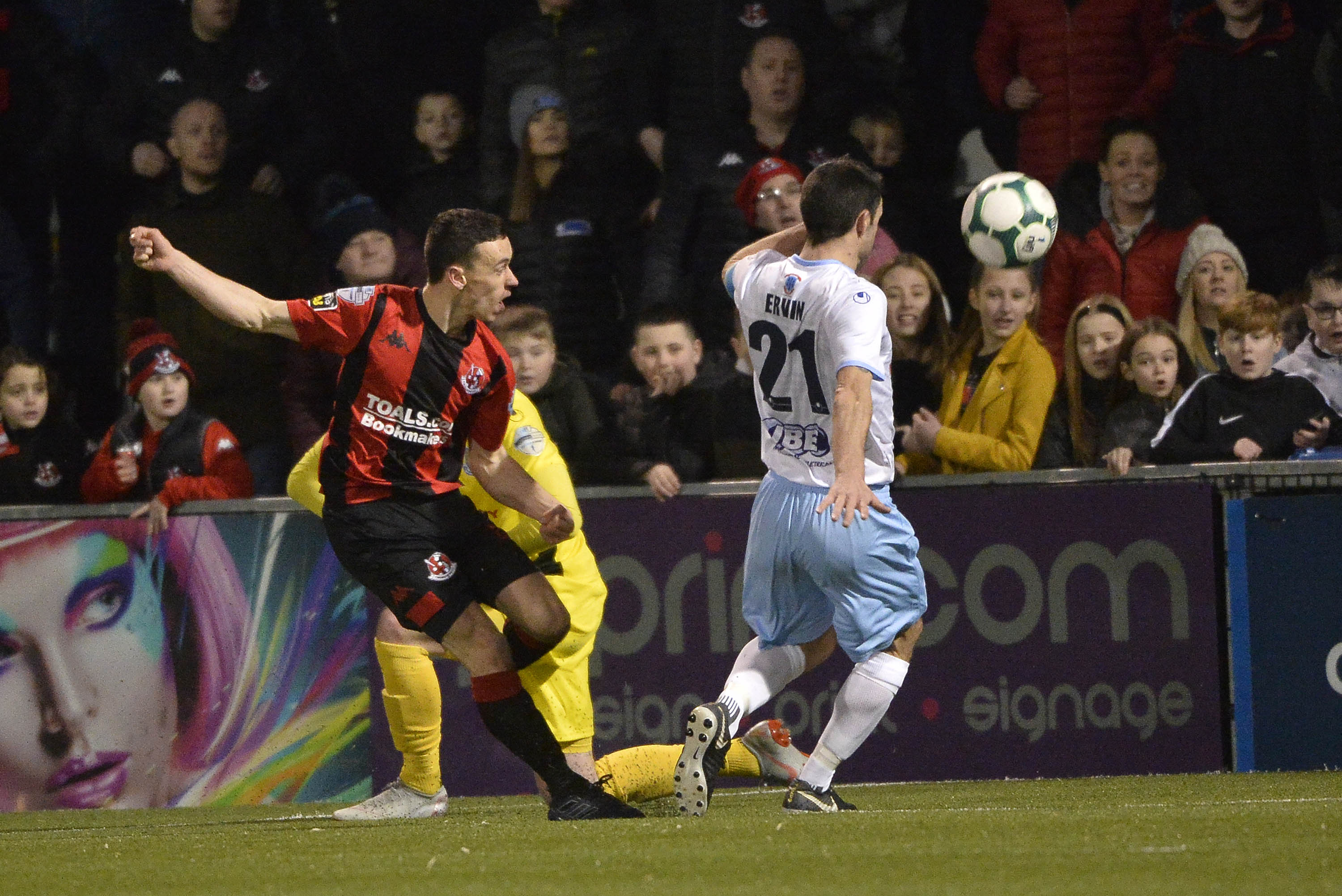 Ballymena United suffered defeat for the first time in 20 games as they lost to Crusaders at Seaview on Tuesday afternoon.

United kicked off 2019 with a two point lead at the top of the league ahead of the trip to North Belfast, but found themselves trailing after just 6 minutes. A good passing move from The Crues ended with Jordan Forsythe lifting a through ball over the United defence for Paul Heatley, who finished beautifully with a first time volley that went under Ross Glendinning.

Just 3 minutes later the hosts almost doubled their advantage. Billy Joe Burns played in Heatley who showed great feet inside the box to get space for a shot which was well saved by Glendinning. The 'keeper's save rebounded off Declan Caddell and onto the post before going wide. Ballymena's first effort didn't come until the 11th minute when Johnny McMurray neatly picked out his strike partner Cathair Friel, but he dragged the ball well wide of the target.

With little to split the teams possession wise an inswinging corner from Heatley almost went straight in, forcing Glendinning to save well. The Braidmen hit Crusaders on the counter attack straight away but after McMurray again picked out Friel, his shot ended up on the railway line. With United finally creating chances McMurray narrowly headed wide a corner from Tony Kane, whilst at the other end a Philip Lowry effort from the edge of the box, through a sea of bodies, was well saved and then gathered by Glendinning.

On 25 minutes Ballymena levelled. Shane McGinty and Friel linked up on the right, with the latter delivering a perfect cross into the six yard box, where Jude Winchester nipped in in front of Burns to poke the ball home.

The Sky Blues were only on level terms for 4 minutes as Crusaders retook the lead. A free kick from the middle of the Ballymena half by Burns was glanced on to the back post by Lowry where former United man Kyle Owens was waiting completely unmarked. The centre half had time to take the ball down and set himself before firing past Glendinning.

Crusaders kicked on after the goal with Owens almost scoring again as he somehow missed a sitter, however the offside flag had gone up anyway, before Jordan Owens held the ball up for Lowry who flashed an effort wide. In the final 5 minutes of the half it was backs to the wall for United. A Forsythe free kick from 20 yards was saved by Glendinning and Jordan Owens missed the rebound by inches, before David Cushley fired into the side netting from an extremely tight angle as the half ended 2-1.

Ballymena made a good start to the second half, and stayed on top for the majority of the second 45, as they looked to hit back. A free kick from the ever impressive Steven McCullough dropped to Jonny Addis, but his powerful strike was blocked by Colin Coates who threw his body on the line.

For all the good play Ballymena were struggling to create clear cut chances, until they equalised for a second time on 64 minutes. Good build up saw McCullough find Friel on the left, with the striker crossing to find Steven McCullough again, who scored a fine goal with a sharp turn and strike that was past Sean O'Neill before he'd seen it.

Ballymena could've went ahead a couple of minutes later when a free kick was flicked on by Winchester for McGinty, but he fired over from just inside the box. From very little the hosts almost went ahead again when a shot from Heatley rattled the crossbar before The Sky Blues cleared their lines. As probably expected Crusaders came on strong in the final 10 minutes. A cross fell kindly for Heatley at the back post but his goalbound shot was fantastically blocked by Kofi Balmer.

With 4 minutes left Crusaders went ahead for the third time with an extremely fortuitous goal. It started as Cushley found Paul Heatley with a smart crossfield ball. Heatley made his way into the box and cut inside twice, before unleashing a shot that looked to have been well blocked by Jim Ervin. However, his block looped into the air towards goal, with the spin on the ball taking it away from Balmer on the line and into the goal.

Ballymena brought on Ryan Mayse to try and find a third equaliser and only for a poor touch Mayse was almost in to score, whilst at the other end another sub, Matthew Snoddy went clear for the home side but he missed a one on one chance, however Crusaders held on for the win.