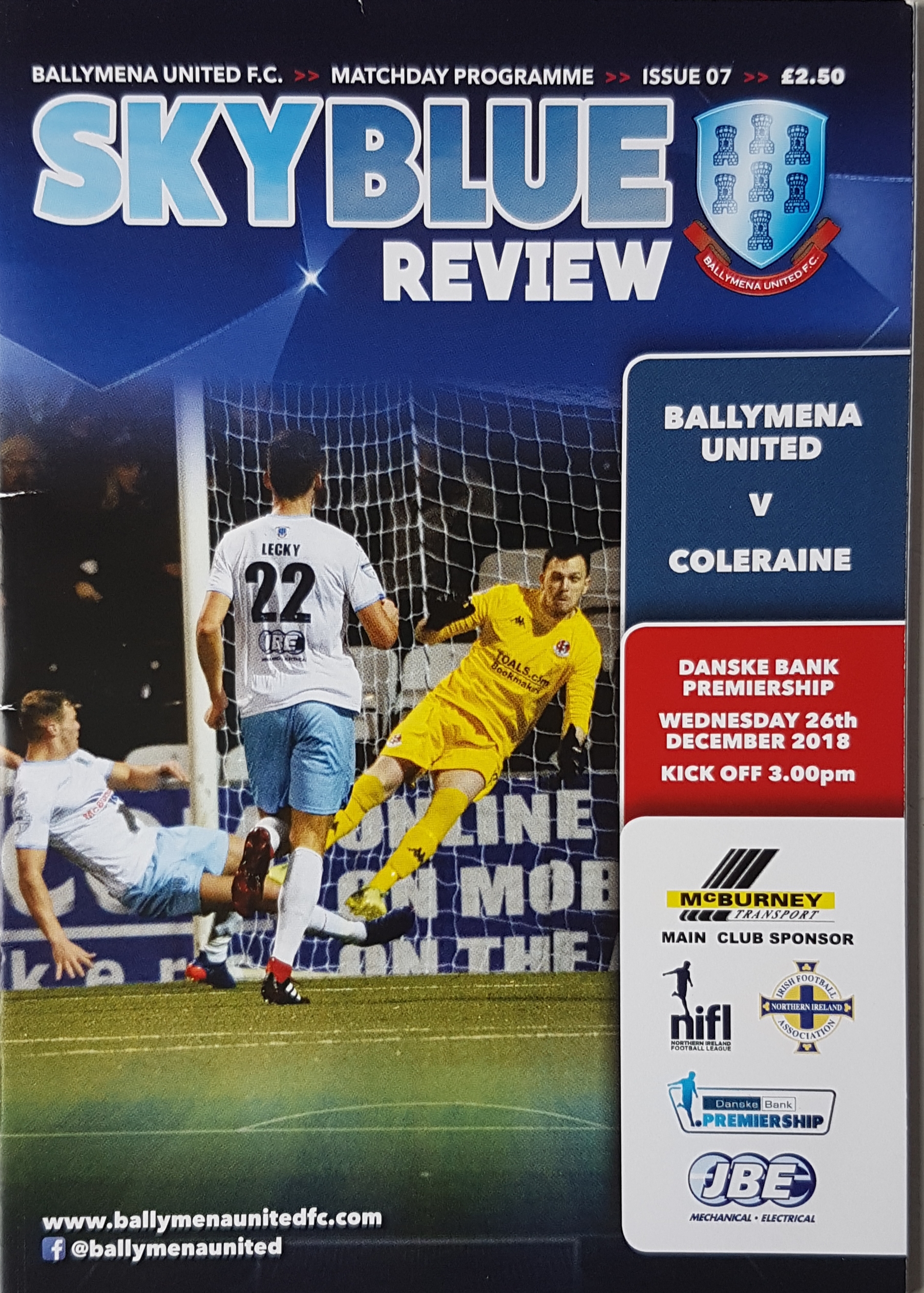 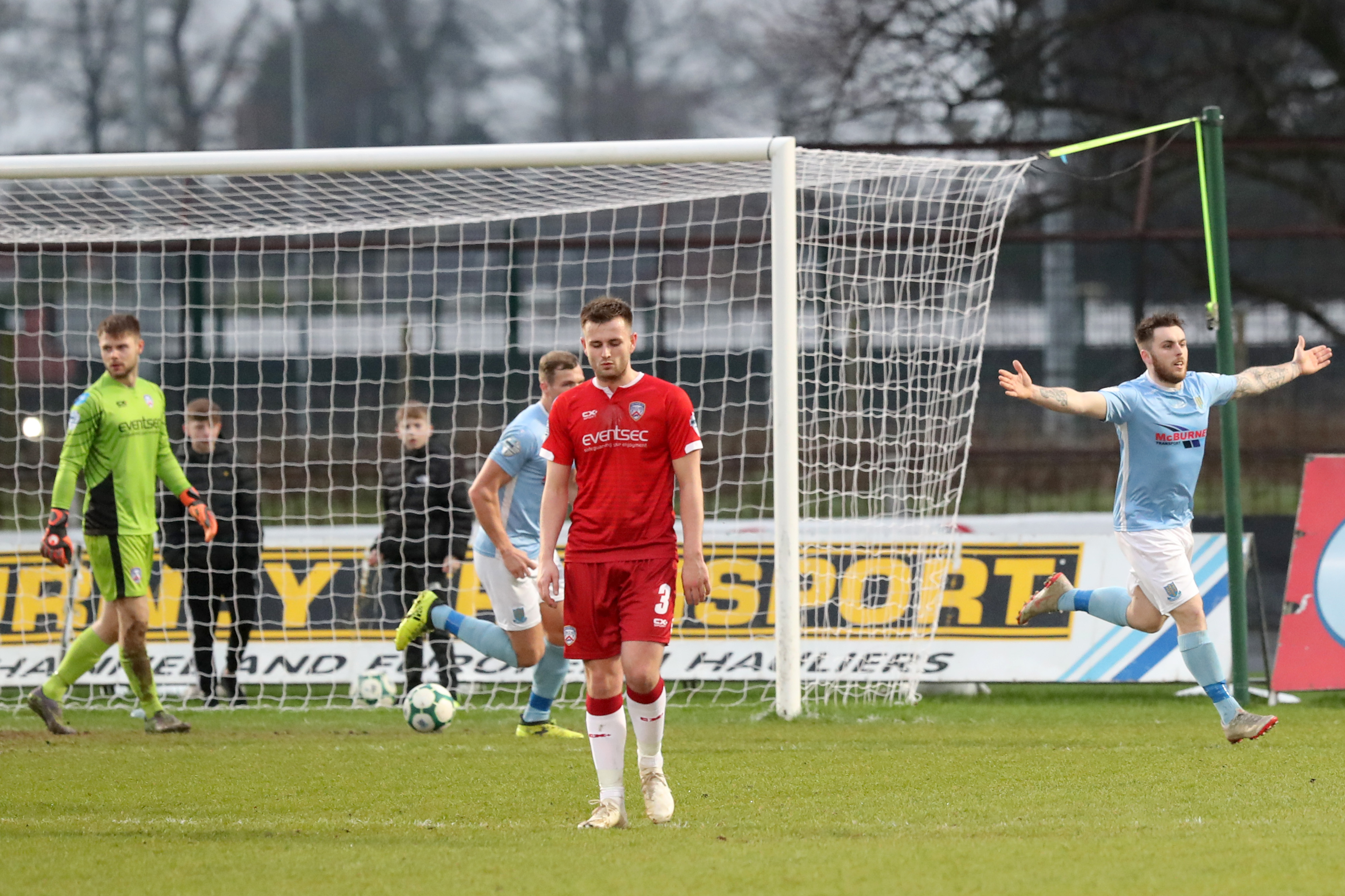 Ballymena United came from behind to share the Boxing Day spoils with Coleraine thanks to a last gasp equaliser from Johnny McMurray.

The two sides met for the second derby of the year in front of a sold out crowd at the Showgrounds. Neither side really got going at the start, despite Gareth McConaghie heading narrowly wide from a Josh Carson corner. With just 3 minutes played referee Arnold Hunter found himself brandishing a yellow card to James McLaughlin for a late challenge on Jonny Addis.

The deadlock was broken on 9 minutes by The Bannsiders. United failed to clear their lines from a cross and Andrew Burn's header went out only as far as Coleraine captain Stephen Lowry. His shot from the edge of the box was hit into the ground before going past Thomas McDermott to put Coleraine ahead.

The lead lasted just 4 minutes as United levelled from the penalty spot. Addis had a glancing header well saved by Chris Johns, but on the follow-up Adam Lecky was fouled by Adam Mullan. Despite the penalty problems Ballymena had against Ards on Saturday, there were no such issues this time as Cathair Friel sent Johns the wrong way to make it 1-1.

The penalty seemed to give Ballymena an expected lift and minutes later Lecky burst through and squared it for Friel, only for Aaron Canning to importantly cut the pass out.
With 27 minutes played Coleraine regained the lead after Ballymena failed to get the ball away again. A corner was cleared out only as far as Canning, who hooked the ball back into the box where James McLaughlin was waiting to fire the ball home for 2-1.

It was almost 3-1 in the very next attack as Carson was given acres of space in the middle but his shot was well saved by McDermott, as McDermott also saved from Ian Parkhill. At the other end Steven McCullough had a free kick saved at the near post by Johns. There was very little action at either goalpost in the closing 15 minutes of the half, with an influential Lowry flashing a shot inches wide of the post the closest either side came as the visitors led at the break.

The second half got off to a bad start for Coleraine as they were reduced to 10 men after just 4 minutes. McLaughlin had been on a last warning for some time and he was given a second yellow for a foul on Jim Ervin.
The Braidmen couldn't take any immediate advantage of the extra man advantage and on the hour mark David Jeffrey turned to McMurray on the bench, as he replaced Kofi Balmer.

As United continued to struggle to create chances, the 10 men of Coleraine stretched their lead to 3-1. Carson broke and found Ian Parkhill in the box, and he got the better of Ervin before cutting inside and curling an effort into the bottom corner.

Ballymena did well to react quickly with Lecky having a header cleared off the line by Lyndon Kane before the Sky Blues pulled a goal back. Leroy Millar's corner to the back post was met by an unmarked Andrew Burns who powered a header home to half the deficit.

The goal pushed Ballymena on who were now rallying for an equaliser. Johns pulled off a fairly routine double save to deny first McMurray and then Millar before sub Ryan Mayse miscued a shot wide following a long throw. Mayse's miss was the first in a string of chances for the sub. Mayse was picked out completely free at the back post by Millar and he hit a stunning volley, one that was technically difficult, only for it to be saved by Johns.

Inside the final 10 minutes Jude Winchester picked out Friel was an exquisite cross. The striker did well to get a head to the ball but his effort was again stopped by Johns who got down well to save. With 5 minutes left Johns was it again, stopping Mayse for a third time as his shot from the edge of box was met by the grateful hands of the 'keeper.

As injury time approached Ballymena's 17 game unbeaten run in all competitions looked to be coming to an end at the hands of their fiercest rivals. However there was to be late drama as not for the first time this season, McMurray came up with the goods with a vital goal at the death. A long Addis throw in was cleared to the penalty spot where Jonathan McMurray was waiting with a volley which found the bottom corner.

United weren't just settling for a point in added time and almost won it with a half volley from Mayse. The ball looked destined to go in only for Johns yet again get in the way, this time with a stunning fingertip save to secure a point.

Ballymena preserve their unbeaten run, extending it to 18 games, and remain at the league's summit as the Derby Day points were shared for the second time this season.