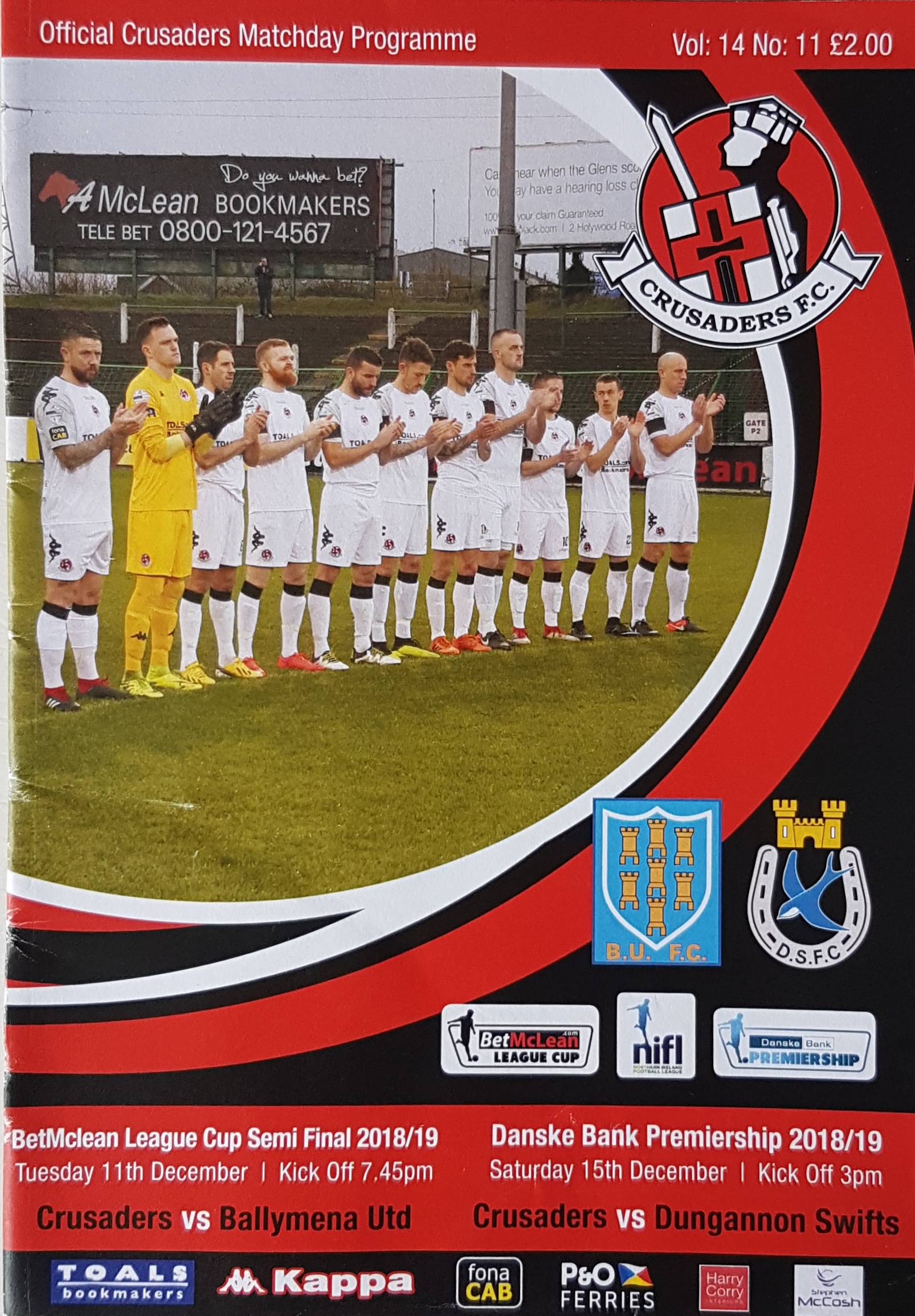 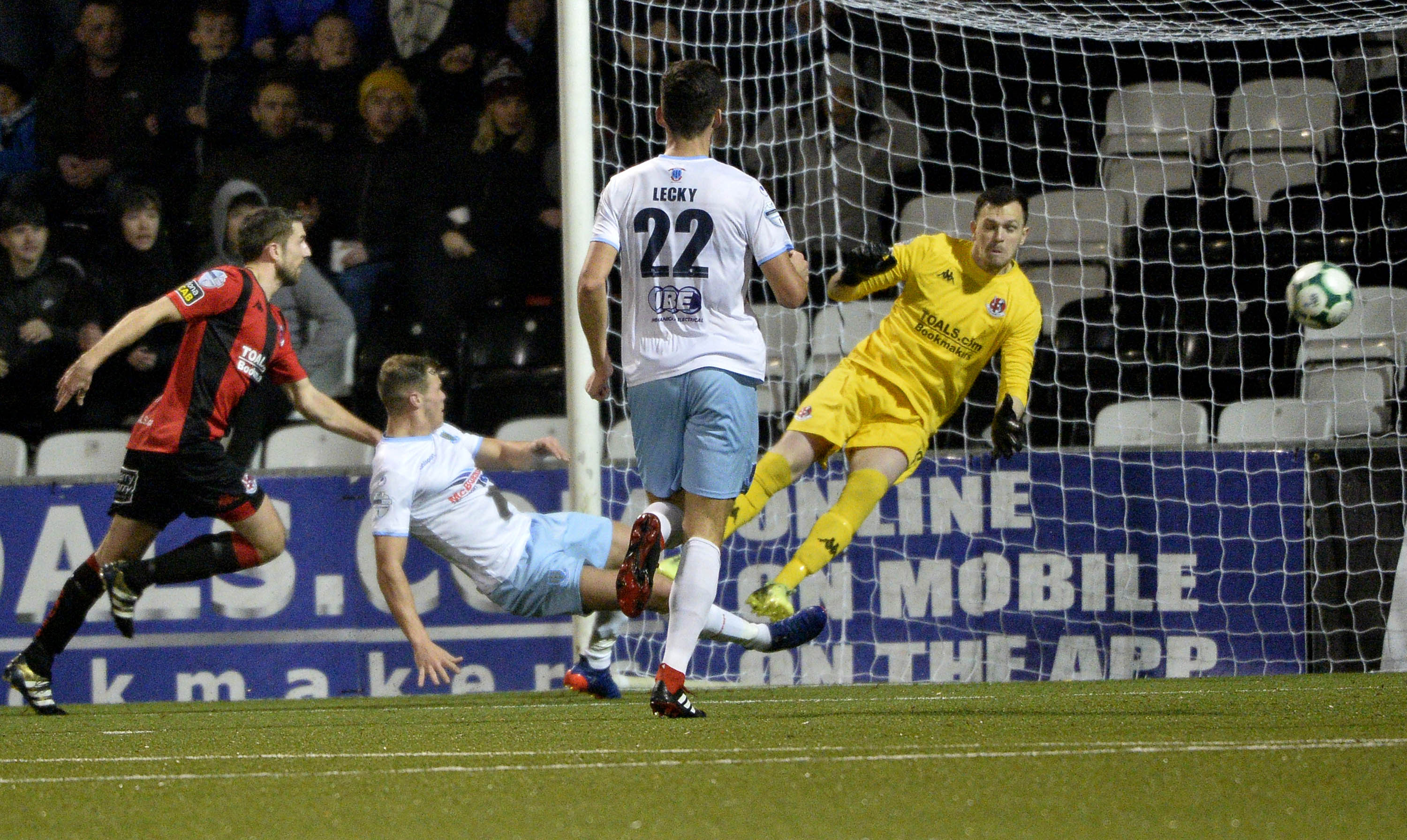 Ballymena United midfielder Leroy Millar broke the hearts of Crusaders at Seaview last night. The 23-year-old’s second half goal dumped Crusaders out of the BetMcLean League Cup semi-final – and booked his team a place in the decider for the fourth time in five years – incredible!

David Jeffrey’s boys, who are sitting proudly at the top of the League table, again displayed all the power and passion associated with a team that has now won a record-breaking 11 consecutive games.

In fact, United haven’t tasted defeat since September 29 when they were beaten by Linfield at Windsor Park.

Make no mistake about it, they were worth this victory and can now look forward to a big day out in the February 16 decider.

It was David Jeffrey’s Sky Blues that asked all the early questions. Crues goalkeeper Harry Doherty was forced to flick a James Knowles free kick over the crossbar after only five minutes after Leroy Millar had been flattened by Gary Thompson.

And they carved out another decent opportunity on 13 minutes when Rodney Brown’s botched clearance fell invitingly for Jude Winchester on the edge of the box, but he completely misjudged the bounce and totally fluffed his lines.

The wounded Crues attempted a response and they forced Thomas McDermot into an excellent save on 22 minutes when David Cushley’s corner kick eventually fell to Jordan Forsythe on the edge of the box only to see his left-footed effort clutched by the young shot-stopper on the line.

Then, Ross Clarke burst through the middle to try his luck from distance, but again McDermot showed a clean pair of hands.

But the home defence were continuously exposed with the lightning counter-attack and United were almost in front on 27 mminutes. Cathair Friel sent the impressive Millar galloping into the box and, after tricking his way clear, his low drive was superbly saved by Doherty.

United defender Steven McCullough then sent in a thundering drive from 30 yards that Doherty was relieved was relieved to see flash inches over the crossbar.

There was still time for Doherty to establish himself with two brilliant saves when he spread himself to get a finger-tip away a low drive from Millar before he repeated the act to deny Friel, somehow managing to push the striker’s downward header past the post.

The game erupted for all the wrong reasons on 55 minutes when Cushley appeared to push United skipper Jim Ervin into the perimeter fence, which sparked a free-for-all in front of both dugouts. Referee Tim Marshall duly booked Howard Beverland, Cushley and Adam Lecky when the dust settled.

After all his good work, Doherty was almost embarrassed when he left his line to deal with another McCullough free kick and, misjudging the flight of the ball, his outstretched glove managed to deflect over the top.

But United at last forged ahead on 68 minutes. Kofi Balmer’s raking pass sent Winchester hurtling down the left. He fired in a great cross that was knocked on by Friel for Leroy Millar to finish from six yards.

The home team attempted to come back off the ropes with Cushley’s cross being cleared to Philip Lowry, but he miss-hit his shot.

Crusaders thought they had levelled on 73 minutes when Cushley slotted home, but ref Marshall had already blown for a free kick after Gary Thompson had fouled McDermott.