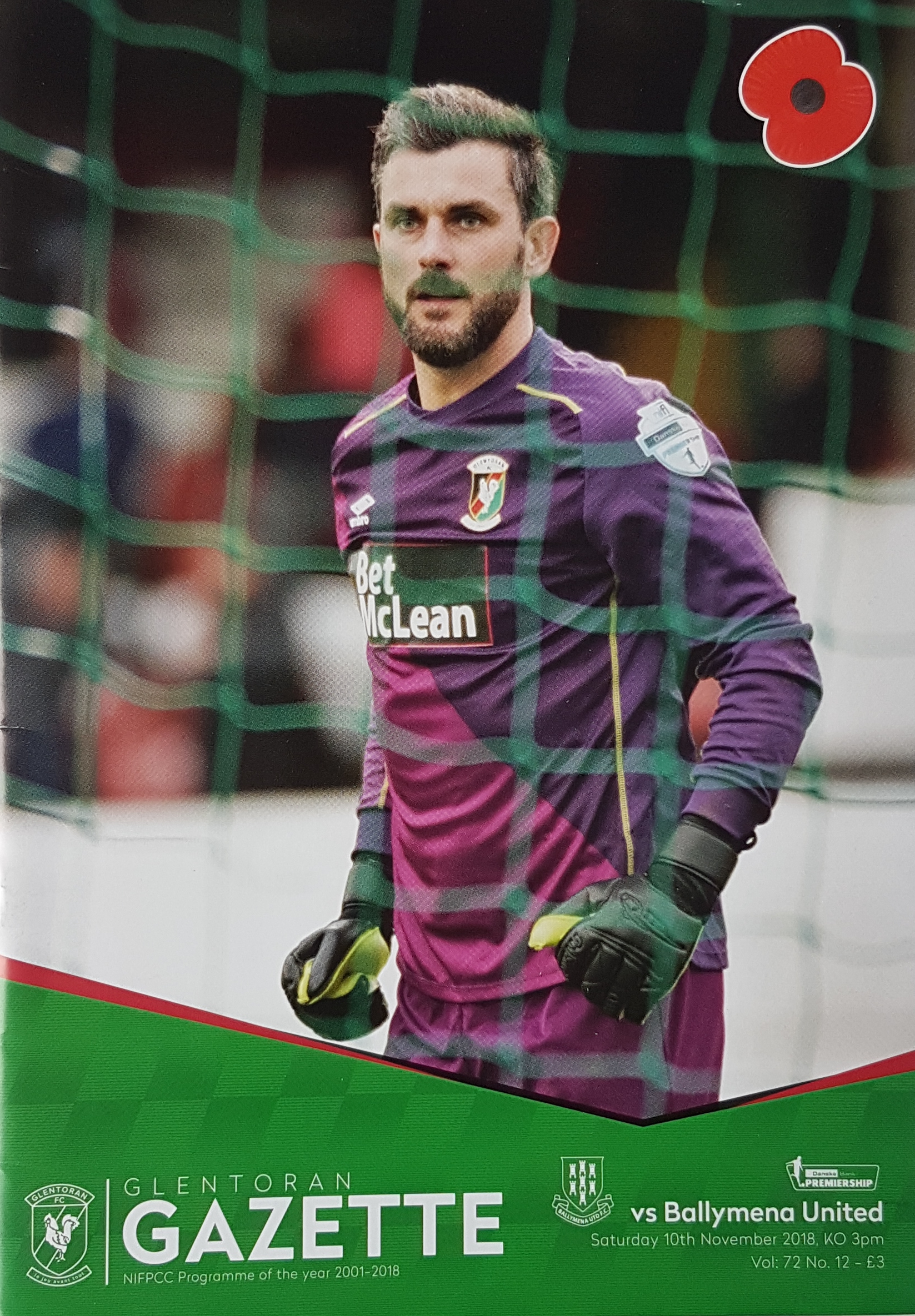 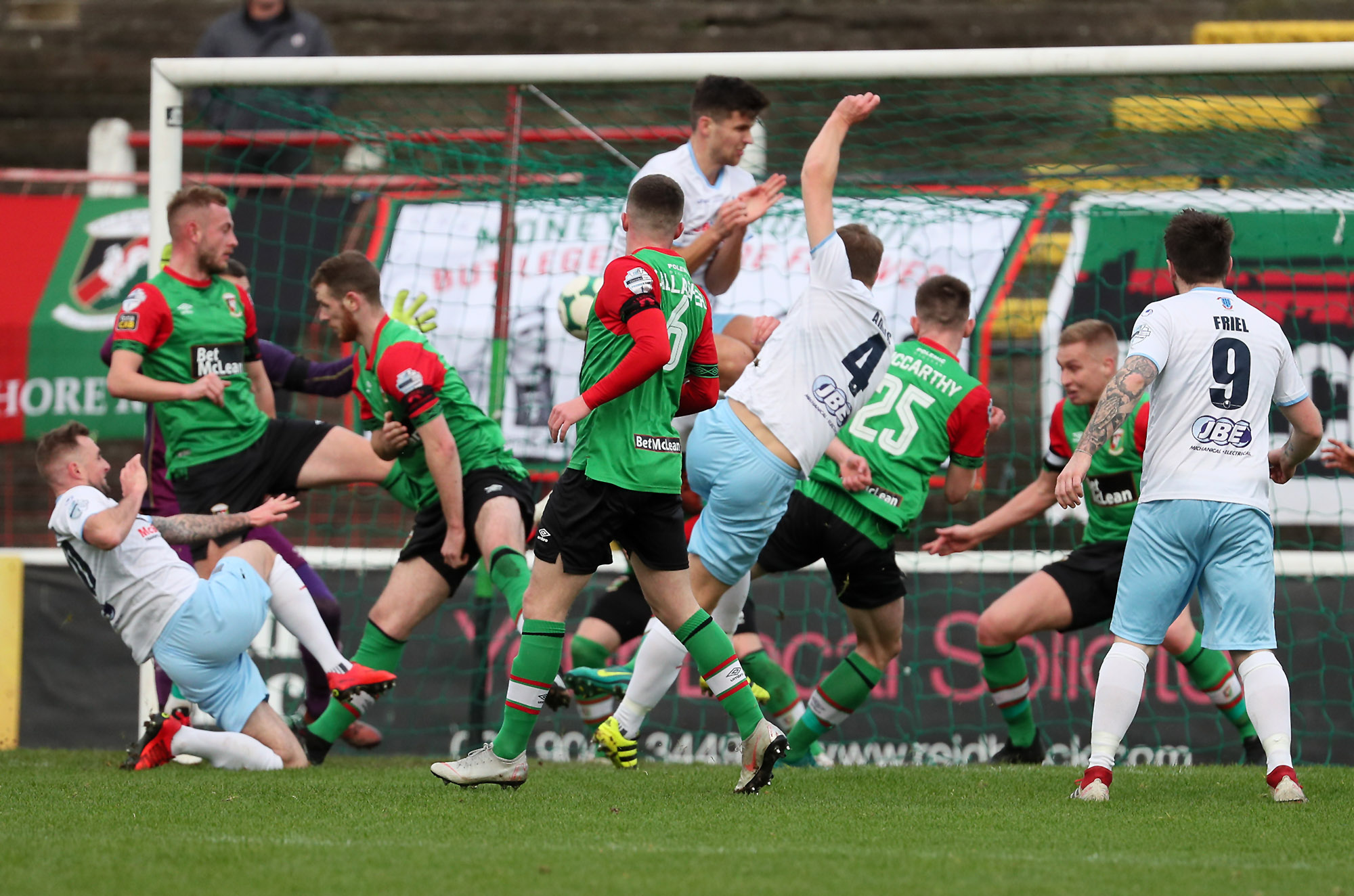 Jonathan Addis scored the only goal of the game as Ballymena United beat Glentoran 1-0 at The Oval on Saturday afternoon.

It was the first meeting between the sides this season and prior to kick-off a memorial service was held to mark the centenary of the end of the First World War.

United, looking to stretch their unbeaten run to 9 games, came out of the blocks quickly. Within 2 minutes Scot Whiteside had a header from a Leroy Millar cross acrobatically cleared off the line by Glens defender Joe Crowe.

Just a couple of minutes later a quick counter attack involving Millar, Adam Lecky and Steven McCullough ended with the latter having a cross just about turned wide of the goal by Crowe, with Millar waiting behind him. The home side's first effort on goal didn't come till the 11th minute, but Dylan Davidson's long range attempt sailed over.

On 14 minutes Ballymena took the lead as ex-Glens man Jonny Addis scored in his first game back at The Oval. A corner from Millar was only half dealt with by Elliott Morris and Jonathan Addis was waiting to smash a half volley into the top corner.

Cathair Friel was involved in a lot of The Braidmen's early attacking threat and he got himself on the end a through ball before having his shot saved by Morris at the near post. Shortly afterwards there was a similar chance at the other end as John Herron played one over the top for Robbie McDaid, but this time it was Ross Glendinning saving well at his near post.

For a 10 minute period in the middle of the half Glentoran looked a little more threatening, with Curtis Allen hitting the side netting from a tough angle before Davidson and Nathan Kerr both sent ambitious shots well over. On 34 minutes United were denied by a man on the line for a second time. Lecky showed sublime footwork on the byline and put the ball across goal for Millar, but Kerr was on-hand to make the block.
Towards the end of the half Ballymena's other summer signing from Glentoran, James Knowles, had strikes brush past both posts with low efforts from outside the box, while Lecky had a goal disallowed for a foul in the build up in between Knowles' near misses. Despite Glentoran having their moments, the Sky Blues had right to be disappointed as they went to the break just the one goal ahead.
After an entertaining first half, the second half became something similar after a slow start. 10 minutes in an awful clearance from Morris fell straight to Jude Winchester who found Andy McGrory, with his thumping long range effort smashing off the underside of the crossbar and back into play. On the hour mark Herron danced his way through Ballymena's defence but as he was about to get a clear shot away at goal, Knowles made a goal saving tackle.

Despite the Glens seeing a bit more of the ball, Ballymena continued to create and Lecky missed two big chances inside 5 minutes. Firstly, he was picked out completely unmarked at the back post from a Knowles free kick, but missed the target, heading over. His second chance came after Winchester did well to stay on his feet and play in Lecky, who really should've scored, even though he was denied by a smart Morris save.

Inside the last 15 minutes the hosts went close with Connor Pepper dragging a shot narrowly wide before Herron was denied twice. Herron had a header stopped on the line by Jim Ervin and seconds later he saw a fine effort on the edge of the box matched by a stunning Glendinning save as he tipped the ball over the bar. Inside 5 minutes of added time Pepper headed wide from a Davidson cross but United held on for another big three points to cut the gap to leaders Glenavon to five points.