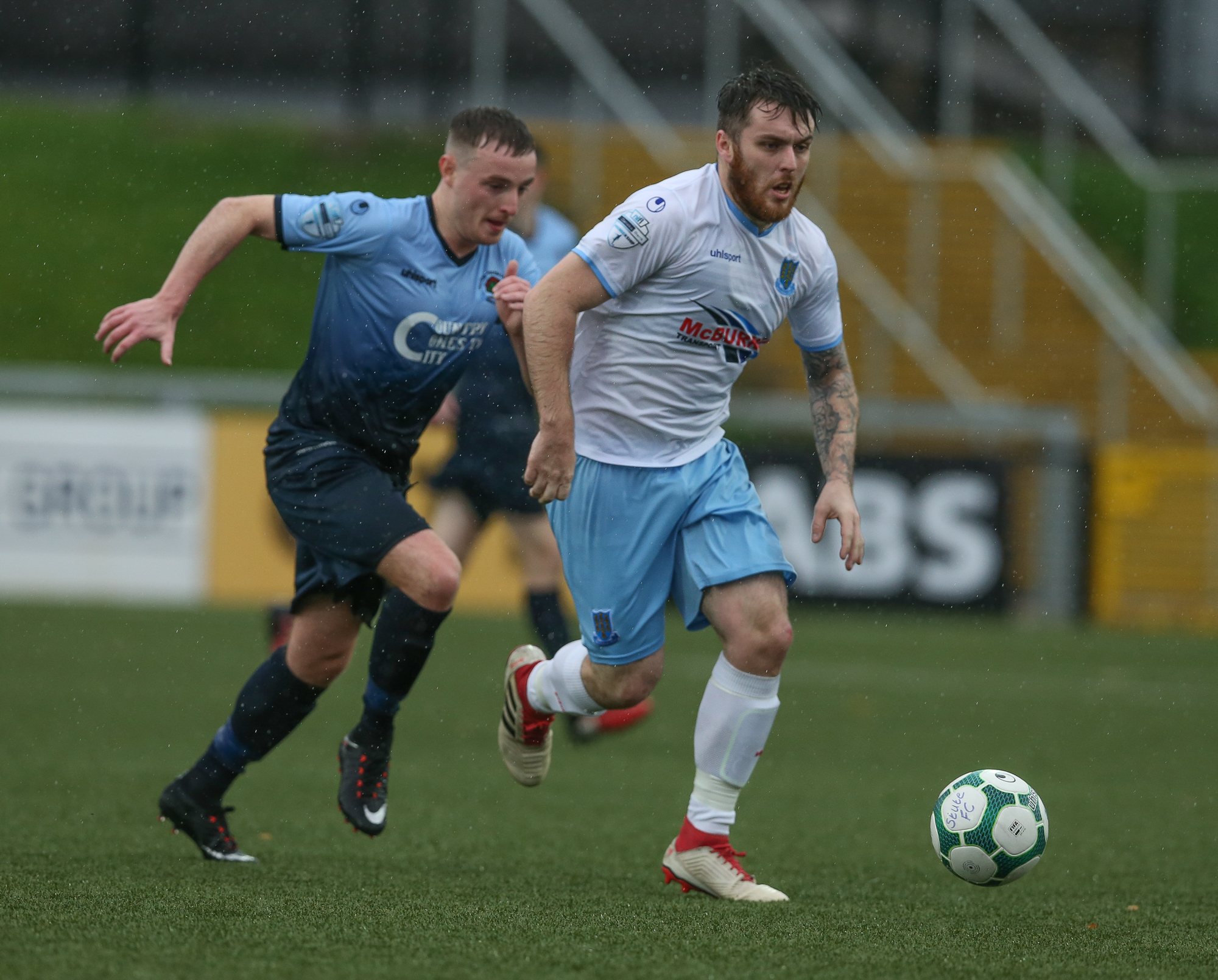 Ballymena United made it three in a row with a 2-1 victory over Institute at The Brandywell on Saturday afternoon.

It was a lively and even start to proceedings in a dreary North-West, were Leroy Millar was making his 100th appearance for The Sky Blues, with both sides happy to get the ball down and play. The first chance came on 9 minutes when Scot Whiteside conceded a free kick just outside the edge of the D. Michael McCrudden stepped up but fired the ball over.

United's first effort on goal came two minutes later via Andy McGrory with his volley from distance going into the arms of Martin Gallagher. Chances at both ends was a feature of the opening 20 minutes. A cross/shot from McCrudden from the right flashed across goal and went narrowly wide before Ballymena had the ball in the back of the net through McGrory, however it was ruled out after a handball from Adam Lecky in the build up.

With just 26 minutes gone the visitors were forced into an early change. Jude Winchester had been on the end of a strong challenge 5 minutes prior and couldn't continue, being replaced by Tony Kane. Straight after the sub Lecky was denied twice inside a minute by Gallacher. First a flicked header from the forward after a Kofi Balmer cross was tipped over by Gallagher. From the resulting corner Lecky produced a smart back-heeled effort which the 'keeper was on-hand to save again.

The last 15 minutes of the half were dominated by The Braidmen. The first in a string of chances was a header at the back post from Steven McCullough which hit the side netting. The next opportunity was almost a freak own goal from Dean Curry as he turned a header just over his own bar under no pressure. The final 5 minutes in the half produced openings for both teams. For United, a cross from McGrory was only cleared as far as Lecky inside the box, but with the goal gaping he put the ball inches wide.

In a rare attempt at the other end, a free kick from Ronan Doherty from a tight angle forced Ross Glendinning into a fine save. On the stroke of half time Cathair Friel missed a glorious chance to opening the scoring. An overhead kick from Kane fell to Lecky who teed up Friel in the box, but he fired over as the half ended goalless.
The second half got off to a frantic start, with 'Stute hitting the bar inside a minute. McCrudden played in Ronan Wilson after a flowing move, but with only Glendinning to beat, he shot over via the crossbar. 2 minutes later McCrudden had a chance himself after a one-two with Stephen Curry, but again he couldn't keep it down.

On 50 minutes United broke the deadlock thanks to Cathair Friel. James Knowles swung in a peach of a free kick and found the unmarked Friel who headed home his 6th of the season.

Institute continued their bright start to the half despite falling behind, with quick feet from Doherty creating a chance which he curled just wide. On 63 minutes Stephen Curry went close twice. After cutting inside he saw his effort deflect just wide before the same man headed the corner over.

A good move involving Friel, Lecky and Knowles ended with the latter getting a shot away from 18 yards out, but Gallagher was equal to it.

Having had a very strong penalty appeal somehow waved away minutes before, United were awarded a penalty with 20 minutes left when Balmer was brought down by McCrudden just inside the box. James Knowles stepped up and buried it into the bottom corner to give Ballymena a two goal cushion.

The last 15 minutes yielded very little by way of chances with Institute unable to trouble Glendinning. Near the end Ballymena almost added a third with a carbon copy of the first goal, Knowles finding Friel from a similar free kick, but this time Friel hit the crossbar.

Inside the 3 minutes of added time Institute pulled a goal back after McCrudden's ball across goal was tapped home by sub Joe McCready, but United held out for the 3 points to move up to 4th in the league table.