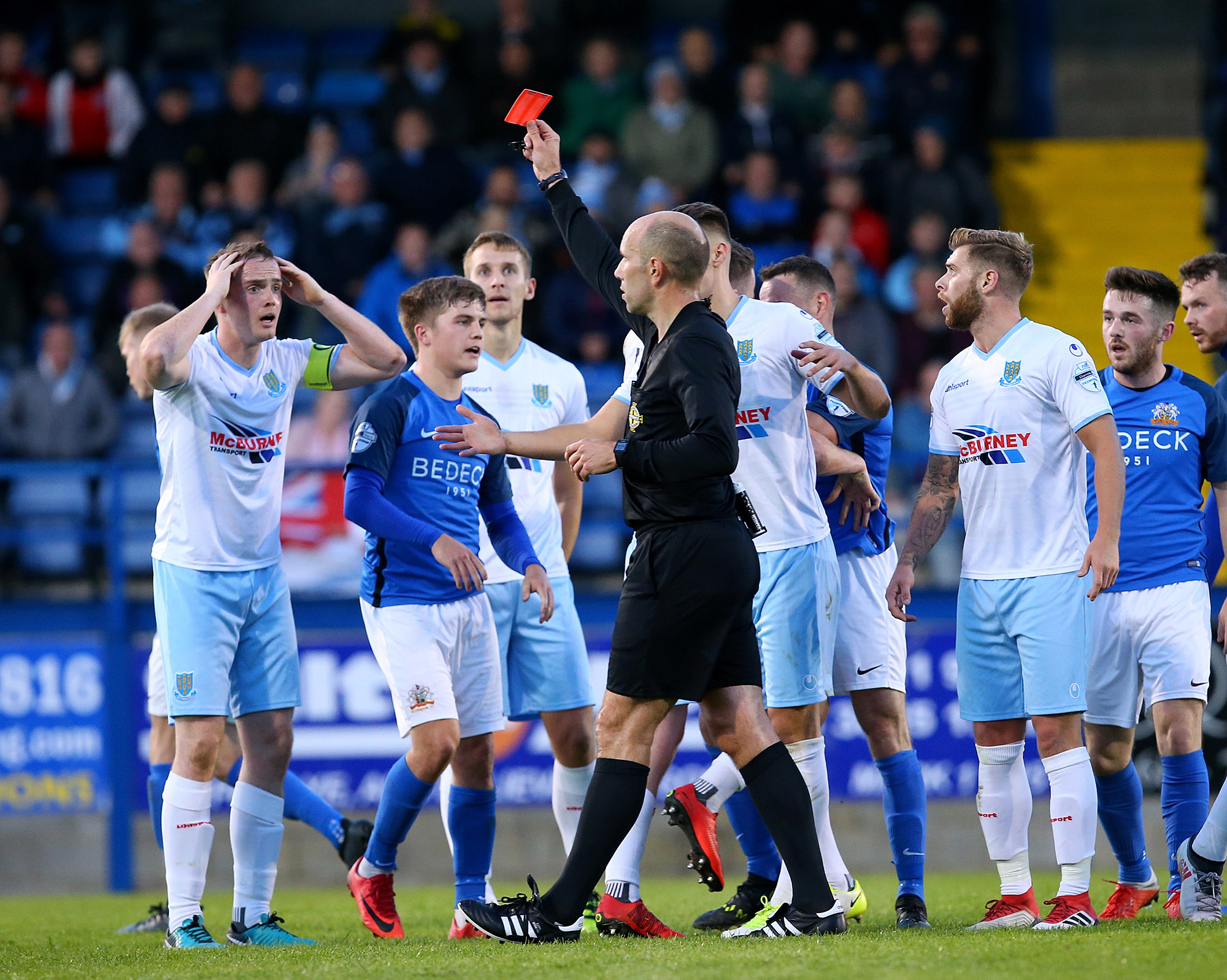 10-man Ballymena United suffered a first defeat of the season with a 4-0 defeat at Glenavon on Friday evening.

In front of a packed out Mourneview Park United were looking for a first win in Lurgan in over 6 years, but it was the hosts who started better. Inside the opening minute Andy Hall crossed for Stephen Donnelly and his shot almost diverted in off Andrew Burns. Ross Glendinning was called into his first piece of action on 4 minutes. Nice build up play between Andrew Mitchell and Donnelly ended with Josh Daniels getting a shot away, however it went straight into Glendinning's arms.

Following Glenavon's opening chances Ballymena impressed for the remainder of half. Steven McCullough almost gave The Sky Blues the lead on 25 minutes from a free kick. His low effort from just outside the box was headed for the bottom corner until it was well saved by Glenavon 'keeper Jonny Tuffey. Shortly after at the other end Donnelly wasted a decent opening for the home side. A cross in from Rhys Marshall landed perfectly for an unmarked Donnelly 12 yards out but he skewed his shot wide.

The closest either side came to a first half goal came 10 minutes from the break via the visitors, when a corner lead to a powerful Jonny Addis header which needed to be cleared off the line by Mitchell. The second ball into the penalty box fell to former Glenavon man Andy McGrory at the back post but his shot on the turn went narrowly over.

Ballymena had Glenavon firmly up against it approaching the final 5 minutes, Shane McGinty in particular causing numerous problems, passing players with ease. And it was McGinty who had the next effort on goal, but his attempt from all of 25 yards was dragged well wide.

On the stroke of half time came a massive turning point in the match. United skipper Burns received a straight red card for a strong challenge on Mark Sykes just outside the box. Despite getting the first ball, referee Steven Gregg adjudged the tackle to be out of control and produced the card, to the dismay of the United supporters. From the resulting free kick Mitchell drilled the ball wide of the post as a great half from Ballymena ended in disappointment, with the game still goalless.

Despite being a man down David Jeffrey made no changes during half time and Ballymena started the second half well, considering the disadvantage, without really threatening Tuffey.

The first chance of the half came The Lurgan Blues' way on 53 minutes but sub Ben Doherty blasted a shot over. A minute later James Singleton could've counted himself lucky to stay on the pitch after he pulled back Matthew Shevlin in a good position, whilst already on a booking.

From the resulting free kick Addis flicked a free header into the arms of Tuffey and 2 minutes later Glenavon had the lead. Hall sent Marshall clear on the right wing who cut the ball back for Aaron Harmon on the edge of the box, and he drilled a low shot past Glendinning to make it 1-0.
On the hour mark Shevlin landed awkwardly on his arm and looked in a lot of discomfort as he was replaced by Tony Kane. If United were still hurting from the first goal, things were about to get worse.

On 67 minutes it was 2-0, a long free kick floated in from sub Dylan King found Joshua Daniels at the back post and with nobody near him he headed home past a static Glendinning.

Ballymena needed something special in the final 20 minutes and Scot Whiteside had a chance in the box but shot well over. McGinty continued to look a threat and did well to work a cross from the by-line to Ryan Mayse at the far post, but his half volley went well over as well.

Any doubts about where the points where going were ended by substitute Stephen Murray who made it 3-0 on 76 minutes. Daniels did well to keep the ball alive by hooking it into the box from the by-line and he found Murray who produced a lovely first touch and turn before finishing expertly past Glendinning.

As if to add insult to injury, Daniels and Doherty worked their way down the left wing with ease before the latter crossed for Andrew Hall who had an easy finish from close range to make it 4-0.

In added time Murray almost netted his second but put a header wide as it finished 4-0.