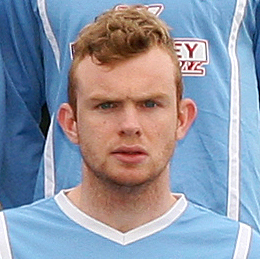 Creative central midfielder signed by Roy Walker in 2010 spent two seasons at the Showgrounds after moving from Bradford City.

The Millisle born player packed his bags and made the move to full-time football in the summer of 2007 as a 16-year-old, with English third tier side Bradford City on a two year deal. Highly regarded at Valley Parade, Rory worked his way through the youth and reserve teams to the fringes of the clubâs first team during his first two seasons at the club and also had a short spell at then Unibond League side Salford City. Although his spell at Salford was cut short by a metatarsal injury, he was rewarded for his progress with his first professional contract in May 2009, one of only three players from his age group.

The one-year deal with the Bantams was meant to be the springboard to the first team but the midfielder, who had represented his country at Under-17 and Under-19 level by this stage, struggled to make the breakthrough and seen out the 2009/2010 season at Ossett Town in the Northern Premier League before the expiration of his Bradford contract and confirmation that a new one would not be forthcoming.

Carson spent the summer in England trying in vain to secure another deal with a professional club, but eventually returned to Northern Ireland and taking up Ballymena United manager Roy Walkerâs offer firstly of a trial and then a one-year deal at the Showgrounds in August 2010. There was little time to adjust to part-time football for Carson, whose time at Warden Street was plagued by niggling injuries â but he found a keen admirer in his talents from his new boss, Walker, who compared his new signing to that of Frank Lampard.

United struggled during the 2010/2011 campaign with Rory cutting a frustrated figure, but a one year contract extension follow/ This inconsistent form of both parties continued for both parties into December 2011 when Walker resigned following defeat in the League Cup semi-final. Glenn Ferguson came in and the midfielder suddenly found himself back in the team and thriving in the engine room as the Sky Blues finished the campaign having gone 12 games unbeaten.
Unfortunately for Carson, he was deemed surplus to requirements in May 2012 by Ferguson as he started his rebuilding job at the Braid. Having returned to full-time education, the 21-year-old sought refuge closer to his County Down home and joined Amateur League side Comber Rec. ahead of the 2012/2013 season. He went onto spend two and a half seasons at the club, before being lured back to Irish League football by Niall Currie at Ards on transfer deadline day in January 2015.

Now working full-time for the BBC, Carsonâs appearances for the Championship 1 side were curtailed by work commitments on Saturdays, but despite this he was retained by Currie for the following 2015/2016 as he helped the North Down side to the Championship 1 title and also played in the League Cup final defeat to Cliftonville. By this stage, the midfielder was now residing in Manchester for work and commuting to Ardsâ games, so following promotion the decision was taken that he wouldnât able to commit to the rigours of the top flight.