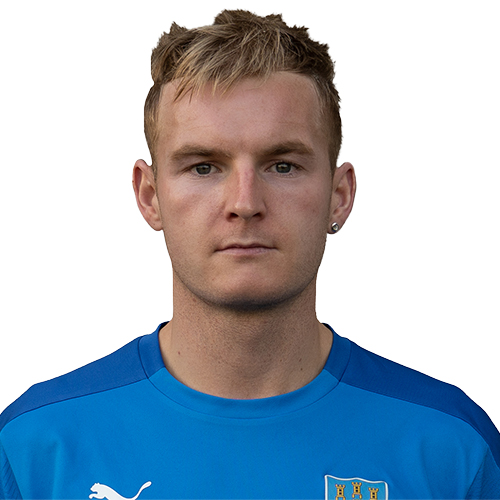 Local central defender who had two spells with the Sky Blues during the start of his career.

Boyhood Ballymena United supporter, who first made his mark with the club winning the Harry Cavan Youth Cup in 2009 as an 18-year-old having been part of the Ballymena United Youth Academy. First team manager Roy Walker had shown interest in the Cullybackey born defender and brought him onto the panel in August 2009 but with opportunities limited, Rodgers walked away from his hometown club to try his luck with Coleraine.

Chances were equally few and far between in the first-team at the Ballycastle Road, but he was included in Coleraine's North West Cup Final starting eleven as they were defeated by Institute in November 2011.

Walker coaxed the maturing defender back to Warden Street in July 2011 and started the 2011/2012 season as first choice at the back, a period out of the team coincided with a change in manager as Glenn Ferguson came in an showed faith in the 21-year-old who found a starting place for Chris for the remainder of the season and a new two-year contract followed.

Despite being an unused substitute in the County Antrim Shield final victory over Linfield, Rodgers endured a frustrating second full season in the first-team with long spells out of the team as Ferguson's continually tried to find alternative solutions to a chronic leaky defence. In May 2013, Rodgers was transfer listed as Ferguson advised that first-team opportunies may be limited going forward - he had made 42 appearances scoring twice for the Braidmen.

On the August 2013 transfer deadline day, the defender had the remainder of his contract settled and agreed to join Championship 2 neighbours, Wakehurst. That deal lasted until January 2014, when David McAlinden swooped to sign him on 18 month deal at Larne. However, two serious knee injuries followed which curtailed his early promise at Inver Park but established himself as a key figure from the start of the 2015/2016 campaign.