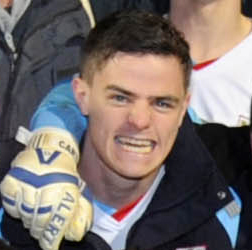 Teenage winger who made only four appearances for the Sky Blues but picked up a County Antrim Shield winnersâ medal in one of them!

Newtownabbey native, Bingham, started to break through at local side Crusaders before leaving in search of first team football to Coleraine during the summer of 2011. Bingham found himself on the periphery of Oran Kearneyâs side in the North West but failed to break through during the 2011/2012.

Ballymena United Reserve team manager David Dorrian persuaded Bingham to try his local down the road with the Sky Blues in August 2012. Following some impressive performances down the flanks for the second string, Glenn Ferguson showed faith in his youngsters following an 8-0 mauling by Cliftonville â making wholesale changes for a trip to Windsor Park to face Linfield, in which Bingham made his debut.

An assured performance from the 19-year-old allowed him to retain his place for the next game â the small matter of the County Antrim Shield final against the Blues three days later! Bingham started his second game in the final which the Sky Blues dramatically won on penalties and earned William a first senior winnersâ medal. His season unfortunately petered out quickly after that, making only two further apperances and being subsequently released in May 2013, with Ferguson disappointed that he didnât âkick onâ from his early success.

A short spell at newly promoted Ards followed at the start of the 2013/2014 season and his only other spell in Irish League football was a season with Lisburn Distillery in the NIFL Championship during 2014/2015. Bingham has more recently been plying his trade in the Amateur League firstly with Nortel, and then more recently, with Ards Rangers.