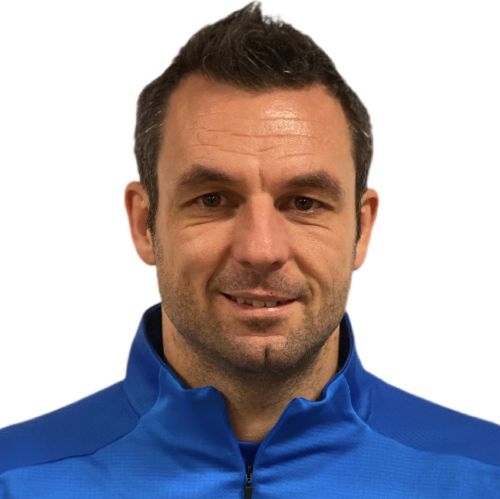 An inspired signing by Glenn Ferguson in January 2014, Ervin joined the Sky Blues after over almost a decade at Linfield and quickly became a firm favourite and a natural choice as club captain at the Showgrounds.

Born and bred on the Shankill Road, Jim Ervin started his football career as an apprentice at Nottingham Forest, but despite winning caps at various under-age levels for Northern Ireland, his two-year spell at the City Ground ended in 2004 without a contract or a single first-team appearance. Despite guesting for Kenny Shielsâ Ballymena United in a pre-season friendly, there was only one club he was going to sign for â his boyhood club, Linfield. The full-back signed for David Jeffreyâs reigning league champions in August 2004.

Ervinâs spell at Windsor Park coincided with a spell of domestic dominance by Jeffreyâs South Belfast Blues, as the defender was an almost constant figure in the side, personally winning six Irish League championships and four Irish Cups amongst the 14 medals won during nine and half seasons with Linfield â which included an historic âClean Sweepâ of all domestic trophies in 2004/2005. Jim Ervin made 298 appearances and scored 22 goals for Linfield, with his final appearance coming in November 2013. He was granted a testimonial in July 2014, despite having then left the club â a sign of the affiliation offered to the likeable defender.

David Jeffrey granted the then 28-year-old a free transfer, and despite interest from Coleraine, Ervin joined his former Bluesâ team-mate Glenn Ferguson in January 2014 and was drafted straight into the team, making his Sky Bluesâ debut in the Irish Cup fifth round tie with HW Welders. Ervinâs leadership and form was instrumental in his new team reaching the final of the same competition for the first time since 1989, but it proved to be a nightmare afternoon for Jim as not only did United lose the showpiece final to Glenavon, but he ruptured his cruciate ligament and left the game on a stretcher.

Ervin was out of football for almost eight months and his next start was ironically another Windsor Park final, as he was drafted back into the side for Unitedâs League Cup final defeat to Cliftonville in January 2015. Following a full recovery, Glenn Ferguson made the bold appointment to name the experienced defender as club captain, replacing Allan Jenkins with the Scotâs blessing as the manager preferred a locally based leader of his team. It was eventually third time lucky for Jim in Ballymena cup finals, as he captained his side to victory over Linfield in the County Antrim Shield in January 2016, he described the win as a âvery special moment in his careerâ.

Jim was re-united with his former manager David Jeffrey in March 2016 and also completed 100 appearances for the Sky Blues in November of the same year.