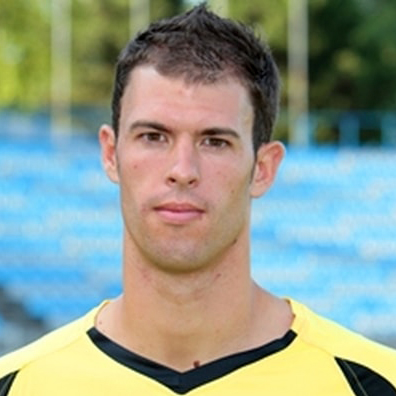 The clubâs only ever French player who signed on a short-term emergency loan in January 2014 from Crusaders during an injury crisis between the sticks.

Born in Thonon-Les-Bains, a Swiss border town in France, Yohan began his football career as a youth team player at Auxerre before a move to Lille OSC in July 2003. The goalkeeper made his senior debut a year later in the UEFA Intertoto Cup for Lille against Dinamo Minsk in July 2014 at the age of 19. It was the custodianâs only senior appearance at the club, as he spent the majority of his time with the âBâ team and also had a season on loan at LâEntente SSG in Championnat National (Franceâs third tier).

Lacroix left his native France in 2008 after his contract at Lille ended and moved to Greece to join newly promoted Thrasyvoulos. His stay only lasted a single season with his team relegated from the Greek Super League, after finishing bottom of the league. In a landmk move, Yohan became the first European player to play in Singaporeâs S-League in 2010, as he joined Etoile, winning both the League Championship and League Cup in his first season. His impact secured a move to Tampines Rovers in 2011 and a second consecutive league Championship followed.

His footballing odyssey continued in January 2013 when a move back to Europe with Stephen Baxter signing the goalkeeper as cover for the injured Sean OâNeill. His debut shortly after signing was a stellar 2-1 victory over Linfield but then a few weeks later the goalkeeper self confessed ânightmareâ as the Crues lost 4-0 to derby rivals Cliftonville in the League Cup final. Following OâNeillâs return to the side, Yohanâs appearances were soon limited at Seaview.

In January 2014, following injuries to Dwayne Nelson and Stuart Addis â Glenn Ferguson called in a favour from Baxter to loan the goalkeeper for four games and also kept a clean sheet on his debut on New Yearâs Day against Ards. Restricted from playing in Irish Cup games, Ferguson also signed Southern âkeeper Aaron Shanahan from Dundalk which curtailed any longer-term interest in retaining the Frenchman who returned to North Belfast at the end of January 2014.

Crusaders proved to be Yohanâs final senior club, as having moved into the business aspect of football during his stay in Singapore, he continued to work full-time with both the Irish FA and the new NI Football League whilst in Northern Ireland. A commercial media partnership opportunity in Geneva linked to UEFA in 2014 effectively drew to an end to Lacroixâs playing wanderlust, but has undoubtedly opened up a new path in professional football.