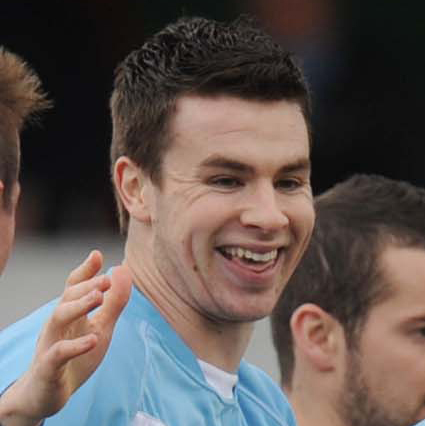 Local lad Mark Kelly, only appeared on the scene in February 2014 and disappeared just as quickly despite scoring in an Irish Cup semi-final in-between for the Sky Blues.

Formerly a pupil of St. Louis Grammar where he had scored the winning goal in the 2007 Schoolâs Cup final. Mark had appeared for Chimney Corner before a soccer scholarship in Denver, Colorado. The burly striker had also had a short spell with Institute in 2011, but the majority of his formative sporting years were spent playing Gaelic football.

Markâs coach in Colorado was none other than former United Irish Cup winner Tony McCall, who alerted his brother Joe (Unitedâs Head of Youth Development) and after joining in January 2014, an impressive cameo off the bench away against Coleraine in February 2014 was a positive first impression for Kelly. Despite not forcing his way into Fergusonâs starting eleven during the second half of the 2013/2014 season, he wrote his name in the history books with an Irish Cup semi-final goal against Queenâs University at the Oval â the third in a 3-0 win.

Kelly wasnât included in the panel for the 2014 Irish Cup final, and despite the managerâs attempts to retain him â he was released in August 2014 and subsequently moved to England, drifting out of football altogether after only half a dozen appearances for United and one memorable goal.