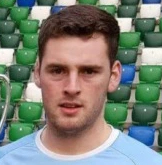 Youth Academy graduate defender who was given a first team debut at 18-years-old by Glenn Ferguson in August 2015.

Ahoghill born and a lifelong United fan, Crawford joined the club from Carniny Youth and was swiftly elevated from the Thirds to the first team for a surprise debut against Coleraine in August 2015 in light of a defensive crisis for manager Glenn Ferguson. Following the 2-0 defeat, Crawford drew unfair public criticism from Ferguson and it proved the young defenderâs only involvement with the first team squad during the 2015/2016 season.

Undeterred Crawford went onto captain Ballymena United Thirds to the final of the Harry Cavan IFA Youth Cup in April 2016, unfortunately Clifford Adamsâ young side were defeated 4-1 in the final by Crusaders Colts. In August 2016 first team manager David Jeffrey sent the central defender out to Championship side Knockbreda to gain first team experience, however he returned closer to home to join former coach Clifford Adams at Wakehurst in January 2017, with the âHurst chasing promotion from the Ballymena & Provincial Intermediate League.